The NFL's Most Wanted Man 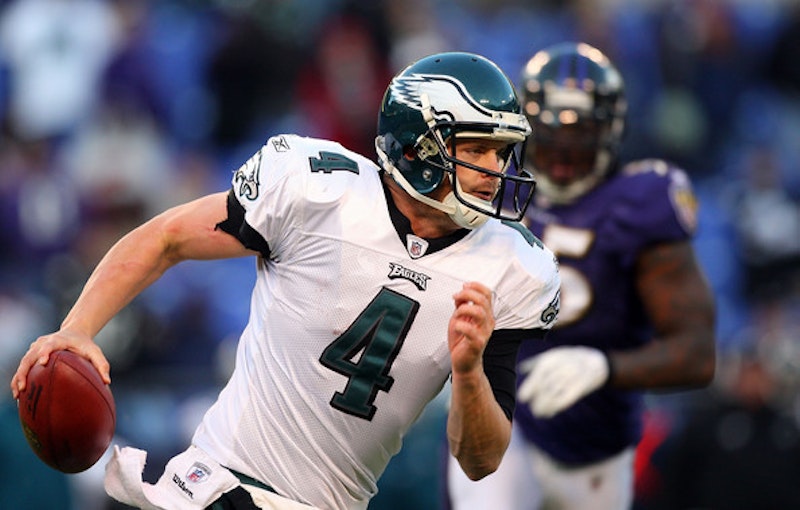 No, I'm not referring to that stupid asshole James Harrison. This is about Philadelphia Eagles backup quarterback Kevin Kolb. The general assumption is that the NFL lockout will be lifted sometime over the next few days kicking off a week-long frenzy of free agent signings and trades. Sounds good, but I'll believe it when I see it.

One of the names bandied about over the past few months has been that of the Eagles rather nondescript clip-holder. Kolb opened last season as Philadelphia's starting QB after the Eagles jettisoned Donovan McNabb. Kolb was ballyhooed as the team's next "franchise quarterback," proof that the term is overused. Up to that point Kolb hadn't done much on the field to warrant such praise.

Kolb lasted about 20 minutes in the season opener before a concussion sent him to the sidelines. In Kolb's absence Michael Vick displayed improved accuracy from his Atlanta days and just as much speed. Vick was exciting and a bit dangerous. Kolb was the overhyped white guy who couldn't stay on the field. Perhaps the perception was a bit unfair but NFL fans, especially those in Philly, can be unforgiving.

Despite starting just six games in his four-year career, Kolb is drawing strong trade interest from clubs desperate for quarterback help. Kolb may prove to be a dependable NFL signal caller but to this point he has a career 73.2 passer rating and a lackluster touchdown to interception ratio of 11/14. If not for the lockout Kolb likely would have been dealt during April's draft. Instead he and the Eagles watched as potential suitors like Minnesota and Tennessee drafted their quarterbacks of the future.  San Francisco remains a possibility but the 49ers will likely re-sign the enigmatic Alex Smith. The general consensus is that Kolb will end up in Arizona.

The Cardinals have reportedly offered former Pro Bowl cornerback Dominique Rodgers-Cromartie straight up for Kolb. The Eagles may want draft picks included in the deal, but given Philly's lack of depth at corner, and Kolb's spotty track record, a one-for-one swap seems fair. I've read that Kolb and All Pro Receiver Larry Fitzgerald of the Cardinals have met to discuss next season. Perhaps Kolb to the desert is the NFL's worst kept secret. If the Eagles can get a starting corner to fill a major defensive weakness they should take the deal and run. Kevin Kolb is no lock to lift Arizona from the ashes of their 5-11 record in 2010 but he should at least make Fitzgerald a more consistent fantasy performer.