The Rays' Andrew Friedman Can Call His Shots

Upton, Farnsworth, Shields: Trade them all. 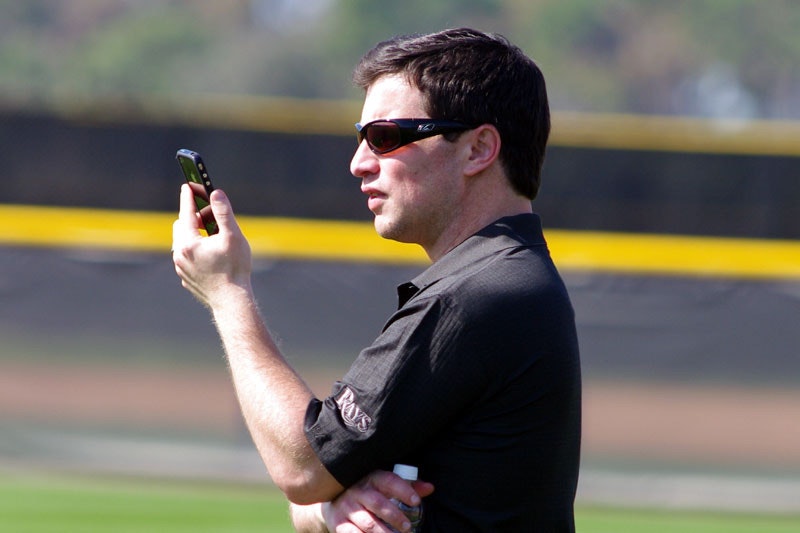 Tampa Bay’s General Manager Andrew Friedman is in an enviable position. Yes, the Rays are 9.5 games out of first place (as of July 25), making them a long shot for the playoffs, but the idea of them competing with the offensive juggernauts that are the Red Sox and Yankees, especially with Evan Longoria out for so long, was a little silly to begin with. Sure Tampa Bay could make a push for October—they have the prospects to make a big splash—but with no money to spend, why bother? Instead, they should sell. I’m not the first one to propose the following scenario, analysts have talked about it for weeks, but they’re thinking small-scale. Trading B.J. Upton or Kyle Farnsworth or even James Shields is one thing, but why not trade them all?

The idea appears impractical at first. The underperforming other-Upton-brother is one thing, since he’s a free agent after 2012 and is getting pricey through arbitration, but why Shields or Farnsworth? Farnsworth is having the best season of his career and is cost effectively controllable through next year, with a $3.3 million club option. His typically high walk rate has significantly dropped from a career 3.78 BB/9 to this season’s 1.77 BB/9. In correlation, however, his K/9 has also dipped, plunging all the way to 7.08. If FIP and history are any indication, Farnsworth will revert to his old self, which is why Friedman needs to sell high. Relievers like Heath Bell and Leo Nunez have shown more consistency, but in addition to them having worse 2011’s then Tampa’s closer, they are also free agents at the end of the season. In a market flooded with right-handed relievers, Farnsworth is the best, and Friedman could get a couple solid B prospects for the bullpen arm.

Shields is a different case entirely. Big Game James has finally emerged as a full-blown ace. After a couple of years of flirting with the title—Shields had two consecutive bad seasons—but has now redeemed himself with a Cy Young caliber performance so far in 2011. Always an innings eater, the 6’4” right-hander is carrying a 2.53 ERA to go along with his usual high strikeout rates. But how long can he keep this up? Aside from HR/9 and BABiP, which is a microscopic .259, his numbers on the season are nearly identical to his career norms. That means regression is imminent. With three manageable club options attached to his contract, Shields is extremely valuable at the moment. Given the diluted market for starting pitching, Tampa’s ace could fetch more than Matt Garza did last winter. The Reds and Cardinals have already expressed interest, but the Rays apparently have no intent to move the hurler. That could all be a ploy though, especially considering the prospects that could be acquired through such a blockbuster deal. Devin Mesoraco, a right-handed catcher in Cincinnati’s AAA affiliate, could be a potential centerpiece. Additionally, Zack Cozart, Yonder Alonso, and Travis Wood might attract some interest. The Cardinals’ Colby Rasmus has been a longtime target of Friedman’s, and when paired with one of St. Louis’ stud pitching prospects Shelby Miller and Carlos Martinez, a trade could be hard to resist.

Upton is the most likely of the three to be moved. The lazy centerfielder is consistently chastised for lack of hustle and has been benched on numerous occasions for attitude problems. It would all be worth it if he only performed like his brother Justin and lived up to all the hype he received. Five-tool prospects are often not all they’re cracked up to be; just look at Jeremy Hermida. Even so, teams will look past the low batting average, high strikeout rate, increasing salary, and overall grumpiness because of the upside he offers. The Nationals have had long interest in the righty, but the Rays might match up better with Philadelphia. Looking for a right-handed power bat, the Phillies also like Upton’s defense and speed on the basepaths. Jonathan Singleton, a Philly first base prospect blocked by Ryan Howard, would be a perfect fit for Tampa Bay, who need of a long-term replacement for Casey Kotchman