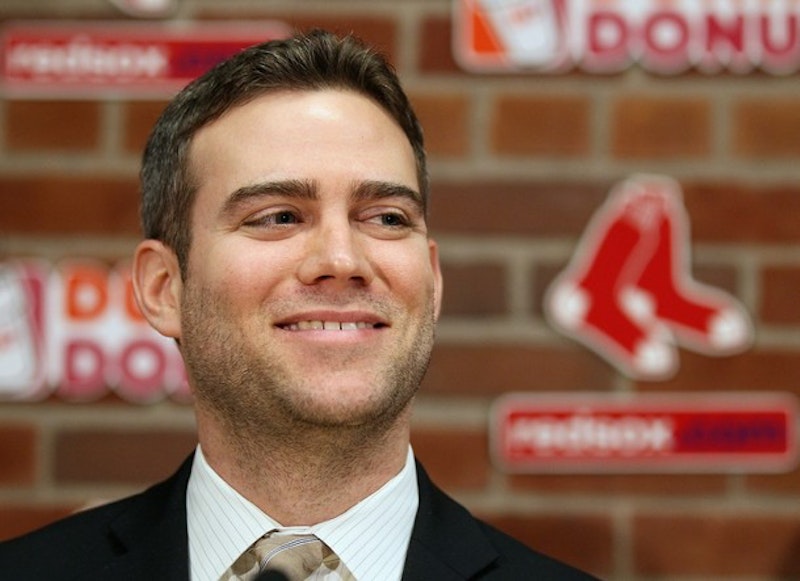 As the July 31st trade deadline approaches, fans throughout New England are desperate for information on who Boston GM Theo Epstein will try to acquire in order to improve the first-place Red Sox. Pitching is an obvious need, but with the current market so bereft of quality starters, Epstein might have to go in another direction. Two areas of strength, the lineup and the bullpen, could instead be upgraded to an elite level.

After last winter’s Adrian Gonzalez trade, the Sox’s farm system is fairly bottom-heavy with high upside teenagers who don’t command a presence in negotiations. Sean Coyle, Garin Cecchini, and Xander Bogaerts will one day lead Boston’s top prospects list, but as of now, they’re just high-ceiling infielders that won’t reach the Majors (if at all) until 2015. Jose Iglesias, Anthony Ranaudo, and Will Middlebrooks, however, would draw heavy interest from opposing clubs. Deemed untouchable in December, Iglesias has likely lost that veneer, and deservingly so, because of his utter lack of offense in AAA. Already armed with Gold Glove defense, the Cuban defector has shown no talent with the stick so far this year. He’s not hitting for contact or power, and he’s certainly not showing off his on-base skills. Still, Iglesias’ Ozzie Smith-like defense is what’s keeping his trade value afloat, and because of that he could still be a centerpiece in a blockbuster deal.

Middlebrooks, on the other hand, is playing a little over his head. Bolstered by a .376 BABiP, the fleet third baseman is having by far the best season of his minor league career. With a .310/.357/.500 slash line, the youngster is putting up impressive numbers in AA, but his batting average is sure to regress as the season goes on. According to ESPN’s Keith Law, in his recent Top 50 Prospects update (where he ranked Middlebrooks 42nd overall), “He still has to work on recognizing off-speed pitches and working the count. Otherwise, he should be a plus defender at third who hits 25-plus homers.” With third base already locked up for the foreseeable future by Kevin Youkilis, Middlebrooks could be an excellent piece in trade talks.

Anthony Ranaudo has the pedigree that all scouts love. Drafted in 2010, Ranaudo was originally projected to be selected second overall, but injuries dragged down his performance along with his draft slot, which is why Boston could nab him with the 39th choice. Pitching to a 4.46 ERA in high A isn’t very impressive, but scouts still like his stuff and he often projects as a solid #2/#3 starter, earning him the distinction as the current top prospect in Boston’s minor league system. If made available, these three players could draw a significant haul for the Red Sox and all but assure that they’re still playing in October.

A good starting pitcher is exactly what Boston needs. The key word there is good. The current hurlers available, however, either fall into the category of mediocre or unobtainable. The Dodgers’ Hiroki Kuroda was a strong, realistic option who could help the Sox eat innings and keep the scoreboard free of crooked numbers, that is until a report came out that he wouldn’t accept a trade to the East Coast. Starters like Bruce Chen and Edwin Jackson would hardly be upgrades, while Ubaldo Jimenez and Wandy Rodriguez can only be acquired for a prohibitive return. That’s why Epstein should instead strengthen his offense and bullpen, which both lead the league in WAR. The market for right-handed relievers and corner outfielders is flush right now, so why wouldn’t Boston pounce? The rotation, although shaky, might work itself out. Jon Lester is set to be activated from the DL next week, and Clay Buchholz is still “kind of sore” but aiming for a mid-August return at the latest. Felix Doubrant, a relatively low-upside left-hander in AAA, could be called up if Kyle Weiland continues to flounder (although he fared decently in Baltimore on June 19, yielding just three runs in six innings). Heath Bell, Mike Adams, Kerry Wood, and Tyler Clippard lead the list of righties available from out of the bullpen. With the trade market so saturated with pitchers like these, there are bound to be a couple great bargains come July 31.

But offense ought to be the main issue for Epstein. J.D. Drew has thus far mustered up the worst season of his unmemorable Red Sox career, playing to a .223/.321/.309 slash line. Josh Reddick, his youthful replacement, has proved he’s more than a fourth outfielder by clubbing four home runs with a .367 in 28 games. Epstein might be looking for someone more experienced, though, and instead dangle Reddick as trade bait. Luckily for the Sox, a huge number of right-handed right fielders are available. Carlos Beltran, Josh Willingham, Ryan Ludwick, Melky Cabrera, Jeff Francoeur, and Hunter Pence are being peddled by their respective clubs, each with a similar skill sets but alarmingly different price tag.

The Astros are asking almost as much for Pence as they are for Rodriguez, which makes sense, since he’s not only the face of the franchise but also in the middle of a fantastic year. A good fielder, with a great arm, the only flaw in Pence’s game is his lack of plate discipline, evidenced by his career 6.7 BB%. Beltran is the next best hitter, but with the Mets willing to eat his remaining $6 million salary, they think they deserve a top-notch prospect in return for the 35-year-old. If it’s not trashed quickly, this delusional idea might cost the Mets a chance to receive anything more than salary relief for the All-Star. Oakland’s Josh Willingham, a target of Epstein last offseason, remains the best option for Boston. With power and high on-base skills, it’s no wonder A’s GM Billy Beane was so intent on acquiring the 32-year-old from the Nationals. Now out of contention, the A’s are cutting payroll, and Willingham’s $6 million salary will be the first to go. His defense is suspect, but his ability to drive the ball out of the park is undeniable and Epstein would be stupid to pass up the opportunity to trade for him.

Jose Reyes, however, should be their main goal. Mets GM Sandy Alderson has told the press that Reyes is staying in New York, but because he’s a free agent at the end of the season, it won’t be for that long. New York’s financial trouble is well-documented, and it’s obvious that they can’t afford an extension that could total over $140 million, so why keep him? To appease the fans for a couple months? To receive the two draft picks when he signs elsewhere? Obviously out of the pennant race, Reyes provides the most value to the Mets as a trade chip. Shortstop is such a thin position in the Majors that nearly half of the competing teams would be interested. An offer of Iglesias and Ranaudo would hard to decline. Unloading the farm system for a rental player is a controversial move that would have analysts in a frenzy but fans in a state of excitement. Whether Boston would re-sign Reyes in the winter is another question, but having him for the last two months of the season is just the boost that they’d need to become the best team in baseball. Iglesias might turn into the next Wizard of Oz, and Ranaudo could end up pitching like Roy Halladay for 20 years, but it would all be worth it if the Sox won the World Series in 2011.