Bikers have always doped, and they always will. Is that so bad? 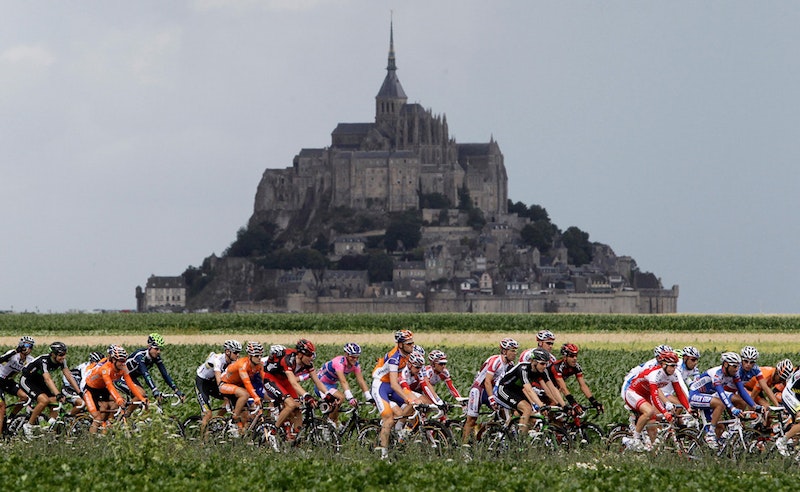 From his bag he takes a phial. "That, that's cocaine for our eyes and chloroform for our gums."

"Here," said Ville, tipping out the contents of his bag, "horse liniment to keep my knees warm. And pills? You want to see the pills?" They got out three boxes apiece.

"In short," said Francis, "we run on dynamite.'

Henri takes up the story. "Have you ever seen the baths at the finish? It's worth buying a ticket. You go in plastered with mud and you come out as white as a sheet. We're drained all the time by diarrhea. Have a look at the water. We can't sleep at night. We're twitching as if we've got St Vitus's Dance. You see my shoelaces? They're leather, as hard as nails, but they're always breaking. So imagine what happens to our skin. And our toenails. I've lost six. They fall off a bit at a time all through the stage. They wouldn't treat mules the way we're treated. We're not weaklings, but my God, they treat us so brutally. And if I so much as stick a newspaper under my jersey at the start, they check to see it's still there at the finish. One day they'll start putting lumps of lead in our pocket because God made men too light.”

Londres reported this conversation in a 1924 piece in Le Petit Parisien titled “Forçats de la route.” Drugs and blood have always haunted the Tour de France. Suffering is part of the spectacle, and Pélissier’s allusion to the Stations of the Cross was apt – we watch the Tour to see athletes excel, but also to see them push themselves past the ordinary bounds of human endurance and into a redemptive agony which glows with the numinous light of religion.

On Sunday the 24th the current pro peloton’s agony ended when the Australian rider Cadel Evans won the 2011 edition of the Tour. The fey Luxembourgers Andy and Frank Schleck joined him on the podium. Behind them, off the stage, was the previous tour’s winner Alberto Contador, who came in fifth under a cloud of suspicion caused by a positive test for Clenbuterol in last year’s tour. He blamed the results on steak of an uncertain origin. In a press conference he described suffering of a different sort:

Throughout my life I’ve undergone more than 500 controls, many of them by surprise, at home, during family meals, birthdays… I’ve had to leave in the middle of movies, I’ve had to leave my friends in restaurants, but it was all because I believed in the anti-doping system. Not anymore. I do not believe in the system now.

I know my responsibility, I know that I’m a point of reference for a lot of people, and I know what I expose myself to, that’s why I’ve never doped. I can say this loud and clear, with my head held high. I consider myself an example of what it is to be clean, and so I find it hard to watch the way I’m slandered every day, the way terrible things are said about me, when the only mistake I made was to eat meat without stopping to analyze it first to see if it had Clenbuterol in it. Every time I go to a restaurant, will I have to take a piece of meat with me in order to check for Clenbuterol?

The cycling governing board will turn in a decision on Contador in September; if they find that he doped he could lose the 2010 tour and the 2011 Giro D’Italia retroactively. In the Alps at the end of this year’s tour Contador rode magnificently, but on the whole his performance was tentative, and he suffered persistent bad luck. The fans booed Contador at the opening ceremony in early July and he suffered in most of the many, many crashes in the early stages. The sports channel Versus has repeatedly aired footage of the tiny Spaniard chucking his damaged carbon superbike into a ditch in disgust after one of his accidents. The Contador of last year was a swaggering rogue; this year he seemed sad and subdued.

Seven-time winner Lance Armstrong, who rode indifferently in the 2010 tour, has been almost totally absent from TV coverage of the tour this year. His former colleagues Floyd Landis and Tyler Hamilton have publicly stated that Armstrong headed an enormous doping operation, and the seven-time winner of the Tour de France may be bound for the greatest race of all, federal prison. Lance’s record doesn’t clearly demonstrate doping, but it’s certainly not clean – there are mysterious donations to the International Cycling Union, ambiguously positive tests for EPO, and a positive test for steroids that he has explained away by claiming he had been treated with an ointment for saddle sores. Pro cycling famously went through a doping crisis in the 1990s; recently the pro peloton has been celebrating a clean, earnest new era, a return to the fair sport of the race before Lance. But doping, like a bad smell, lingers.

The thing is, cycling has always been dirty. In the second Tour ever, in 1904, fans of André Fauré attacked his opponents with clubs; masked assailants attempted to run down Maurice Garin and Lucien Pothier; one rider drank poison lemonade, and several competitors finished stages via car or train. In 1924 Pélissier and Ville were rubbing chloroform on their gums and blowing lines off their handlebars (they later claimed to have exaggerated for Londres).

The list goes on: in 1955 Jean Malléjac collapsed in a drug-fueled fit on Mount Ventoux. In 1965 the heroic French cyclist Jacques Anquetil admitted on national television that he doped; French president Charles de Gaulle responded pragmatically: “Doping? What doping? Did he or did he not make them play the Marseillaise abroad?” Two years later British cyclist Tom Simpson died on Mount Ventoux, the same climb that felled Malléjac.

Things kept getting worse. In 2003 and 2004 eight pro riders died of heart attacks, many during the off-season. The oldest was 35. Italian cyclist Marco Pantani’s death from a cocaine overdose in 2004 served as a sad capstone to an ugly era.

But world-class stage racing is an ugly thing by nature, and it’s not clear if a totally clean tour would be entertaining or possible – could any athlete perform well or even adequately over 21 grueling stages without a little chemical assistance? Is resistance to doping, at least in its non-fatal forms, a quaint, outmoded traditionalism, like the ban on derailleurs before 1937? More importantly, who do doping strictures protect, the riders, or the race organizers and sponsors? And what is the moral content of the doping debate – are dopers cheating, or are they just making the unbearable bearable?

I may be in a minority here, but on a personal level I find the whole doping debate irrelevant. I’m simply not interested in whether a rider dopes or not. In fact I think we owe the riders their dope. Seeing men push themselves past the human boundaries of endurance is part of the magic of the tour; when I watch Andy Schleck and Alberto Contador duel on an alpine pass that I couldn’t climb on foot I’m not worried about how much blood they have or whether they took an illicit hit from an asthma inhaler, I’m marveling at their endurance and wincing in sympathy at the looks of pain on their faces.

An editorial in today’s New York Times puts a depressing new spin on the issue. In the piece, exercise physiologists Ross Tucker and Jonathan Dugas explain that modern sports medicine can track the predictable behavior of red blood cells, which means that they can reliably detect the use of EPO (which generates extra blood) or blood-packing, in which the rider receives a transfusion of his own blood. This seems only slightly sinister, but they go on:

“In the same way that a motor vehicle requires certain components to travel at 200 m.p.h. — a huge engine, fuel and aerodynamics — a cyclist requires certain physiological characteristics to produce the power output necessary to win the Tour de France. Those characteristics, which include a high maximal capacity to use oxygen and efficiency of converting metabolic energy into power, are identifiable and measurable.

It is possible to use these physiological characteristics to estimate the maximal sustainable power output for a cyclist.”

Tucker and Dugas explain that the profiles provided by these measurements can prove the difference between an heroic performance and a feat of drug-fueled transhumanism. I find this horrifying, and I also think it misses the point of pro cycling. If Tucker and Dugas can determine scientifically how good a rider is without actually seeing him ride then why don’t they just line the cyclists up according to lung capacity and hand out prizes on the first day? The riders could wander gently amongst the drunken fans, handing out flowers and candy, and then go home. They wouldn’t even need bikes.

The whole exercise of doping control, particularly in its more baroque sports-medicine forms, seems like an embarrassing waste of time. It’s depressing, and it suggests an imbecilic naïveté on the part of fans and organizers. Surely we can admire professional athletes without imagining them as supernal beings totally free of human vice. Pélissier’s comparison to Calvary keeps coming back to me: there’s something very Medieval and very Catholic about the tour, in its bloody passion of suffering and transformation. Doping control, it seems to me, seeks primarily to make sure that the suffering is real, that the blood and tears drip from faces strained with authentic agony and lined with authentic hardship, and that the final apotheosis drapes the yellow jersey of victory on a man purified by his ordeal.

Frankly, I don’t care. As far as I’m concerned the riders are a bunch of hard men and impressive cyclists even if they’re wired on cocaine and Adderall, and I find the invasive biophysical doping controls creepy and soulless. I hate to sound like a Libertarian, but maybe a rational consumer model of doping makes the most sense: let the riders choose if they want to dope, and let the organization, the sponsors, and the fans mind their own business.