The Mild Contentment of Watching the Last-Place Red Sox

My team’s cooked in ’14; hoping for an O’s/Nats World Series. 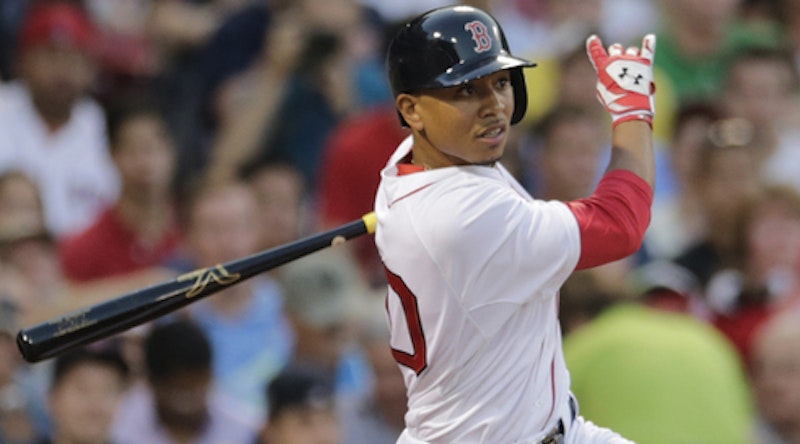 Hyman Roth and I have a common pastime: we both like to watch baseball games in the afternoon. Especially on Sundays. As the MLB season winds down, and the Red Sox, banished to the A.L. East’s cellar, are auditioning players for 2015, I find an odd contentment in tuning into Boston’s sports channel NESN and listening to Jerry Remy and Don Orsillo crack jokes that have nothing at all to do with baseball. Even Don’s shilling for sponsor Joseph Abboud can be spun into play-by-play silver. Don’t get me wrong: nothing compares to the Sox fighting for a playoff berth, but that hope was dashed back in June, when it was clear that GM Ben Cherington hadn’t adequately stocked his roster for a run at back-to-back World Series titles. (Just floating that very idea might occasion my dad’s resurrection, since he didn’t live long enough to witness the ’04 championship.)

So there’s no pressure, no exhaling every time an opposing team leaves the sacks full, no swearing when David Ortiz just can’t deliver another walk-off hit. Sunday’s game against the mired-in-mediocrity Blue Jays was typical: Sox starter Rubby De La Rosa was undone in the 5th by a Jose Bautista 3-run homer, and hit the showers. I fear that the young man’s vast potential won’t reach fruition; maybe he’ll be in the bullpen next year. The Sox lost 3-1, but it was exciting watching Mookie Betts continue his embryonic quest for the team’s new Face of the Franchise, and reassuring that shortstop Xander Bogaerts has started to actually get a few hits. I think Mr. X will have monster season in 2015. My son Booker has little patience these days with this year’s edition of the Sox: he’s fully invested in the next several years and the off-season. But he’s 20 and would rather read an Updike novel than see Will Middlebrooks strike out on three straight pitches. (When Middlebrooks is dispatched to another team, he may knock 25 out of the park, but it ain’t happening in Boston.)

Since I’m a one-sport guy, I couldn’t even distract myself with a Twitter feed because it was clogged with football scores, but I did take immense pleasure in seeing the Yankees fall 2-0 to the Royals, further diminishing their slim chances of playing in October, and that the Yankees futility fell on St. Derek Jeter Day was an outstanding touch. When Jeter plays his last game of his career at Fenway Park on Sept. 28, I’ll have to mute the game, for I might yak all over the sunroom listening to respectful applause in the first inning.

Anyway, in a meaningless game the mind wanders. I rummaged through long-ago memories and wondered what Uncle Remus and Br’er Rabbit were up to—that may be considered rather louche, but you can’t blot out the past; it’s a shame that kids today are victims of Uncle Remus’ expungement from our current ahistorical society. I harmonized with Rod Stewart on his—as my son Nick would say—sick vocal on the re-worked version of “Shapes of Things” that appeared on Jeff Beck’s criminally underrated debut ’68 album Truth. I flipped through the latest Spectator that came in the mail, and was ticked off that neither Hugo Rifkind nor Rod Liddle appeared in the issue. And I pondered, but just briefly because of the dire implications, whether the Scots will be daft enough to vote for independence from formerly Great Britain.

You can see that watching meaningless ballgames, despite the enjoyment, scrambles the brain. So, in closing, as soon as the Yankees are safely humiliated (think they’ll regret the cabbage they shelled out for Jacoby Ellsbury?), I’m rooting for a never-before Baltimore/Washington World Series. (I’d prefer that the outlaw Oakland A’s play deep, and maybe square off against the long-shot Pirates in the Series, if only to piss off MLB Commissioner Bud Selig.) It’d be pandemonium here in Baltimore and every Beltway pundit would suddenly become a baseball diehard. That’d be hilarious. And maybe Booker could score seats for us: we both hope, if this pans out, that the Nats sweep the O’s. Adam Jones is great, on and off the field—funnier than Howard Stern in his prime—but Buck Showalter grates on my nerves. There ought to be a grand prize of $10,000 for the first person to insert a toothpick up Buck’s butt.