A Ravens Fan Turns Off

Football’s no longer fun to watch. 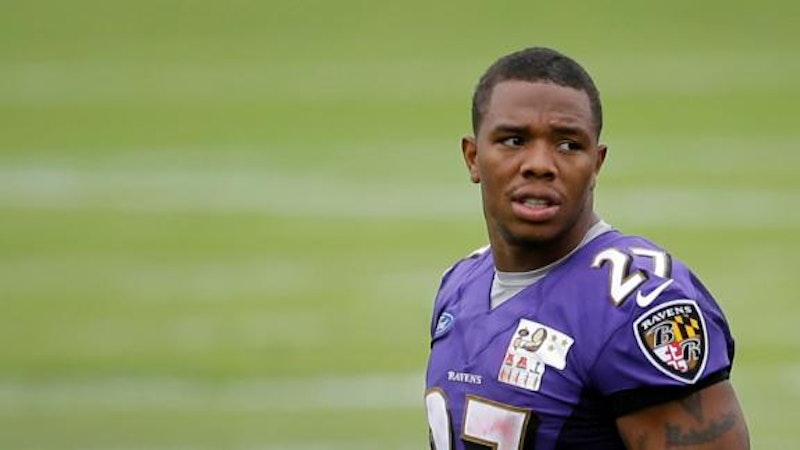 Sports, for most of us, are meant to serve as a diversion, entertainment, a way to blow off steam, or an excuse to crack a beer with a friend. Whether you're playing youth soccer, softball, or fantasy football the purpose is nearly always the same; this stuff is supposed to be fun.

If you've closely followed the NFL's Ray Rice domestic violence saga since February, or casually followed it since Monday when TMZ posted the video of Rice brutally slugging his then-fiancé with a left cross, you'll probably agree that none of this is particularly fun.

I’ve resisted writing about the Rice incident. The biggest reason is that I'm simply uncomfortable with the entire series of events. I'm disgusted that a man that gained a level of respect and admiration in my hometown of Baltimore could turn out to be no man at all. I'm confounded by the notion that any male could strike a woman in such a manner and with such anger. I'm weary of the NFL and the constant flow of arrests among its player ranks for matters big (DUI, manslaughter, domestic violence) and small (weed). I don't like that there are pictures of my beautiful daughter wearing a purple #27 jersey. I'm uncomfortable with the fact that just last week the Ravens unveiled a statue of a player that played a role in another man's death. I don't understand why an organization that has generally acted responsibly over the past decade took six months to cut Rice. I'm exhausted by our cultural obsession with the NFL. I have a big problem spending a large chunk of my weekend/family time watching a game that will at some point lead to my kids openly rooting for someone—or several men—who's been arrested in the last 12 months.

There was a time when none of this would’ve bothered me, simply shrugged it off and checked my fantasy football score. As a 38-year-old father, freelance writer, and business professor my perspective has changed drastically over the past 15 years. I still support Baltimore sports but I'm not the guy checking my critical thinking skills at the door while yelling "Woo Ravens Woo!"

The NFL and its arrogant commissioner are feeling the heat from media and fans for the apparent cover up of the elevator video that TMZ unearthed. Roger Goodell is either flat out lying when he says he never saw the video that was made public on Monday or he's playing a carefully crafted game of semantics. I've been critical of Goodell for years, to the point that my interest in the league as a whole has waned. I watched about 10 minutes of football last weekend and didn't miss a thing. Anyone who has read League of Denial knows that the easiest way to tell if Goodell is lying is to see if his lips are moving. You can rest assured that the league's marketing people are frantically trying to create a story to churn the Rice-filled headlines. My guess is that Jerry Jones will do the commissioner a solid and activate Michael Sam from the practice squad any day now. The Rice debacle has gone from a public relations nightmare to an all-out assault on Goodell's job security over the past few days, and it still isn't the biggest cover-up that he's helped to orchestrate.

The biggest surprise is the complete incompetence exhibited by the Baltimore Ravens' front office. The Ravens have spent the better part of the past 15 years as one of the league's model franchises. The team has had stability in ownership with Steve Bisciotti, the front office with Ozzie Newsome, and has employed just two head coaches since 1999. The Ravens' structure has yielded tremendous on-field success. Now it seems as though that success also yielded arrogance and incompetence on a stunning level.

The Ravens undoubtedly had access to, or knowledge of, the contents of the TMZ video far in advance of Monday. The team, like the league office, is either lying or grossly incompetent. When a group of people with a reputation for making good decisions suddenly seem to have made a series of very bad decisions it's a pretty good chance they're lying about something. The NFL is a $12 billion industry with its own in-house police/intelligence unit. If they wanted to get the video they would have, and very likely did. The team clearly acted in concert with the league with Bisciotti taking cues from Goodell. Following Monday's TMZ revelation the Ravens released Rice, about six months too late, and then sent out football coach John Harbaugh to address the media and face the pitchforks. Bisciotti was nowhere to be found and rather than face the scrutiny head on, and risk lying on camera, he instead released a letter on the team's website.

Oh yeah, you can also turn in your Ray Rice jersey for a new jersey at the team store. Sure, seven months of bungling ineptitude while harboring a wife-beater can be erased by a shiny new jersey. The biggest problem with choosing a new player jersey is that there's a pretty good chance that the guy you choose will be arrested sometime in the not too distant future.

And that's today's NFL. My diminishing NFL viewing habits aren't an act of protest but apathy. I thought this was supposed to be fun.