Stats, trades, prospects and the DL. 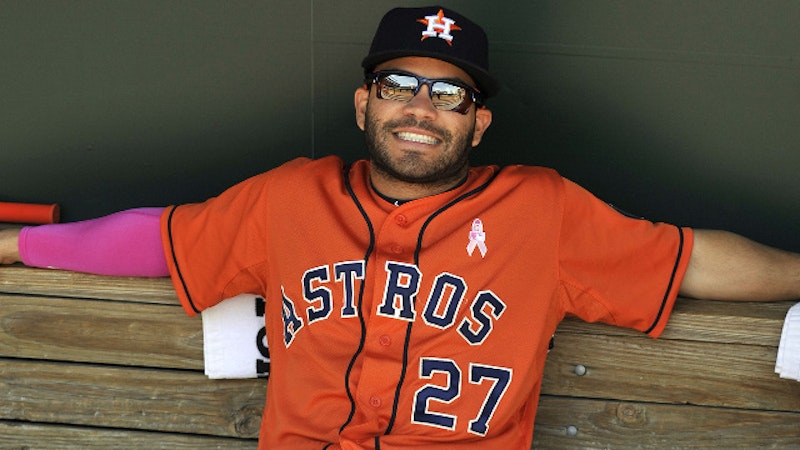 Houston Astros: Will Astros dynamo Jose Altuve become the most popular player in baseball when he signs his next free agent contract with a big market team? Some credit to Baseball Prospectus’ writer and scout Jason Parks. Parks was highlighting Altuve back in 2010, when the young Venezuelan was crushing liners in high-A ball.

Chris Carter's power would be useful to the Oakland Athletics around now, wouldn't it? Carter's home run surge has forced the Astros to reconsider his value going forward. Instead, the A's just traded for 39-year-old Adam Dunn, who is within a few months of retirement after a long career of doing three things at the plate: walking, striking out, and hitting homers.

The Astros’ front office has been praised for its sabermetrically-slanted attitude toward player development and its unconventional outlook. They were smart to sign Altuve to a long-term extension in July of last year. While Houston is on the right path, their negotiation with top overall pick Brady Aiken was heavily criticized. Aiken ultimately went unsigned after elbow concerns were brought to light. By firing manager Bo Porter with one month left in the season, the Astros haven’t done themselves any favors with future potential managers. Will the Astros become the first team to hire a non-baseball-lifer as their manager? A former hedge fund guy?

AL East: It's a shame nobody noticed Derek Jeter is retiring.

The Orioles have gradually improved over the course of each month: April 12-12; May 15-15; June 16-12; July 18-8; August 19-9. How much of Baltimore's success is due to injuries and trades that weakened their AL East brethren? A good chunk. Consider that the Rays and Yankees lost starting pitching early and the Red Sox traded their entire rotation except for Clay Buchholz in July. As the AL East sank, the Orioles have floated to the top.

Signs of Hope: Red Sox prospect Mookie Betts is heating up. Betts, who set the minor leagues on fire at every stop this spring, has been given regular at-bats recently and has now found his stride at the big league level, going 14-for-39 (.359), with three doubles, three homers, three stolen bases, and six walks with only five strikeouts over his last 10 games (through 9/2).

One Red Sox fan’s early vote for next year’s outfield alignment: Cespedes in left, Betts in center, and Castillo in right. Jackie Bradley Jr. as defensive replacement and pinch runner.

AL Central: Keep the magic going, Kansas City. Royals fans deserve a division championship after all they’ve suffered through. The Royals currently hold a 1.5 game lead over Detroit, with six games remaining between the two teams.

Greg Holland is the most dominant reliever that nobody ever talks about. In 2013, Holland struck out 103 batters in 67 innings. This year, he’s continued the flame-throwing, striking out 78 in 55 IP.

Remember when the Twins signed Kendrys Morales to “bolster” their lineup in July in hopes of making a possible run at the wild card? They’ve floundered in the second half and will likely finish with a win total in the low-70s. Nice if you’re describing the temperature. Miguel Sano and Byron Buxton can’t get healthy soon enough.

AL West: Can you name the five starting pitchers in the Mariners rotation? After Felix Hernandez, probably not. The others: Hisashi Iwakuma, who is quietly having another excellent season, elder statesman Chris Young, rookie James Paxton (eight very good starts so far), and an under-the-radar Cuban pitcher named after a sports bureau (Roenis Elias). The Mariners MLB-leading team ERA is 3.06.

Can you name the five starting pitchers in the Angels rotation? Hints: After Jered Weaver (who has been mediocre this season with diminished velocity), a veteran with initials for a first name, a shoemaker, a southpaw named Hector, and a journeyman fill-in-the-blank. Losing new-found ace Garrett Richards to a knee injury seems like a brutal blow to the Angels post-season hopes.