Pick Me Out a Winner, Bobby

A summer marathon of baseball movies is complete. 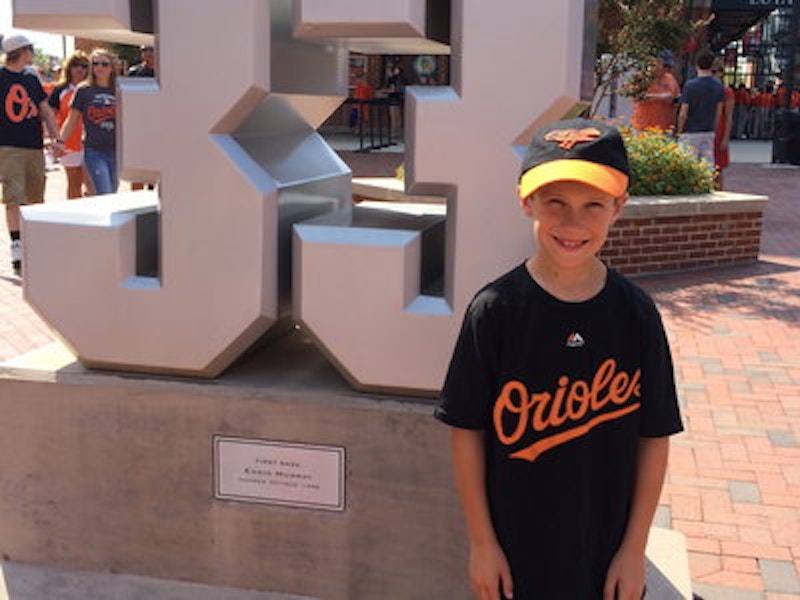 My little boy is nine years old today. This amazes me, because only yesterday Bobby was three, holding my hand naturally/often versus awkwardly/only when crossing busy roads.

Not long after his team’s crushing defeat in the little league playoffs, I read a great article by Booker Smith called “Why I’m a Baseball Fan.” In it, he describes growing up around the sport both on the field and the big screen. He mentioned a movie called Moneyball; I’d never seen it. I asked my son if he’d like to watch it with me. He would, he said, as long as there wasn’t an Orioles game on or it wasn’t a nice day outside for throwing the baseball around with his dad. Fair enough. He checked out baseball fact books and biographies of famous players from the library for his summer reading.

We watched Moneyball and both liked it. Around the same time he’d picked up Field of Dreams at the library, so we watched that. We talked about the difference between baseball movies about things that really happened versus things that were just made up. Field of Dreams wasn’t a true story, obviously, but I told him the Chicago White Sox really did try to throw the World Series in 1919. We looked up the Black Sox scandal and ended up watching the movie Eight Men Out, a great film.

So through this trio of classic baseball movies, a marathon was born. We searched lists of “Top Ten Baseball Movies,” and Bobby picked out a dozen we wanted to see. Making our way through The Bad News Bears (unbelievable how much racism was acceptable in a 1976 movie script), A League of Their Own (“that’s why you told us there’s no crying in baseball one time at the game, isn’t it Mom?”), Major League (ignored the too-much-cussing for an eight-year-old), 42, The Natural, The Rookie, The Babe, Bull Durham, The Perfect Game.

We had a small setback on the movie The Sandlot, which I’d never seen, though I knew from pop culture that the famous quote “You’re killin’ me, Smalls” came from the film. We'd watched all the baseball movies either on Netflix or Amazon Prime and after The Sandlot was over, I thought, this movie was massively lame and I didn’t hear that quote. I Googled, and was horrified to discover that we’d accidentally watched the ghastly 2007 sequel starring Luke Perry called The Sandlot: Heading Home. Back to the drawing board to see the correct 1993 film.

Alas, the original Sandlot was not available for streaming, so we had to order a DVD (under $5) and ditto one for Bull Durham.

I noticed a few common themes among the movies. Obviously the David and Goliath thing is huge, and most of the movies consist of a big dramatic baseball game at the end. Only in The Bad News Bears are the filmmakers brave enough to end the movie without a win. For whatever reason, there is really bad music in almost all the movies (The Sandlot was an exception, and the movie was our favorite of the fictional ones). As themes, nostalgia and romance prevail.

Of everything we watched, Moneyball was a close second but Bobby reported Eight Men Out was his favorite because “It told a true story about how it wasn’t fair that Shoeless Joe Jackson and the other guy had to leave baseball when they didn’t even cheat.”

My favorite, in spite of myself and notwithstanding the smolder of Brad Pitt in Moneyball, was The Perfect Game—it deals with race (Texas doesn’t take too kindly to getting beaten by the Mexican “wetback” little league team), tells a great true story and embodies the underdog spirit and emotion of baseball in a non-cheesy way.

I liked the true stories, and so did Bobby. The Natural is lovely but hitting the cover off the baseball? We loved learning more about Babe Ruth, even as played by John Goodman—Bobby wants to take out a book about him from the library. Moneyball, The Rookie, and A League of Their Own are fantastic for the real historical stories they tell about the game.

It’s been a summer of baseball. Last weekend Bobby got to see his heroes the Baltimore Orioles play, from fantastic seats (thanks to his grandparents) on the first base line. He swore his favorite player Adam Jones was trying to toss the ball to him after catching a pop-up (“it just curved a little bit”). Seeing J.J. Hardy rock a grand slam is something he will never forget. I hope he remembers our summer of baseball movies, too.

He tells me after the game that it's Hardy's perfectly level swing that's how he hit that grand slam home run, and that he's going to swing exactly like that this weekend in his first fall ball game.