The Legend of Dr. Z

Age and infirmity have forced legendary sports columnist Paul Zimmerman to stop writing, but we shouldn’t stop reading him. 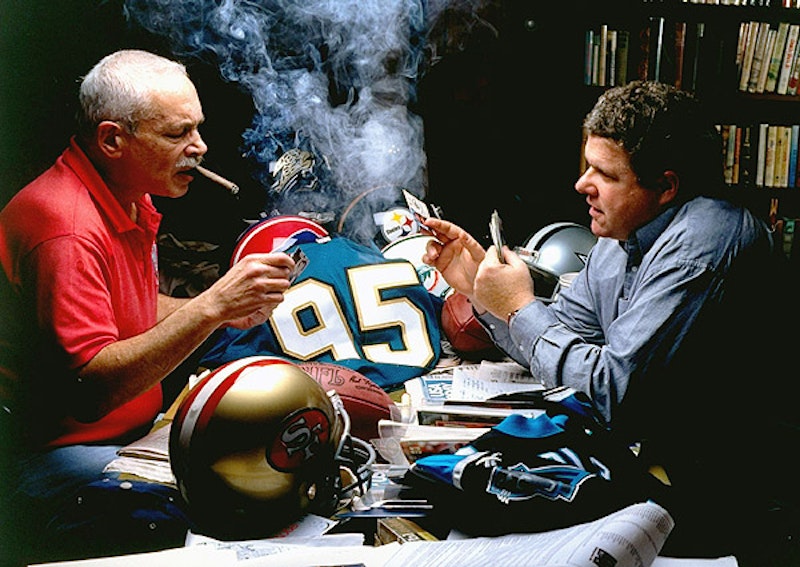 Ah, Peter King. The man whose cherub-chubby face always pops up when I visit si.com, urging me to participate in his Fantasy Football Challenge™. Illustrious graduate of the E.W. Scripps School of Journalism. Given to sporadically entertaining witticisms, detailed discussions of food at various NFL training camps, and altogether too much love for the Steelers and retired quarterback Brett Favre. But how much does he know about football? About as much as a lifelong non-player like me, I'd wager, and that's simply not enough for a person with his sort of notoriety.

King's omnipresence makes the absence of former Sports Illustrated head football writer Paul Zimmerman, who suffered a debilitating stroke in 2008, even more conspicuous. Here was an ex-player—at Stanford, Columbia, and in various semi-pro leagues—who never talked out of his ass. And along with Hunter Thompson, he was one of the first writers that I read who had a distinctive style. And like Thompson, Red Smith, Jimmy Cannon, and others, Zimmerman's legacy has suffered somewhat because he didn't write many full-length books.

But the books that Zimmerman did write were fantastic. Both his 1970 classic The Thinking Man's Guide to Pro Football and its 1984 follow-up The New Thinking Man's Guide to Pro Football capture the NFL at important moments in its evolution: the former when the league was entering its head-slapping, offense-depressing silver age and the latter just before offensive systems derived from Don Coryell's and Bill Walsh's West Coast pass-happy approaches became the sine qua non of championship football.

Best of all is The Last Season of Weeb Ewbank, a month-by-month chronicle of the Jets' 1973 season interspersed with biographical information about that legendary coach. Ewbank, the first and only man to win championships in both the NFL and the AFL, is largely a forgotten man, perhaps because his understated, thoroughly Midwestern, and at times inscrutable style of management wasn't as attention grabbing as Vince Lombardi's sturm und drang approach.

But Zimmerman's book, itself an out-of-print relic, redeems Ewbank and all of the tired veterans (such as overweight former MVP Jim Nance, who was backing up mohawked Kansas University product John Riggins that year) who carried him to the finish line. It's a fast and gripping read, even if "Broadway" Joe Namath, who bore an irrational grudge against Zimmerman until the late-1990s, is largely absent from its pages.

Will Dr. Z ever recover from partial paralysis and return to writing? It's high unlikely, and, even if he did, there wouldn't be much left for him to say. He wasted what literary afflatus he had on a trashy pastime that he loved very much, and, as with the similarly brilliant and similarly disorganized collection of materials produced by record critic nonpareil Mark Prindle, no one will ever bother to sort out what’s been left behind. What is it that Ernest Hemingway was alleged to have said about Jimmy Cannon? "He always wrote to end writing," or something like that. It fits here, too.