The Unsung Heroes of the Winter Olympics: Mixed Doubles Curlers

This is an endurance test of sorts, and communication is key. 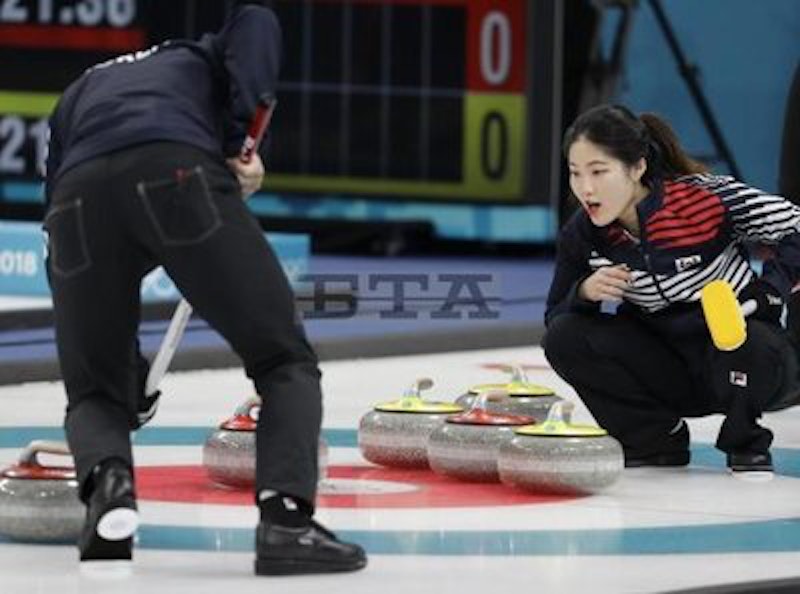 The Winter Olympics don’t hold much interest for me. Despite growing up around Boston, I don’t remember skiing or skating. I loved basketball and played it from June through the fall and winter by the time I was about 12. I’m pretty sure we had one pair of skis in the basement and that my Mom had tried cross-country skiing, which is just walking along the snow and ice in your skis. Is there any more grueling thought than walking miles on a flat, snow-covered road in uncomfortable boots attached to long slippery skis? I’d only do it if a feast awaited me on the other side of the flat, windswept journey. A Thanksgiving spread. Or perhaps if it was my only way home on a frost-bitten night. Otherwise, it would seem to be an excellent form of torture.

If you haven’t watched curling before, you’re not alone. It’s a combination of ice stretching and sweeping. The curler who releases the stone crouches very low to the ice with one arm extended on the handle of the stone and glides to the release line. It’s a delicate act, the letting go of the stone. The release has to be done with a slight spin, as the stone needs rotation on the ice in order to curve at the end of its ride along the ice. The sweeper walks with the stone, occasionally making a furious sweeping motion with an ice brush, hoping to coax the stone toward the center of the target. The trick: there are other stones clogging up the target, so knocking them around is key. The sport is all about clearing impediments. In that way, it’s like life. Simply navigating obstacles and ending up close to home.

Mixed Doubles Curling: Korea vs. Finland: On the Opening Night of the Winter Games, Jang Hyeji and Lee Kijeong of Korea face off against Oona Kauste and Tomi Rantamaeki of Finland. For some reason, the white and blue active wear shirts of Finland say “no name” on the upper chest. Did only the hockey players and ski stars get their names embroidered on the jerseys? What a blow to the ego, before you’ve even competed. “Go win a medal in the Olympics, No Name!”

Many of the older Korean fans are wearing flashing pink ears on their heads. The commentators mention that the ice conditions are very good. A sport that involves rolling a smooth flat stone on a long rectangular stretch of ice with a bull’s eye at the end. One would not want to hear: “The ice is mostly slushy water at this point.”

The Korean duo of Jang (female) and Lee (male) take an impressive 3-0 lead after the first “end.” The scoring involves 10 “ends,” roughly like the nine innings of a baseball game, in that each team gets a turn. Each turn involves the release of their eight stones in each end. I realize that “release” sounds like having kidney stones, but “throw” or “toss” wouldn’t describe the act at all. Jang has a wonderfully powerful call to her teammate, directing him where to sweep. The stone slides gracefully into the center of the “button,” the center of the bulls-eye. The crowd shouts with exhilaration. It strikes me that physics teachers could use curling as an elaborate demonstration of inertia, which complex rations of speed and friction on display. The team with the stone closest to the center of the target wins the end. If a team has more than one stone closer, that team receives extra points. Scoring three points in the first “end” means the Koreans had three stones closer to the center than the Finns.

Lee, Jang’s male partner, has a nervous tic, in which he closes his eyes for a full second after he releases the stone. In contrast, the Finnish duo is much more stoic, keeping an even demeanor. This is an endurance test of sorts, and communication is key. It would seem that patience goes a long way in creating positive chemistry on the curling ice. At the third end, there is a tricky configuration of yellow stones for the Finnish team to discuss. The duo of Oona and Tomi spend a deliberative moment discussing possibilities, pointing with their sweepers at the various ricochet trajectories of the stones. At the end of the turn, a massive ricochet knocks the stones out of the inner circle. From the naked eye, the overhead view shows one red and one yellow stone equidistant from the center. A large man with a bizarre looking device comes out onto the ice. He measures the distance in millimeters from the center of the circle. The Korean crowd shouts again. Another point for the Koreans! 5-0 after three ends. Mercifully, the Finns grab a point on their final stone of the fourth end. They won’t be shut out today. I’ve reached my fill of the curl. I check the results. Turns out this was the first match of the round robin for both teams. Korea won this battle 9-4.

The final standings show the two teams at the bottom of their group of eight. Oona and Tomi have gone on to lose all but one of their seven matches, defeating only the United States. They’ve lost three matches in heartbreaking fashion, 7-6 to the Swiss, 7-5 to “The Olympic Athletes from Russia,” and 7-6 to Norway. Meanwhile, Jang and Lee have also lost a few nail-biters, 8-7 to China, 6-5 to those Athletic Russians, and 6-4 to the Swiss. In the end, the Canadians defeated the Swiss for the Gold Medal in Mixed Doubles Curling.

What can I take away from this brief dip into the frozen world of stones sliding across the ice? The zen-like process of clearing the way for the stone. Of paving a road, a half-second before it is being driven. The set-up and the strategy. The action is as much in the preparation and the vision, as it is in the action itself. Millimeters between first and last. There’s a beauty to that precision. It’s also warmer on this couch in California than on the ice in PyeongChang.