Or, how not to transition a young quarterback. 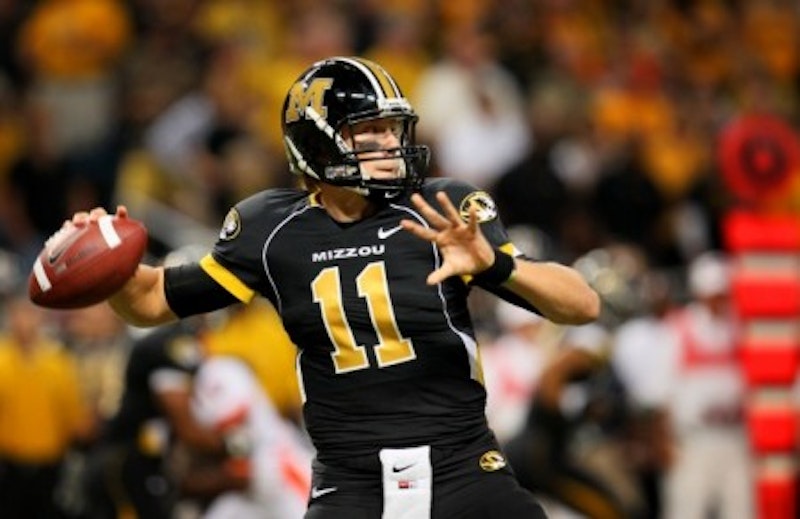 The Jacksonville Jaguars have been the NFL’s model of mediocrity for about a decade. Head coach Jack Del Rio has been in Jacksonville since the start of the 2003 season and has compiled a less than stellar 67-69 record. Given the league’s obsession with parity it’s odd to see a head coach last as long in a job with as little to show for it as Del Rio. He’s kind of like Jeff Fisher “The Next Generation.”  At least Fisher went to a Super Bowl and an AFC Championship game early in his career before essentially punting a decade. Del Rio has posted winning records in just three of his eight full seasons at the helm in Jacksonville. In the ultimate what have you done for me lately league Del Rio hasn’t done much.  Jacksonville last made the playoffs in 2007.

Enter Blaine Gabbert, the flaxen-haired savior from Missouri. Jacksonville chose Gabbert with the 10th overall pick of the 2011 NFL draft. Incumbent David Garrard was still on Jacksonville’s roster and figured to start for most of the 2011 season. Garrard generally performed admirably for the Jags. The roster wasn’t exactly overflowing with offensive talent and Garrard’s receiving options were typically rather limited.

Rather than press forward with the assumed plan of sitting Gabbert for most of the season and letting Garrard play out the last year of his contract Jacksonville released the veteran quarterback just days before the season opener. The party line was that Garrard was erratic in the pre-season and that career backup Luke McCown had beaten him out for the starter’s job. I’m sure it had nothing to do with Garrard’s $8 million salary for 2011.

McCown was predictably awful and benched in week two to make room for Gabbert. Jacksonville seemingly cut their veteran starter and threw an untested rookie into the lineup to save cash. They surely aren’t the first team to take such action but the Jags’ treatment of Gabbert must be questioned. The youngster has struggled mightily. Through his first seven games Gabbert is completing fewer than 46 percent of his passes. He has thrown for just 907 yards in seven games, including back-to-back sub 100-yard performances against Baltimore and Houston.

It’s not all Gabbert’s fault. The Jacksonville offense is devoid of playmakers other than running back Maurice Jones–Drew. The receiving corps is among the NFL’s worst with the diminutive Mike Thomas listed as the team’s de facto #1 receiver. Jason Hill, a washout in San Francisco starts opposite Thomas. Tight End Marcedes Lewis, a Pro Bowl selection in 2010, is legit talent but he has struggled to find a rhythm with the young signal caller. Through eight games Lewis had just 15 catches for 174 yards.

The Jaguars have essentially written a handbook on how not to transition to a young quarterback. While fellow rookies Andy Dalton and CM Newton were given the majority of first team reps in training camp Gabbert was forced to sit behind Garrard. Then he lost another two weeks of prep time while Jacksonville put the ill equipped McCown under center for two weeks. The lack of preparation and reliable weapons has put Gabbert behind the eight ball. Here’s hoping he doesn’t stay there.