The Glory of Boston's Opening Day

Not even cranky Globe columnist Dan Shaughnessy could dampen the mood. 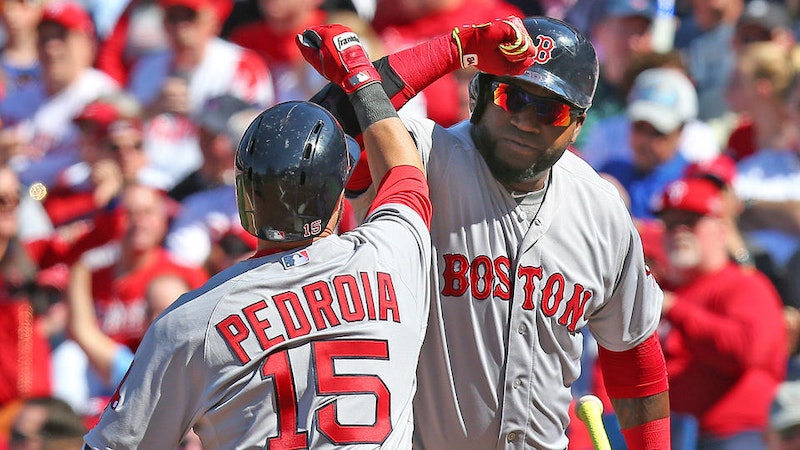 Opening Day is a holiday. More sacred than Easter or Passover or any other spring day for me. This isn’t about the tropes of fresh starts and green grass and the end of winter, though those are important aspects of Opening Day as well. This is about the lovely impossibility of percentages. One divided by 162.

The first regular season game of the longest season in professional sports counts for roughly 0.62 percent of the season. But let’s be honest: All but the most literal-minded, detached fan does not see Opening Day that way. With all the anticipation of Game #1 comes all of the exaggerated impact that Game #1 has. As is the case with the majority of baseball games, strange things happened.

On Monday, 28 of Major League Baseball’s 30 teams opened their seasons; the Cubs and Cardinals debuted on Sunday night. Of those 14 games, four ended in blowouts. Boston (8-0), Colorado (10-0), Kansas City (10-1), and Oakland (8-0) all began their seasons in glorious style, piling up runs as if they will last forever. Never mind that Kansas City and Oakland may not score more than seven runs in a game for the rest of April. For now, their bats are bright-eyed and bountiful, and the lineup takes on a jovial vibe. Coming into Monday, Red Sox and Rockies fans knew high-scoring games were likely occurrences. I suppose it’s ingrained in those that have ever attended a game at Coors Field to expect a steady flow of hits and runs. Red Sox fans have certainly come to expect doubles off the Monster and “crooked numbers” on the scoreboard, but five home runs on Opening Day? Four solo shots off Cole Hamels? This was only the second time in his career he’s allowed four in a game.

Chances are rather slim this Red Sox team will hit over 800 home runs in 2015. But for now, they are indeed on pace. Don’t worry about those cold and rainy nights destined to occur in April and early May. For now, every game will be played in the bright sun of the day, and the fastballs will look more like meatballs to those Red Sox hitters.

By the time Hanley Ramirez approached the plate in Philadelphia with the bases loaded in the top of the ninth inning, he’d already homered once in his Red Sox debut. Boston fans had been treated to a gem by Clay Buchholz (7 IP, 3 H, 0 ER, 1 BB, 9 Ks). Hanley iced the Opening Day cake with a grand slam off the left-field foul pole. Ramirez on the back of the jersey is a familiar sight. Calmly trotting around the bases with that name on the back is also familiar. Let the delirium set in.

Red Sox Nation is swapping news of a healthy Dustin Pedroia (wrist surgery saps power and measurably impacted his 2014 season) going yard twice (both would’ve been Fenway doubles), a Mookie Betts rope into the left-field bleachers (screaming double off the Monster), and Hanley’s two blasts. An 8-0 win will do wonders for a team. Never mind the 0.6 percent factor. There will be no cynical Dan Shaughnessy Boston Globe column about the contract of Hanley now. He’ll probably rip Pablo Sandoval in about two weeks if he isn’t hitting, but nobody will listen anymore. There is no room for cynicism in the clubhouse that’s filled with smiles on Opening Day.

The starting rotation may still lack a true ace, but that can wait. Newly-extended Rick Porcello (four years, $82 million) will be paid like one, and may turn into an ace. If you examine his career trajectory, and consider his lack of infield defense in Detroit, it’s a solid deal. One reason Porcello isn’t treated that way, he’s more Jordan Zimmerman than Max Scherzer. That is, he’s a ground-ball pitcher, more dependent on his infield than others. In the AL East, being a ground-ball pitcher is important. Consider those launching-pad afternoons in Toronto, Baltimore and Yankee Stadium, not to mention the 310-foot Monster, and you get the idea. If Porcello and Wade Miley can keep the ball on the ground, they will do more than survive the AL East. This isn’t to say that the Red Sox won’t make a move for a top-line starter in July or August. With every Justin Masterson start, we’ll likely be holding our breath.

Prospect-focused fans will clamor for Henry Owens and Eduardo Rodriguez to be given a chance in the rotation. Blake Swihart will likely dominate in Pawtucket. The season will tell its story, one game at a time, until we’ve reached the usual markers. All-Star Break. Trade Deadline. September roster expansion.

Ramirez and Pedroia will each hit fewer than 300 home runs. Hamels will see his ERA drop as the weeks tick by. Things even out. They always do in baseball. Except for Jose Bautista, whose career will be studied by baseball scientists for decades. And maybe Corey Kluber, who accidentally found a ridiculous cut-fastball during a minor league rain-delay in 2011.

We’d be remiss if we left out Big Papi, who was headed for platoon village as a 26-year-old in Minnesota before making his way to Fenway. His career has turned out okay. Don’t forget Ramirez has played his career in pitcher’s parks (Miami and Los Angeles). Maybe he’ll hit 50 this year. Maybe the Red Sox will set run-scoring records in our modern pitching-dominant era. We’ll wait until they play Game #2 of 162 to decide on what’s possible.