In Praise of a Defunct Sports Team

The pleasures of box lacrosse. 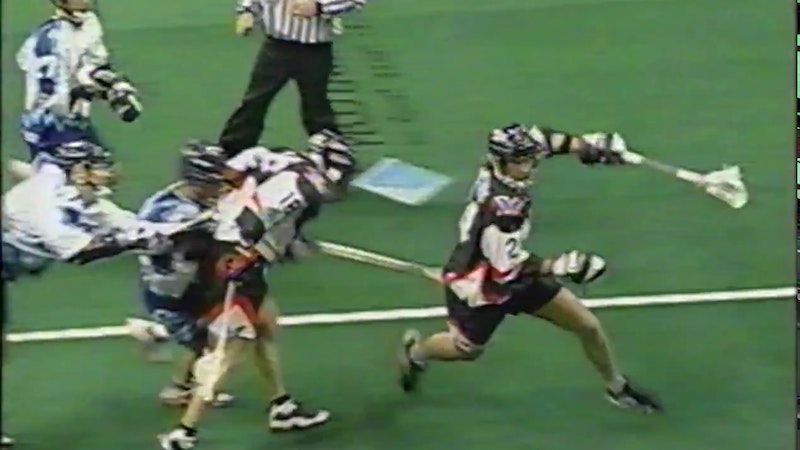 Some people grow up watching storied franchises in historic venues—the New York Yankees at Yankee Stadium or the Boston Celtics at The Garden. Not me. Living in the Adirondacks, with a father who enjoyed niche sports, options were limited. So my family bought season tickets to watch the Albany Attack play in the former Pepsi Arena. We regularly piled into a minivan—driving two and a half hours each way—to see a short-lived box lacrosse team compete in New York's capital.

Box lacrosse is played in converted hockey rinks, and is faster and more physical than field lacrosse. The equipment is different as well. There are no long poles and goalies are outfitted like their hockey counterparts. As someone who played a few years of field lacrosse, I have to say the indoor variation is a lot more fun to watch. Though in this era of growing awareness surrounding brain injuries, I wonder if the athletes face greater risk.

The Albany Attack played just four seasons, from 2000-2003. Over that time, the team posted a record of 33-25, according to JustSportsStats.com. Low attendance resulted in the Attack moving to San Jose, CA, where they rebranded as the Stealth. In 2009, the team relocated to Everett, WA. And in 2014, the Stealth moved to Vancouver, British Columbia. As readers can surmise, there isn't much in the way of stability in the now 32-year-old National Lacrosse League.

Still, I have fond memories of the Albany Attack. It was a raucous time—with rock music blaring throughout play and fights encouraged. Whenever athletes dropped their sticks and started throwing punches, the Pepsi Arena roared. Having watched some recent matches online, while the music remains loud, scuffles are more infrequent. Whether this has been achieved by rules or culture change, it's probably for the best, however much I enjoyed the fights as a teenager.

My mother and sister attended the games, but I primarily remember our trips to New York's capital as bonding experiences with my dad. In high school, he belonged to a Long Island championship squad and was an all-league defenseman. I went to various training camps as a kid, which allowed me to crack a mediocre team's starting lineup. Despite my limited success, lacrosse was something we shared.

Anyway, since the basketball season ended, there's been a New York Knicks-sized hole in my heart. I've looked for secondary clubs in Major League Baseball, the Women's National Basketball Association, and Major League Soccer. But I haven't grown attached to them. While the indoor lacrosse season overlaps with that of the Knicks, meaning I'd still have to find a summer squad, perhaps I can root for another team in the NLL.

Following the New England Black Wolves makes the most sense, as they're based about an hour away from where I live now. But I might wait to see where upcoming expansion clubs will be located. Who knows? Maybe the lacrosse gods will grant the Albany Attack a second lease on life! In the NLL, crazier things have happened.