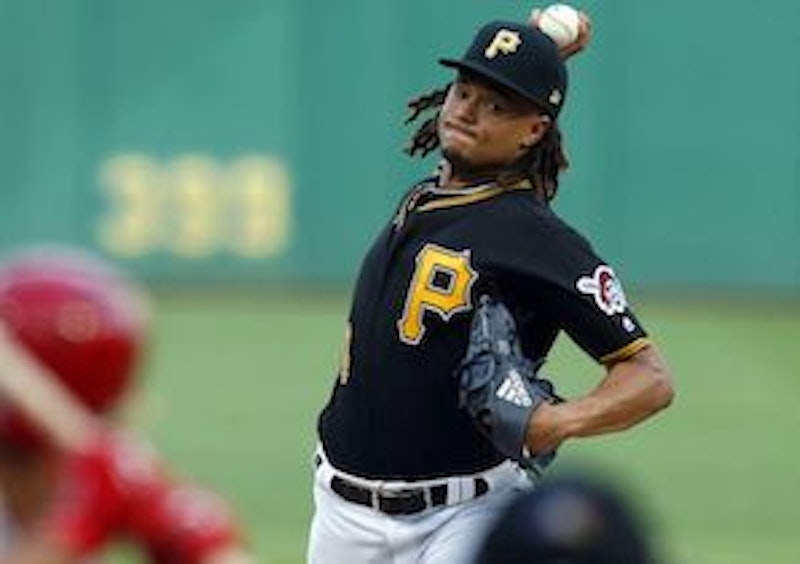 The chuckle came from listening to MLB Network Radio’s call-in show the day after the Pirates acquired pitcher and potential ace Chris Archer from the Tampa Bay Rays Assisted-Living Baseball facility at the trade deadline.

“We usually get Chad Qualls, so this is kind of special,” said a caller from New Jersey who was a Pirates fan. I was about to plow my VW Jetta into a stationary deer standing in the middle of a street in sleepy Gambier, Ohio. I laughed and pounded my steering wheel and the deer kindly moved to the overgrown berm, giving me the fisheye because she was apparently a Brian Meadows fan and we gave up the slugging outfielder as part of the deal for the dreadlocked eccentric hurler from Tampa.

We also gave up a Randy Johnson-esque Wildman pitcher named Tyler Glasnow. The caller (who did not have an Italian nickname, unlike half the callers to WFAN in New York) was correct with his Qualls reference. Pirates fans are not accustomed to acquiring bona fide talent and grabbing headlines in early August when the usual big-name teams pile up big name personnel intending to bully their way to a pennant. SB Nation called the trade “amazing and infuriating at the same time.” Chad Qualls is fun to say but he was hard to watch. Much like another lackluster reliever named Donn Pall, who amazingly got a ring with the 1997 Florida Marlins.

Having purchased game tickets for a mini-family reunion type of deal several weeks prior, I suddenly had seats for Archer’s Friday night debut against the hated St. Louis Cardinals. Lexus Club seats behind the plate among the “Grey Pouponers” as Kirk Gibson used to call them. Suddenly a social experiment was on my hands as I ventured across the Ohio River into Pittsburgh for a baseball weekend with new blood in the clubhouse. There was a buzz in the air, oddly, even as the powerboats raced along the Allegheny River for the annual Three Rivers Regatta. The Bucs were barely in the NL Wild Card race and remain a week’s worth of games behind the seedy Chicago Cubs who are keeping the Brewers at bay atop the division. Talk radio was still buzzing as the front desk guy at the hotel looked at my hat before he asked what drew me to Pittsburgh. What do you think? The Fred Rogers documentary?

As we rolled in, Archer had done everything right upon arriving in his new city. He’s known for his quirky attendance of museums when he’s on the road. Pittsburgh has plenty of those. He said he spilled something on his shirt at the airport so he had to buy a Steelers jersey at a souvenir shop. He’s tuned into social media, of course, though his 29 years bely his youthful appearance. Archer said he was going to warm up to Wiz Khalifa’s “Black and Yellow” song (Khalifa being a Pittsburgh native hip-hop star who righteously wore a “Legalize It” pot t-shirt while throwing out a ceremonial first-pitch last season).

Archer also refused to maintain his usual uniform number 22 out of deference to Pirates legend Andrew McCutchen who wore that number as he stole the hearts of the Steel City. Archer opted for number 24 which carries the oddball historical strata of Barry Bonds/Brian Giles/Pedro Alvarez.

The Archer t-shirts and jerseys were ready for sale by the time his Friday debut rolled around. With the Steelers training camp opened and holding its first night session in Latrobe as Archer took the hill, attendance took a slight hit with 26,733 moving the turnstiles. The kid from Raleigh showed some enthusiasm on the mound but might’ve had some nerves. Matt Carpenter, a Pirates-killer from way back, homered on the fourth pitch of the game. It was an ominous bat crack from the Cards first baseman who can’t throw. He’s been on fire since the All-Star Break and would spend most of the weekend fulfilling his role as destroyer of all things Pittsburgh.

There was fidgeting in the expensive seats as Carpenter crossed home plate and Archer requested a new baseball from catcher Francisco Cervelli. As seen behind the plate, Archer’s slider looks other-worldly and apparently it is from any viewing angle. His fastball is another story, and for some reason, Bucco pitchers are programmed to groove fastballs, even when they’re ahead in the count. The Pirates offense would bail Archer out for a no-decision 7-6 win as manager Clint Hurdle had an early hook to prevent any statistical embarrassments. It was not Hurdle’s best weekend at the helm, as he white-flagged a loss the next night by leaving in a AAA reject in the middle innings despite viable options in the bullpen.

Sunday’s matinee was another tight loss as Carpenter hit another homer and the Cards got fortunate bounces and eked ahead of the Pirates in the desperation gambit that is the NL Wild Card.

Archer escaped key jams with some dramatic strikeouts that bolstered drama. He was noticeably engaged and paying attention, which is more than a Pirates fan can say about several of our laconic athletes. Few are punished for forgetting how many outs there are. I did notice that Archer obsessively discards baseballs he doesn’t like. He must’ve gone through several cases of balls in just the four innings he was out there. For some reason, it reminded me of Joey Fama, one of the Bensonhurst thugs convicted in the Yusuf Hawkins case in 1990. Fama, it came out during the trial, was an obsessive shower taker. It was an odd mental leap to be sitting in delightful seats in a beautiful ballpark in Pittsburgh and connecting our newest “star” to a Bensonhurst kid who made the papers almost 30 years ago. This is what being a Pirates fan does to your brain.

I wanted to ask Kevin McClatchy what he thought of the Archer deal. McClatchy is the former owner of the Pirates. His family owns an extensive newspaper chain. Back in 1995, he kind of saved the team from moving to Tampa by reluctantly engineering the deals to get PNC Park built on the north shore of the Allegheny River as Three Rivers Stadium began to crumble after only three decades of multi-purpose, cookie-cutter service to Steelers and Pirates fans.

I used to publish a Pirates-oriented fanzine called Murtaugh around that time and one of my readers sent me a note describing the “alternative lifestyle” of the Pirates owner. The reader’s wife worked in catering and saw McClatchy with his male companion at several LGBTQ events in the Pittsburgh area. He was “baseball’s first gay owner” as The New York Times’ Frank Bruni would break the story some 16 years after I was given the tip. Outsports.com had him in their dispatches well before Bruni wrote his piece. I just didn’t think his sexual preference was that relevant and as a Brooklyn-based fanzine editor I had no access to McClatchy for any type of verification. I had one opportunity, but it was in the men’s room at Shea Stadium in 1999, and, knowing what I knew, I thought that to be a highly inappropriate venue for any type of “interview.”

I spotted McClatchy last week in the Lexus Club and waved. He waved back. He was with his usual dudes and was enjoying the succulent banquet laid out for Lexus Club guests. I decided to maintain my old habit of “not interviewing” McClatchy and let him eat in peace. When he took his seat, he was planted in the front row behind home plate, his old roost, and was certainly noticed and acknowledged by the franchise he used to own. He was a man of integrity, for a baseball owner. Back at Three Rivers in the late-1990s, a kid way out in the outfield upper deck held a sign asking McClatchy to trade seats with him. Soon enough, the owner was out in the outfield nosebleeds and the bold Bucco fan was sitting in his front row chair, which was a bit of gas back then and would have certainly “gone viral” in today’s shallow online climate.

They never made too many Archer type moves when Kevin owned the team. He didn’t enjoy a single winning season, and the budget/payroll was minuscule and slashed at every turn. The “Freak Show” team of 1997 made some noise into late September, but failed.

As I still suffer from Charlie Morton Syndrome (mediocre pitcher leaves your team to become unlikely superstar elsewhere), I’m hoping the Bucs can build around Archer and maybe assemble a juggernaut rotation. We already have the white Jim Bibby (Joe Musgrove, who came over in the much-maligned Gerrit Cole trade) so there’s hope for some 1979 juju. Oddly enough, the Pirates’ Saturday afternoon alumni autograph guest was Andy Van Slyke, who had several hundred fans waiting in line for his signature outside the ballpark on Saturday an hour before he was scheduled to appear. Saturday night was also his “bobblehead night.” If anyone’s the opposite of Chris Archer, it would be the outfielder from Utica, NY, known for his misplaced candor ripping players such as Robinson Cano and Colby Rasmus.

As the Pirates limped out of Pittsburgh for a challenging West Coast swing, my 13-year-old daughter showed me Archer’s Instagram account. The Bucs were all wearing NBA jerseys for the road trip, and Archer opted for a WNBA kit. He also shot comical close-up video of Musgrove sleeping on the plane before his Monday night start at Coors Field in Denver. Archer’s slated to pitch against the Rockies Wednesday afternoon.

The way I figure, if it’s going to be a bumpy ride for my Buccos the rest of the way, we might as well have Archer hitting the social media mark.