Young Nordic skiers have lessons for us all. 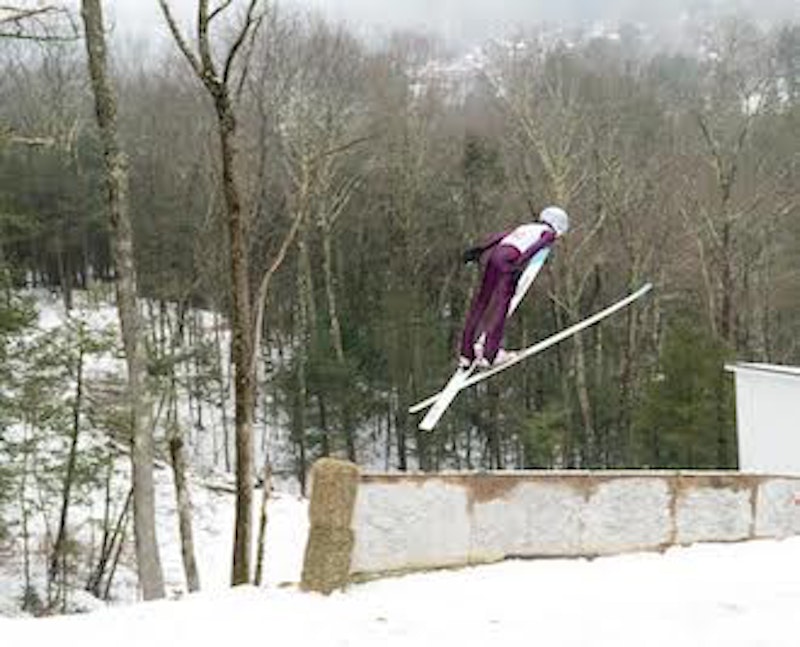 During a winter when baseball’s leadership is considering alarming major rule changes for my sport, it’s fun to plunge oneself into Alpine garb and take in a ski jumping championship in a distant corner of Connecticut. That’s when Dr. Marten’s boots fail to live up to cold-weather survival standards and eventually shorten your outing.

It’s a penance of sorts to subject oneself to the lack of signage in New England hamlets such as Salisbury, Conn., where all drivers are expected to know precise routes to the ski jump area without any visual aids that apparently cost money and therefore are verboten in skinflint New England. Having finally tracked down the location, I was painfully early as my boots would attest later. It was, in typical braggart New England fashion, the 93rd season of ski jumping sponsored by the Salisbury Winter Sports Association. Instead of “George Washington Slept Here” call it Eddie the Eagle slept here, though there is no evidence of the legendary ski jumper from Great Britain having ever stepped foot in the forgotten Northwestern corner of the Constitution/Nutmeg State.

I was impressed by the fact this weekend-long event called “Jumpfest” had as its official program a 48-page newsprint tabloid ginned up by an area newspaper. It was swollen with local advertising and briefly removed my gloomy mood about print journalism suffering the digital “agony of defeat”—the catch phrase from the intro of ABC’s Wild World of Sports. It should be noted that famous line fell on the image of Vinko Bogataj, a Yugoslavian ski jumper bailing horribly on his descent from a ramp in Bavaria that was the money shot of possibly the greatest non-cable sports programming ever produced.

From my front yard I can almost hear the wailing of Catskills ski industry bigwigs who have the Herculean task of dealing with climate change. Hunter Mountain’s ski resort has already had two fatalities this season, and when I walked onto the Salisbury jump site, I noticed two smaller ski jumps next to the big 65-meter ramp called Satre Hill. They’re starting them young. There was kind of an underground/backyard sports vibe to the place as the homemade ramp towered high amongst the treetops with manufactured snow groomed by guys with oversized rakes. Reminded me of the early-1980s in Ohio when kids ordered half-pipe and quarter-pipe blueprints from Thrasher magazine and would construct their own ramps in driveways and cul-de-sacs. When I talked to some of the young ski jumpers at Salisbury, I saw the same confidence in their eyes that I saw in Florida skateboarders later in the 1980s who’d fearlessly drop into drained swimming pools and do outlandish beanplants and ollies and all that as if they were made of rubber.

Caroline Harrison, 15, of Lyme, N.H., was stretching in front of a shed that served as the announcer’s headquarters for the event officially known as the Eastern U.S. Jumping Championships, which will produce a team that will travel to Park City, Utah for the Ski Jumping and Combined Junior Nationals. She had a long, braided pony tail and a sweet countenance as she was interrupted.

“How long have you been jumping?” she’s asked. “Five years,” she says.

“Is it scary?” she’s asked, motioning toward the Salisbury ski jump that looms some 250 feet in the air among the treetops. It’s a white tower amongst the surrounding brown winter landscape. “It’s kind of scary when you look at it,” Caroline says. The program has a brief profile of her that asks, “Why do you ski jump?” And she replied, “To fly!”

And fly she would. I asked her what division she was in for the competition. “The women’s open,” she said. “There are only two of us.”

To open the competition, the DJ announcer dude played the National Anthem, explaining how Saturday’s heavy winds barely allowed for the U.S. flag to be flown at the top of the hill. Hats were painfully removed on Sunday as he selected the incredibly slow Faith Hill version of “The Star-Spangled Banner.”

Having seen how high the ramp was, I was assuming the jumpers would be taken up to the top by a Snow-Cat or some other transportation. No, they must use the stairs. All six million of them.
“It guess it is still kind of intimidating,” Harrison said, eyeing the tower. And this is a girl who has used the famed Lake Placid ramps several times in her career. I left her to continue her stretches and admired her confidence.

I thought of my 14-year-old daughter as it was announced that Caroline would be the first jumper of the day. So, the “women’s open” is two teenagers and they have to go first? Fire up the pressure cooker, why don’t you? I watched Harrison bobbing up the stairs with the other ant-like jumpers with skis propped over their shoulders. In these days of Fitbit you could easily imagine one million calories burned on the ascension of the Salisbury ramp. Having looked into her eyes, I felt a parental heart tug when she was released from the starting bar way up there and was shooting down the ramp with her arms behind her. Jumpers don’t use poles, and that gives them a surfer/skater rebel yell tactic for skiing. Caroline was fine off the ramp and nailed a nice jump marked at 45 meters. Welcome to the metric system, still used in skiing competitions even though the rest of America has failed to adopt it as we were promised in the 1970s. I was so glad Caroline survived the initial run. Oddly, her subsequent jumps would also draw my special attention in a quasi-parental mode.

It was interesting to stand amongst these young ski jumpers before the competition as they all appeared red-cheeked and eager. This was before they donned their padded suits and Daft Punk style helmets, some with cameras affixed on top.

The PA system was playing ironic songs from the announcer guy who kept everyone well informed leading up to the competition. “It’s almost showtime,” he said, giving a minor league baseball feel to the proceedings. He’d play “Kokomo” by the Beach Boys and “Summer Wind” by Frank Sinatra as the 400 fans assembled would huddle around bonfires made up of burning pallets, which, if I remember from my Brooklyn loft days, are not the healthiest things to be burning around homo sapiens.

I’d been hoping for more telltale, zany sports niche bumper stickers on the cars in the makeshift parking lot. There was the usual rutted path and row of Port-a-Johns, a craft beer tent, a tea tent and a pretty decent concessions stand that ran out of bratwurst kind of early in the day. There was a tailgate-style fondue set-up shared by three couples, but it was by no means grand. There were plenty of dogs roaming the grounds, including a photogenic Husky or two. This was a tough, winter-sports crowd with chatter about hikes and snow mobiles and ski runs. These aren’t complainers or allergy sufferers. Everyone’s dressed properly for the conditions. Ears are covered. Feet are insulated. Confidence is high, especially with lots of Red Sox and Patriots gear being worn. I note that much of it is brand new, but who am I to split hairs in this weather, with so many kids risking their lives off a homemade ski ramp in Salisbury, Conn.?

I approached a guy who looked like Jay from Jay and Silent Bob stretching on the deck of the announcer’s shed. “Are you jumping today?” I asked him. “I sure am,” said Cooper Dodds, 28, from Hanover, N.H. He was part Jeff Spiccoli, part Jeff Gordon. “I’m 28, one of the old guys here,” Dodds said. He was among two participants in the “seniors” competition and would dominate the day with his smooth style. I asked him about fear. “I’ve survived a few harsh crashes,” he said. “It goes with the territory.” With a decade of jumping under his belt, Dodds said he still likes the feeling of being in the air. There’s a point when you watch these jumpers exit the lip of the ramp and there’s a soundless void of their peeling through the vapors, leaning forward in a faultless downward glide telling gravity who’s boss. It’s kind of breathtaking.

“When you’re in the air on a good jump it’s an unmatched feeling,” Dodds said with Slatnar skis being waxed on sawhorses behind him. Dodds had won before at Salisbury and was returning after an absence. He had random fans standing on fringes of the landing area where there were dads eating bratwurst and painstakingly trying not to drop kraut on their infant sons in the bjorns looming from their chests.

Cowbells are used as fan approval for ski jumpers, but nothing beats the sound of their skis landing with a distinctive slap on the hard-packed snow. It echoes ever so slightly through the surrounding pines and for some it’s reminiscent of the goth stripper at Billy’s Topless bar in Manhattan who used to slap her own bottom with a similar sound. It was a glorious Victorian gesture that somehow managed to rise above the high volume of the Alice In Chains song blaring away.

Ski jumpers, especially dudes like Dodds with flowing locks, employ the coolest ending in all of sports. They’ve nailed a jump, measured their landing perfectly and put on the brakes with a textbook snowplow stop in front of the adoring crowd at the bottom of the hill. It’s a combination of James Bond and Kelly Slater with their now-relaxed limbs having cheated yet another near-death experience.

The Grim Reaper was hiding from the sun during this Salisbury afternoon. Somewhere nearby there was an alpaca farm and a stone structure library resembling a Norman church. Everything in Connecticut seems built with solid materials mined from the earth. Milling around the craft beer tent were Neil Young types and there were a few William S. Burroughs types wearing the bibbed garb of quasi-officials. There were many families in attendance. The lone ambulance on site was underused, though on the practice runs an 11-year-old ironically named Paine wiped out on his landing and withdrew from further competition. For the most part, the jumpers at Salisbury were extremely competent and not very accident-prone.

Unfortunately for Caroline Harrison, my adopted daughter of ski jumping, there’s a rival named Elise Loescher who keeps showing up and beating her by 10 meters or so. After they finish, the two female jumpers scrambled red-cheeked and laughing into the announcer’s shed at Salisbury—no harm no foul. We can learn from these girls. Putting ski jumping as an extra-curricular activity on you resume just might help when it comes to the confidence question. If you ask me, it sure beats sitting at home and staring into space with a digital device in hand.

As my feet went numb, I stared through the blur of fire fumes spitting from the pallets. In the background was the grand, white swoop of the hill and for a second or two the pallet flames became a poor man’s Olympic cauldron. My first spectator experience at a ski event was indeed uplifting. Standing amongst the other ski fans I noticed everyone was glancing skyward to see the action. This naturally elevates the ski jumpers to celestial status.

But for a winter afternoon in the Litchfield Hills, you looked up at young people who could fly.