Jimmy Garoppolo gets the wrong kind of publicity with Beverly Hills date. 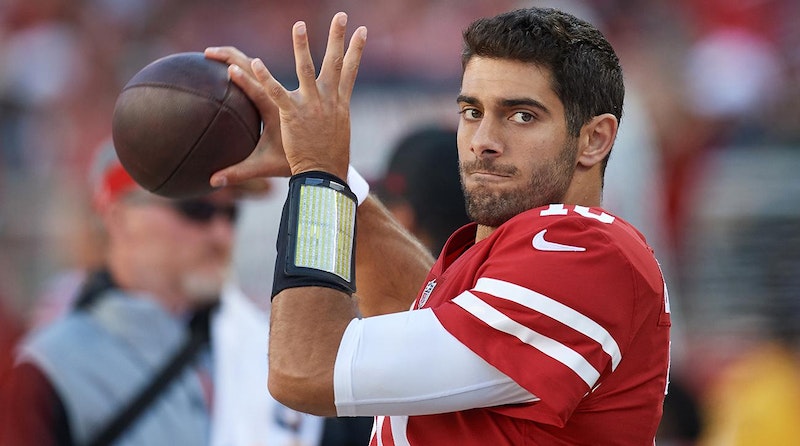 The San Francisco 49ers’ new 26-year-old quarterback sensation, Jimmy Garoppolo, has gone undefeated at 5-0, and now he's scoring in a flashy but trashy manner off the field. The site he chose for his latest conquest was the Four Seasons hotel in Beverly Hills, after dining at nearby Avra with 40-year-old actress, Kiara Mia. Perhaps you know of her from last year's much-talked-about Cougars Gone Wild 2. While the choice isn't easy an easy one, Mia’s most notable performance was her breakout role, written to showcase the entirety of her actor’s instrument, in the critically-acclaimed Bra Busters 4, the most cinematically complex film in that storied franchise.

Since his unexpected mid-season acquisition from the New England Patriots last year, Garoppolo’s been touted as the team’s Messiah. The former Eastern Illinois University standout was the guy the Niners brought in to take over the helm from fallen one-time wunderkind Colin Kaepernick and re-energize a bedraggled franchise. The team made its new leader the highest-paid player in the NFL with a five-year, $137.5 million deal. That sum meant the 49ers execs believed that Garoppolo was a guy with good judgment, a trait that's more essential at the quarterback position than any other one. NFL quarterbacks just don't do what Garoppolo did in Beverly Hills.

Now I'm starting to wonder about Garoppolo’s decision-making, because in nobody's estimation is strolling about arm-in-arm with an adult-film cougar 14 years your senior and toasting her with wine in paparazzi territory good judgment. His date probably didn't take any chances though. I've got a mental picture of her bringing up TMZ from her phone contacts and discretely letting them know the trendy Greek place they were dining at. Then, once they'd repaired to their elegant Four Seasons room like most people do on their first date, Mia found time to subtly alert her Instagram fans that she was about to bag her catch. He better hope she didn't find a way to surreptitiously film their encounter.

Jimmy G got played. The aging Mia gained status by getting a young Adonis athlete making $30 million for the coming season to wine and dine her, and Garoppolo got some questionable publicity for himself and his team. It's not like he was out with someone like Scarlett Johansson or Taylor Swift. That would’ve been plenty cool.

The ground is thick in Los Angeles with svelte stunners that chick magnet Jimmy G could have his pick of if all he wanted was his ex to see a photo of his latest arm candy, or if he was just looking for a date. Yet he chose to chill at hotspot Avra with a major adult film star who’s dying for TMZ coverage to boost her career. If Garoppolo actually wanted that publicity, then that's some odd decision-making for an NFL quarterback. The NFL’s not the hip-hop world. Very few fans, outside the ones who had already heard of Kiara Mia before this news broke, are looking for this from their quarterback, and the 49ers front office certainly isn't after sinking all those dollars into their new savior.

Mark Cuban, always happy to perform for the camera, weighed in by saying he didn't think the high-profile date would be a problem for Garoppolo getting sponsorships. The billionaire's wrong, because he doesn't even know what Garoppolo’s currently endorsing and doesn't realize that the quarterback just got eliminated from a number of lucrative deals in the future. Corporations are careful when deciding whose name to link directly to their businesses because they fear a scandal tainting the brand. There have been a number of NFL players, none quarterbacks, known to have dated porn stars and none of them ever got a substantial endorsement deal.

If, against all odds, it turns out that this unlikely couple’s in love then he must follow his heart and not concern himself with the ramifications to his professional life. Perhaps TMZ will next capture him at the premiere of Bra Busters 5. But when your date’s Instagramming her fans as soon as you get back to your hotel room, she may have matters of commerce foremost on her mind.

I'll offer the guy who’s supposed to return my football team to greatness some business advice: any quarterback in the NFL could publicly date a porn star, yet none of them have, even the ones whose judgment is already questionable. As a quarterback, you have to accept certain limitations on your freedom. Take the Joe Namath playboy route if you want to enjoy your bachelorhood. Your earning potential’s unlimited if you don't mess it up. Finally, don't forget that you’re a big fat target for the Kiara Mia’s of the world. Elite athletes need to learn how to deal with that.