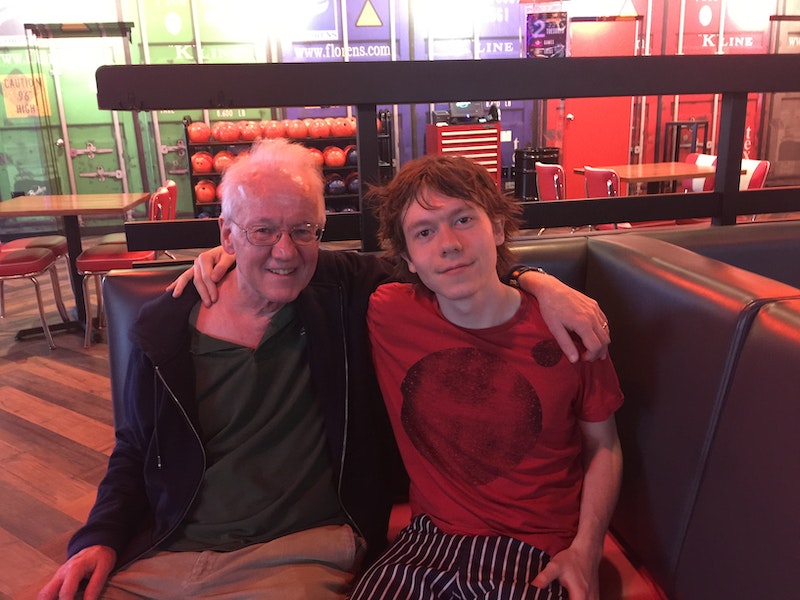 Until my wife busted her elbow in 2009, our family would drive out from Baltimore to Timonium—a depressing and dilapidated stretch of York Rd., with all the chain outlets that resemble similar suburban settings in Los Angeles, Chicago, Boston and Miami, as a start—every other month or so and play a few games at a run-down bowling alley. It was seedy, but at least during mid-afternoon there was a congenial crowd and we had a lot of fun.

Last Sunday, Father’s Day, I was itching to get in a round of miniature golf—an ersatz sport (like croquet or badminton) that I’m pretty good at, but the heat and distance of outdoor courses conspired against that idea. We’ve also, in the past, gone to Camden Yards to see the Orioles, but no one had any enthusiasm to see this year’s dreadful O’s play the Miami Marlins. Melissa, on a hunch, thought her elbow was sufficiently healed and off we went to bowl. It was jarring that the Timonium joint had, in the interim, become part of the chain Bowlero, and the blue smoke and mirrors were overwhelming as we entered the darkened facility. The employees were all chirpy and accommodating, perhaps fearful of a shitty Yelp review—in all honesty, I never read that garbage; Facebook and Twitter are bad enough—and in a matter of minutes we were all set up.

The vibe was curious: the place, with flashing advertisements, Bowlero two-fers, zing and zang sounds coming from God knows where, and wall-to-wall TVs, resembled a PG-rated strip club, and who knows, maybe at night when more people are drinking there’s more naughtiness in the air. Nevertheless, the four of us had, so to speak, a ball, competing ferociously (except Melissa) against each other, with a hilarious running patter. My younger son Booker, 23, affected an Eddie Haskell demeanor—“Good try, Mom! You’ll roll a strike next time around!—which was mostly aimed at his 25-year-old older brother Nicky, who just glared at him, Bobby Neuwirth-style as the non-stop study in unctuous baloney never let up. Until, of course, it was Booker’s turn and then he was quiet, focusing intently on the 10 pins.

(The picture above has Carnaby Street-Nicky next to his nearly senior citizen dad; Booker wouldn’t pose.)

When he blurted out, “Gee, Dad, I hope you win since it’s Father’s Day!, I simply looked at him with a face so dismissive that a normal person’s bones would rattle. But that’s not Booker.

As it turned out—none of us were too sharp—I took the first game and Booker the second, although he was quick to mention, no longer in play-act mode, that his greater point total made him the day’s champ. I brooked none of that malarkey, but after we paid the tab—a whopping $77, which included no refreshments—we got back in the car, declared the venture a roaring success, and resumed talking about music, movies and world events, and, as always, it was a smashing Father’s Day. Doesn’t bother me if it’s cash-grab Hallmark “holiday,” I’m not cynical enough to turn up my nose at a little bit of extra attention from the boys, who, braggadocio aside, are both wonderful young men. Melissa and I are fortunate parents. We joust at each other on a regular basis, but there have been few instances when the lance drew more than several drips of blood.

I didn’t bowl too much as a kid, but did at times frequent Century Lanes in my hometown of Huntington, New York. It was (and is) located on Wall St. just before the shank of the town’s commercial district—which in the 1960s was far smaller than today—and was the kind of greaseball palace frequented by “hoods” and operated by rumored Bad Men, if you get my Mario Puzo drift, and one that you didn’t bring up in conversation with your parents.

As a pre-teen I went a few times accompanied by one of my brothers, and then in the late-1960 with some fellow hippies. We weren’t old enough to drink yet—the legal age was 18 in New York—but were plenty stoned as we wandered around the pinball room, checked out the chicks with a “reputation,” accompanied by tattooed boyfriends, and though I can’t recall any specific untoward incident—at least in my experience—you really had to be on your toes. It was filled with the guys who were naturals in metal or wood shop classes at school, worked on cars and had splotches of oil on their jeans.

No class snobbery intended, for that wasn’t my nature, and besides, my own family squeezed the quarters till the eagles grinned. Just one of my friends was considered “rich,” which meant upper-middle class, and his bar mitzvah in 1968 was ritzy, including pick-ups by limo. That was a first for me, drinking a Coke, listening to Aretha and The Doors on the way to the temple. Rather, it was sociologically fascinating, in retrospect, to see how kids grew up. These were guys I knew from Little League and Boy Scouts, some from the really “poor side of town,” and by the time we were 14 or so you could see how future paths would take different turns. Some prospered—one terrific baseball player, a lousy student in junior high, got it together and graduated from Stanford.

On the other hand, a Scout buddy, upon reaching adolescence, turned into a girl’s nightmare, exposing himself (the gossip buzz the next day at school) to a petrified gal one afternoon and other sexual infractions, a pre-#MeToo character who probably didn’t fare too well in life. That’s just conjecture—he might be a wealthy Trump underling for all I know—but sometimes the stench emanating from an individual is so rancid you’d wager 100 bucks on his or her future misery.

Hmm, that’s not quite the jolly conclusion I intended for this column. Take the top half, and remember that the cheese is hard, my friends.