Pitchers, catchers, everyone under the sun. 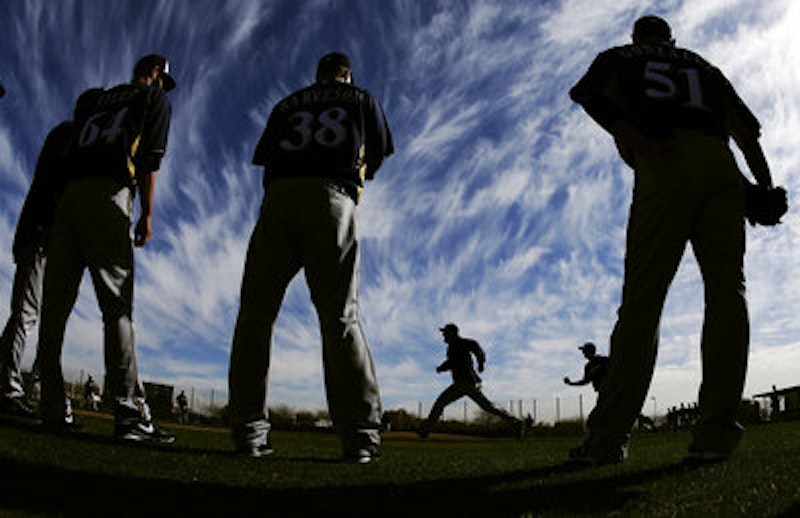 As snow batters the Northeast yet again I find the clarion call of “pitchers and catchers” has lost its allure and therefore its meaning. It was once a welcomed salve of a statement, and several years ago it was hard not to notice certain joints in Manhattan’s East Village that used to count down the days on a sidewalk chalkboard. “22 days until pitchers and catchers” would be scrawled outside 2A or Sophie’s or the Horseshoe Bar or Two Boots in the pre-hipster era of spectator sports interest. Charming reassurance that winter’s icy grip would suffer from Carpal Tunnel Syndrome and the horsehide would soon set us free.

These declarations were always a precursor to Valentine’s Day. They were cute back in the early 1990s, but now they reek of an Eisenhower-era romantic notion that Spring Training was about to begin when the overweight hurlers and backstops reported after a winter of selling Fords or insurance policies back in their hometowns. It is now widely known the modern athlete is a 24-7, 365 guy doing hot yoga and pilates in between over-the-counter General Nutrition purchases and treading the wrong side of the fine-print league rules governing various substances and medications. Most of players have already been camped out in Florida condos not far from some multi-sport mega-training center where Andre Agassi wasted away his childhood. For the present-day member of the Major League Baseball Players Association, the offseason is about two weeks long. Noses belong on grindstones else you won’t get cast in a Gatorade commercial and henceforth be empowered to announce your upcoming retirement well in advance of opening day, thus earning the repeated “farewell tour” which rains down zany gifts from the teams you are supposed to be defeating on a regular basis.

Spring Training is a left-arm only sunburn and souvenir cups tossed into the rear seat of your rental car you’ve decorated with stickers from a goth club in Tampa. Spring Training is last-minute efforts to find a motel room on the Gulf Coast during the NCAA Final Four taking place in St. Petersburg. Spring Training is having senior citizens pour you a three-dollar beer into the aforementioned souvenir cup that is the size of a dorm-room garbage can and wish you well young fella. Spring Training is a cheap seat smudged with sunscreen and a decent angle to watch Warren Cromartie try to make a comeback with whatever team will take him in Jupiter or Carlos Pena striking out yet again to a few boos in Sarasota or Pat Meares with a heavily wrapped ankle in Fort Myers.

Spring Training is swimming in the Gulf of Mexico in the morning, watching the Blue Jays at mid-day in Dunedin, driving east and swimming in the Atlantic at tea time and then watching the Nationals entertain the Marlins under the mothy lights in Viera. Spring Training is driving slowly by the Holiday Inn in Kissimmee where in March of 2000 five Astros players were held hostage by gun-toting robbers who had a shootout with the cops. Spring Training is staring out at Little Lake Nellie in Clermont, Fla., where in 1993 Cleveland Indians pitchers Tim Crews and Steve Olin were killed in a nighttime boating accident that Bob Ojeda somehow survived. Spring Training is watching the Dodgers play in Vero Beach right next to the aviation school where the 9/11 pilots trained and did not pay attention to the lessons about landing the planes. Spring Training is sitting in that same quaint ballpark to watch Mike Piazza chasing Guillermo Mota into the clubhouse, which was the same one where Kevin Brown, after nailing Brian Jordan, broke the toilet in a fit of rage.

Spring Training is drag-racing Pirates first baseman Kevin Young on I-75 from Port Charlotte back to Bradenton while driving a ridiculous yellow Pontiac Aztec, the last car in the Dollar Rent-A-Car lot. Spring Training is sharing an umbrella with Manny Sanguillen visiting a rainy McKechnie Field, where later under perfect moonlight you can wander back into the ballpark, take a seat and drink in the nighttime diamond all by your lonesome. Spring Training is attending the Barnum-esque “human versus dog” sprint race at the otherwise abandoned Melbourne Greyhound Park as your evening entertainment after a 10-for-1 drink special at a bar on AIA where you can see the Atlantic surf crashing onto the sand.

The ringing the bell and sounding the alarm of “pitchers and catchers” is also kind of lost on those of us already engaged by the competition of the 2015 Caribbean World Series seen streaming on the Internet (CanalesDominicanosEnVivo.com). San Juan was hosting, and Cubans were defecting and there was a search for prospects and drowsy scouts behind the plate. In the blurry broadband on my Westinghouse monitor, half the batters resembled Pudge Rodriguez and the rest looked like Miguel Cabrera without the vodka bottle on the dashboard camera. Cuba eked out a win against the usual victors Mexico, and the Hiram Birthorn Stadlum was mostly empty for the early round games and even for the championship tilt.

I had a humorless fellow in my taxi who’d just landed back in the Hudson Valley after an extended stay in Puerto Rico. I mentioned watching the series online and the light attendance, and the passion of the few fans that were in the house. This got no response from my passenger. “I don’t know much about that,” he says to me he says. “I was in Vieques, it’s kind of a remote island.” Yes, I’ve heard of that place, I say, and think back to when a half-dozen Dartmouth students ran onto the field in May of 2000 at Yankee Stadium to protest U.S. involvement in Vieques. I was in the right field bleachers and blinked and missed it, or maybe I was slicing limes for the Cuba Libres we were making after the sudden alcohol ban that year thanks to Chad Kreuter’s venture into the Wrigley stands to fetch his stolen Dodgers cap. The taxi passenger’s bad attitude didn’t help the Puerto Rican squad as they were the first ousted in the oddball five-team tournament.

Florida’s Grapefruit League has taken its share of team defections to Arizona (Reds, Royals, Indians come to mind) and now the Nationals want to leave the fake suburbia of Viera (outside Melbourne, Fla., along I-95) and the Astros want to vacate the Disney leach bed that is Kissimmee with its Jim Jarmusch-at-an-old-Italian-restaurant charm and 10,000 stoplights. Both teams want to camp out in new digs at West Palm Beach, which last hosted the doomed Montreal Expos in 1997. At least the Nats and ‘Stros would still be in Florida.

A week in March spent traversing Florida’s byways in search of Spring Training baseball action somehow puts the games and players back on a human scale, one that becomes elusive when the summer is progressing and the hype machines are redlining.