Is Cleveland the most cursed NFL franchise in recent memory? 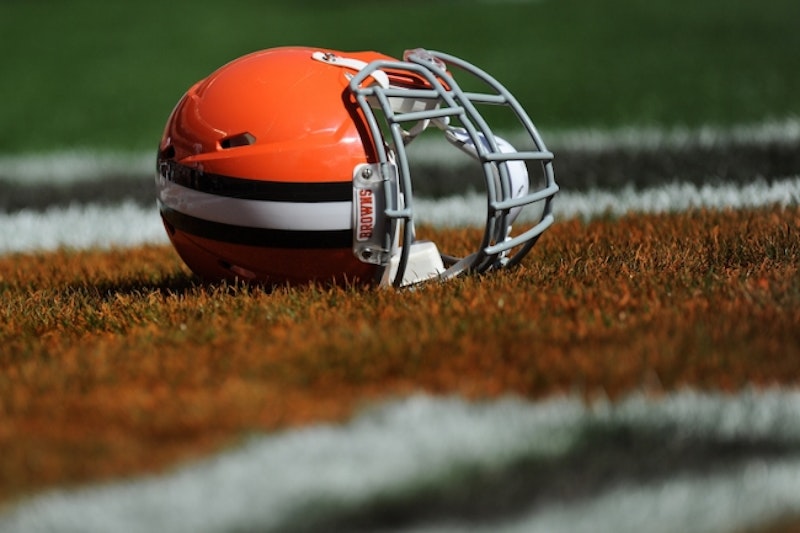 The Cleveland Browns traded the second overall selection, and presumed draft rights to QB Carson Wentz, in next week’s NFL draft to the Philadelphia Eagles earlier last week. The move was a head-scratcher given Wentz’s meteoric rise and Cleveland’s decades-long search for stability at the most important position in American sports. The trade drew criticism from all corners to the Browns’ revamped front office.

Cleveland’s ineptitude in scouting, drafting and developing quarterbacks would be comical if it weren’t so tragic. The Browns have featured a revolving door at QB since the team drafted Tim Couch with the first pick in the 1999 draft. Couch flamed out in Cleveland, because who doesn’t, and the Browns have been gun-shy about taking quarterbacks in the early first round ever since. The Browns have drafted in the Top 10 of the draft nine times in the past 16 years and failed to select a single quarterback. The only QBs that Cleveland’s taken in the first round since the Couch fiasco are Brady Quinn, Brandon Weeden and Johnny Manziel. Each of those flops was selected with the 22nd pick after serious pre-draft questions about their talent level and/or attitude caused their stock to slide. The Browns look like they’re setting themselves up for another fall.

Cleveland signed Robert Griffin III, former Redskins’ migraine inducer, to work with new coach and QB whisperer Hue Jackson. The move made little sense for either Griffin or Cleveland. Griffin desperately needed to land with a stable organization in an attempt to re-establish his NFL career. Instead he chose the least stable organization in the sport. Cleveland simply adds Griffin to the never-ending Weeden-Hoyer-McCown-Manziel carousel of mediocrity.

The Browns had a chance to re-write their bleak history. The new front office, led by Sashi Brown, had the opportunity to break the cycle of perpetual servitude to the powers of the AFC. Wentz, the rocket-armed QB from North Dakota State and workout darling, was sitting there for the taking. (The presumption is that the Rams will select Cal QB Jared Goff with the first pick.) Instead of simply selecting Wentz with the second pick the Browns blinked... again.

The criticism isn’t fair to Sashi Brown or Hue Jackson but this sure feels like the same old Browns. After two decades of desperately searching for a franchise QB Cleveland had one gift-wrapped. All they had to do was wait a week and hit him on his cell phone. Now Wentz will go to the Eagles and the Browns will hitch their wagon to what remains of RGIII. There’s already talk that Cleveland could trade further down in the first round and that the team is enamored with Memphis QB Paxton Lynch. Of course they are.