Searching for street-level fandom in the Barclays Center shadows. 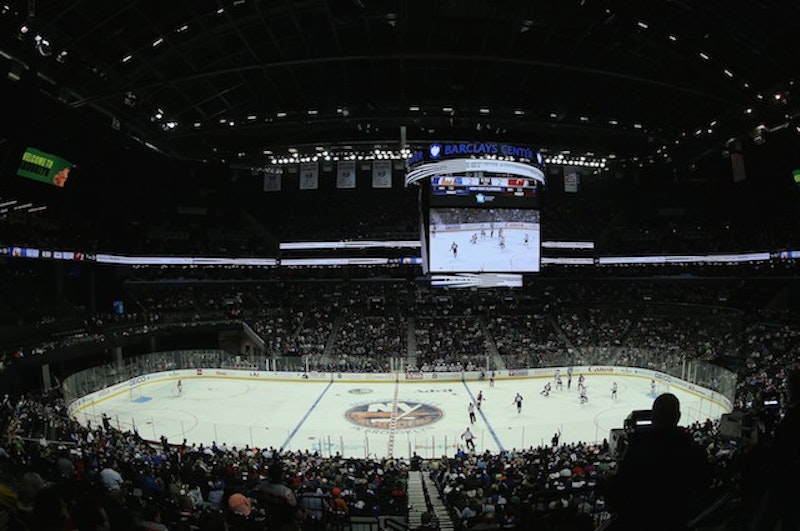 The New York Islanders appear to be misnamed, now more than ever. When you leave Manhattan on a D train that lilts up onto the Manhattan Bridge and carries you staggeringly slow to its first Brooklyn stop at Atlantic Avenue/Barclays Center, the gorgeous late April sunset shows off the real island you are leaving behind. The train lurches from the skinny land mass of Manhattan into the gargantuan peninsula slash that runs all the way out to Shelter Island. Brooklyn has, of course, taken on the center-of-the-universe status for everything from real estate extremes, hipster enclaves and now a place that has filled in that Dodgers sports pothole with two pro franchises housed in an arena in Jay Z’s backyard.

The NBA’s Brooklyn Nets have been no great shakes, but the Islanders, who abandoned their barn out in Uniondale to play in the tight-squeeze of the Barclays Center this season, might be catching on with the locals. “See It Live” is the Islanders slogan papered across the doors of the somewhat controversial arena. It’s oxidized and mossy already (and on purpose), and as the Islanders began round two of their Stanley Cup playoff run last week, the streets around the venue shrugged. On face value, it would appear that hockey’s iconic trophy would be quickly tagged and dented up if left outside on Flatbush Ave. for any length of time. I lived almost 20 years in the Fort Greene neighborhood that is now propped up next to the building that resembles a discarded curling beer can tab dropped from the sky landing between Park Slope and Prospect Heights. My memories of the old pre-arena neighborhood included uniform shops, recruiting stations and nameless state offices dotting the landscape with the usual on-the-run insurance brokers, a bail bondsman and a mom-and-pop sporting goods store.

As the second round playoff series opened in Tampa, I decided to return to the old neighborhood and see how the storied suburban hockey franchise was meshing with the locals, and vice versa. That D train ride—still a crushing commute even at seven p.m.—did put me pretty close to the venue that has a certain approachable façade especially in comparison to the Penn Station sewer where the New York Rangers play their home games back on the island of Manhattan. Vape stores have emerged where some of the mom-and-pop (usually just mom) storefronts used to be. Modell’s tries very hard with a mega-store stocked with Islanders gear in the windows. Fourth Ave. seemed void of any taverns that might be showing the game, so it was up Flatbush to Fifth Ave. where I found two venues of note.

McMahon’s Public House sits where O’Connor’s once stood with its B63 bus stop still intact outside the front door. The label on the bus sign reads “Cobble Hills” which gives it more of a “street” ethos. Inside were a half-dozen Islanders fans wearing jerseys and peering up at first period action on one of 13 televisions, 11 of which were showing the hockey game. The aforementioned nameless state offices still seem to be in the area as McMahon’s was half-full with lanyard-wearing post-work cocktail groups. Office gossip competed with Shane Prince and his hard work to give the Islanders the lead. When he scored, there were jokes from the office workers about how they “thought Prince was dead” and one guy was trying to impress a female co-worker with his knowledge of the old Hartford Whalers from his days growing up in Connecticut. Outside on the sidewalk was a sandwich board propped up with the words “sports bar” capitalized at the top. There was a second-floor beer garden sitting empty as the sun set on a very cool evening with steady breezes whipping up Fifth Ave. bound for the loopy plaza of the Barclays Center. Its video projections and changing color “cells” along the outside of the arena give it a certain “Fifth Element” feel that makes one search for Mila Jovovich just for the heck of it. Inside McMahon’s was a middle-aged couple decked out in Islanders gear. I got a good look at the “inaugural season” shoulder patch on the guy’s jersey featuring a kind-of-Brooklyn Bridge that might be the Whitestone upon closer inspection. They were calling the shots and surrounded by a few lone wolf Islander supporters who practiced the Nassau Coliseum organ riffs on the bartop. Sure, McMahon’s had an autographed Islanders hockey stick in a case along the wall, but like much of the neighborhood support detritus, there was an off-putting “newness” to it all.

Pizzerias suctioned cupped banners to front windows, managing to keep the Islanders logo upright. As the state office workers began to couple up during the first intermission, I exited to the street to find The Montrose on the next corner. It didn’t need the sandwich board, though it seemed to be having an identity crisis in the artsy lounge vs corner sports bar realm. The Montrose had six TVs showing the game. And six customers. Millennial bartender wearing brand-spanking new Islanders ballcap and a Tavares shirt off the nearby Modell’s rack. His wing-man customer with the fancy phone was classic Islander fan profiling. They tend to follow Mets fan profiles: bespectacled, pipe-cleaner arms, picked on as kids. But of course whip-smart and over-employed and trying to buy everyone drinks. The Montrose was more user-friendly for the hockey watching because they had a drunken regular who was making an appearance during the first intermission with the Isles up 3-1. He’s a Jason Bateman type, well-dressed and super boozy, and he spills Jon Lovitz-style pathological liar tales. Like the time he was with Eliot Spitzer at the Barclays Center and had better seats than the former governor. He also met Olivia Newton-John once. To see the millenials laugh him out the door was somehow refreshing because he wanted to borrow my Eisenhower car coat because he was “suddenly cold.”

The wingman was an Isles fan from way back, when he lived on the Jersey shore and Devils fans used to beat him up. Now he lives in Lefferts Gardens, “across the park” he tells me. “It used to be a place you wouldn’t go,” he says. I ask about O’Connor’s and get blank stares. Both these kids and another guy having dinner at the bar who works sound for some Barclays Center concerts had unbridled enthusiasm for the hockey team that had dropped into their collective laps. If you crane you neck just so from The Montrose, you can see the odd blue eagle part of the Barclays logo on the side of the arena. The bartender was liking the playoff schedule that puts the Isles on Flatbush Ave. on a Tuesday and Friday night. The arena is cozy, they say, the second-smallest venue in the NHL. Cheaper than the Garden, of course. I float my idea that the Islanders are misnamed. The skinny wingman kid gives me a stare. “We could never rename them!” he says motioning toward the street like there would be some type of riot out in Roslyn.

As the second period progressed I decided to walk out and into the night and right up to the Barclays Center doors. In doing so I experienced the universal smell of all arenas everywhere: burnt popcorn. I dare anyone to stand in the door of an arena, especially on an off night, and not smell the aroma of the overcooked corn. It can’t be done.

As I plied my way toward the old Fort Greene digs, I recalled a Facebook post from punk rock publisher Jack Rabid a few days back. He was at the first-ever Stanley Cup playoff game in Brooklyn and was thrilled by the Isles overtime win over the Florida Panthers and posted video of some fan mayhem in the upper seats. Rabid explained that he was a Rangers fan, but “any team that wants to move to a 10-minute walk from my house, I’ll become a fan of theirs too.” I thought of that as 79 Lafayette Ave. loomed in front of me. Little had changed regarding the door. Same black paint, same hardware store sticky-numbers intended for mailboxes. The ground floor apartment looked abandoned. Had there been a team that was a six-minute walk from this door back in 1988 when I moved into this building with my college girlfriend from Cincinnati, I might still be there to this day.

On the corner at 71 Lafayette was a generic sports bar called Mullane’s. They had lots of new banners of every New York sports team hanging in front, and the Islanders skated toward a third period that would see Tampa challenge them a bit. Back in 1988, Mullane’s was a bodega run by two brothers from Yemen who had pictures of their homestead carved out of the side of a mountain overlooking the valley of Shibam. They sold Dragon Stout at great discount and I listened to the Jesse Jackson “Thing of Beauty” speech with them as they sat on milk crates in front of their store during the 1988 Democratic Convention. It was a hot night, and Jackson’s voice echoed from their small black-and-white Emerson television and out of opened brownstone windows up and down the avenue. That was a powerful evening on that corner, but last week it was somewhat faceless and oddly generic.

So for some baffling reason after this trek through the past, I’m rooting for the Islanders to stitch together some type of hockey miracle. I only hope their blue-and-orange patch is big enough.