A lights-out bullpen and return of Tillman put team at top of AL East. 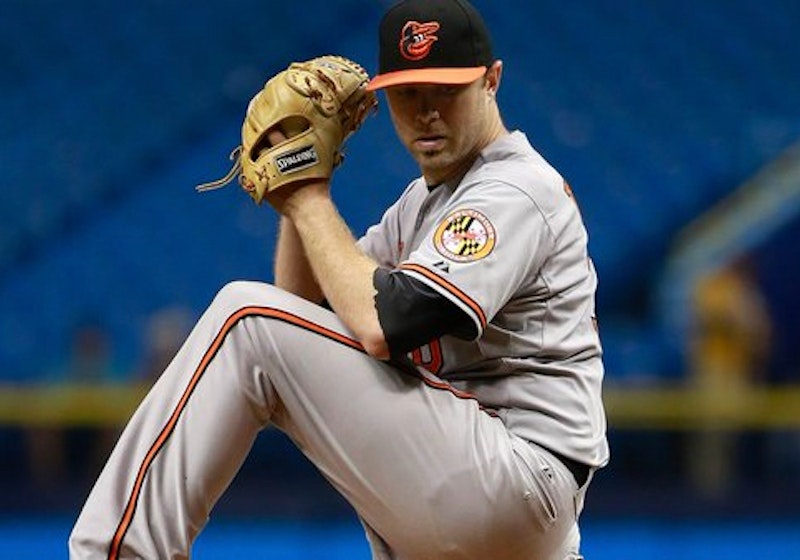 The Baltimore Orioles got off to a fast start in the 2016 season before last week’s 2-4 road trip. Baltimore figures to be in the thick of the hotly contested American League East race this season despite shaky starting pitching. The first four turns through the O’s rotation has yielded some scary numbers (just five quality starts in 20 games) and one pleasant surprise.

Chris Tillman, fresh off a sub-par 2015 campaign and a Spring Training hip injury, has been the best Oriole not named Manny Machado so far this season. Tillman has only logged 24 innings in his five starts, thanks in part to a rain-shortened Opening Day appearance, but all of his peripherals are trending in the right direction. Tillman’s been on a downward spiral over the past three seasons in terms of WHIP, hits per nine innings and strikeouts per nine innings. Apparently, he’s recovered from his nagging hip and returned to the 2014 form that helped lead the O’s to the division crown. Though the sample size is small (25 innings), Tillman is posting career best numbers in strikeout rate, home run ratio and strikeout to walk ratio.

Tillman’s turnaround was accompanied by Monday’s return of Kevin Gausman. The 25-year-old righty missed the season’s first three weeks due to shoulder tendonitis. With Wei-Yin Chen in Miami and Tillman a question coming into the season the time has come for Gausman to step up. He didn’t disappoint in his first outing as he hit triple digits on the radar gun and fanned seven Rays in five innings. The Orioles lost Gausman’s season debut but his performance was still encouraging. Gausman’s ability to take the mound every fifth day will be a big boost to Baltimore’s postseason chances.

The Orioles also have to be encouraged by the performance of long-time prospect and disabled list designee Dylan Bundy. The fourth overall pick in 2011 missed most of the past three seasons for a variety of injuries. Bundy had to be included on the O’s Opening Day roster or risk being lost to waivers. Now he’s an integral part of Buck Showalter’s lights-out bullpen. Baltimore’s bullpen has been as outstanding as the rotation has been shaky. Bundy’s logged nine innings in a variety of roles and has pitched on consecutive days. Bundy isn’t missing many bats, just two strikeouts in nine innings, but he’s been healthy for nearly four weeks.

Bundy is joined in the pen by Mychal Givens. As Brad Brach has assumed the seventh-inning setup role ahead of Darren O’Day and Zach Britton, the duo of Bundy and Givens has formed a bridge for the struggling rotation. Givens flashed potential in 22 games for the O’s last season but he’s been dominant in April. Givens, drafted as a shortstop, is Baltimore’s answer to Dellin Betances. The 26-year-old Givens has whiffed 19 batters in just 11 ⅓ innings.

The Orioles sit atop the AL East despite little production from their potent lineup. Machado and Mark Trumbo have been terrific in April but the rest of the team has yet to live up to their offensive potential. The O’s have to feel great about their spot in the standings given the lackluster starting rotation and struggling offense. The team’s success is largely due to the stellar work of the bullpen and Tillman’s return to form.