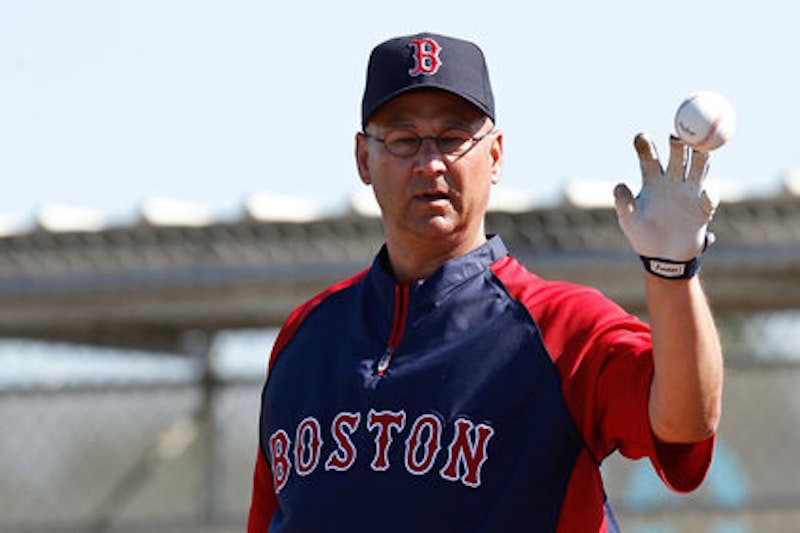 The publishing industry is unquestionably turbulent today, but here’s something that remains a constant: celebrities or athletes who’ve attained a degree of notoriety usually won’t have any difficulty obtaining a book deal. Does it matter if the targeted audience for such material is quite small? Apparently not, as Francona: The Red Sox Years (Houghton Mifflin Harcourt), a vengeful book by former Boston manager Terry Francona (as told to Boston Globe columnist Dan Shaughnessy) amply demonstrates.

Francona, who was at the helm for two Red Sox World Series championships during eight years in Boston, was fired (or “resigned,” really just semantics) after a disastrous September collapse by his team in 2011, and has an axe to grind against his former employers. That’s fair, since the lifetime player/coach/manager was let go in an unspeakably tawdry fashion by the franchise’s owners, with disgraceful details about his personal life leaked to the voracious Boston media. (I happen to like the work of many of those reporters, including The Globe’s Eric Wilbur, Chad Finn and Peter Abraham and the Herald’s Michael Silverman, not to mention the great website Boston Dirtdogs. Francona, working under extremely stressful conditions in a sports-obsessed market, was the most successful manager the team ever had, and his exit was, to be charitable, undignified and messy.

So, on the surface, you’d think that an expose of the ugly side of the celebrated Red Sox ownership—led by the reclusive and fabulously wealthy John Henry—would draw a large number of readers. (And, to be fair, as Francona has pointed out after excerpts of the book were published, the book also covers much of his buoyant experiences with the Sox.) However, the circumstances of Francona’s dismissal, as well as his mostly successful years in Boston, were so exhaustively covered in the fall of 2011, that the scorned manager has virtually nothing new to say. Obsessive Sox fans, of which I’m one, already know 90 percent of what’s contained in Francona, and for the millions of other baseball enthusiasts, let alone casual readers, there’s virtually no incentive to read this book. Does a Minnesota Twins season-ticket holder, for example, really care about Francona’s vendetta against Henry and co-owners Larry Lucchino and Tom Werner? It’s doubtful. Had the book been rushed into print a year ago, when the wounds were still fresh, it might be different: however, Francona has moved on, first as an ESPN analyst and now as the new Cleveland Indians manager, and Red Sox fans who suffered through the team’s 93-loss 2012 season have more pressing worries.

That’s not to say there aren’t interesting bits in this book. Francona, who was extensively interviewed by Shaughnessy, is funny, profane, repetitive, not particularly articulate (one of his favorite phrases is “dumb-ass,” as well as earthier epithets) and self-deprecatory, and would appear to be an amiable fellow to share a meal with. He’s also physically courageous: repeatedly injured as a player, Francona has undergone over 50 knee surgeries, nearly died in 2002 as a result of pulmonary embolisms on each side of his lungs, has a difficult time simply walking because of blood clots, and though he takes pain medication, apparently doesn’t complain.

He’s a caring man, evidenced poignantly by his relationship with star pitcher Jon Lester, who was diagnosed with lymphoma in 2006. Lester went on to beat the cancer, and continue his career, but during his absence Francona guarded the young man’s privacy ferociously. His knowledge of baseball is extensive and the stories of his championship Red Sox teams (2004 and 2007) are often hilarious. But we already knew all of that.

Francona and one of his adversaries, Henry, are alike in at least one respect: both are painfully passive-aggressive. The Red Sox majority owner, who’s legendary for communicating mostly by email as opposed to speaking directly to the media, avoids confrontation like the plague (unlike Lucchino, the team’s most vocal, and acerbic, management spokesman). Yet, on occasion Henry would show up unannounced at a local media outlet to speak with passion about his team. Francona, for his part, returned to Fenway Park in 2012 for the storied ballpark’s 100th anniversary celebration, even though he’d repeatedly declined invitations. He received the loudest ovation from the sold-out crowd that day, and then exited the park as soon as possible. One might question why he’d even entertain the idea of giving the team’s ownership group the satisfaction of his return, but then much of Francona’s behavior after the fall of 2011 was confusing.

Ahead of the book’s release, Sports Illustrated printed an excerpt of Francona, inevitably focusing on the controversial break-up. The following quote from Francona caused a minor stir: “[The Red Sox owners] come in with all these ideas about baseball, but I don’t think they love baseball. I think they like baseball. It’s revenue, and I know that’s their right and their interest because they’re owners—and they’re good owners. But they don’t love the game…. It’s not in their blood… It’s different for me. Baseball is my life.”

Almost immediately, former Red Sox general manager Theo Epstein (now president of baseball operations for the Chicago Cubs), who’s depicted in Francona as allied with Francona on most baseball decisions, and who agreed that the Sox “brand” had become too big, disputed his former manager’s comments. In an email that, in part, appeared on ESPN’s website, Epstein wrote: “I spent a decade in the organization… In my opinion, John, Tom, Larry do love baseball and care deeply about the Red Sox and Red Sox fans.”

As baseball fans in general, and Red Sox fans in particular, know, a winning team makes squabbles between ownership and managers less consequential. Francona’s final year in Boston didn’t go well. And so he was dismissed in a publicly ugly manner. In the aftermath, Francona had built a reservoir of good will because of the shabby treatment he received. With his spiteful Francona, he’s returned the favor, preferring to take a cheap low road rather than remaining a Red Sox martyr.