Justin Tucker Gives Ravens a Leg Up on 49ers

But will it be enough? 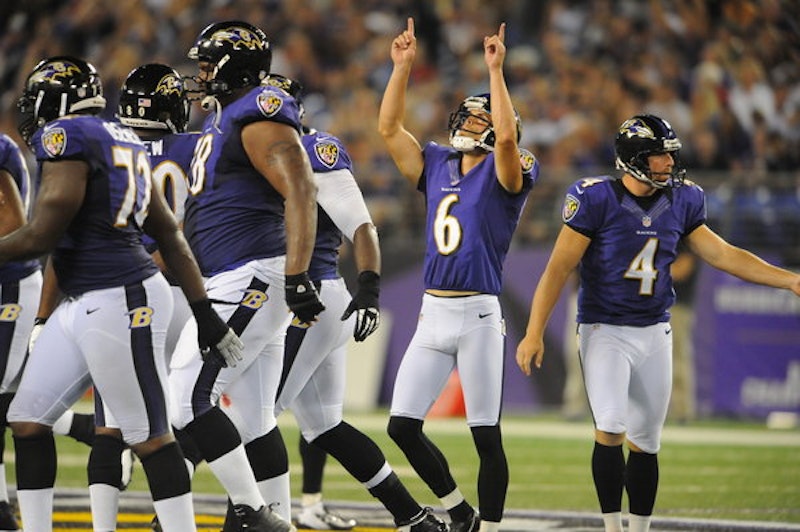 Baltimore Ravens’ coach John Harbaugh has received praise for making two bold decisions that propelled his football team to the Super Bowl. Harbaugh fired friend and offensive coordinator Cam Cameron after a disappointing November loss to the Redskins. A few weeks later the coach inserted much-maligned offensive tackle Bryant McKinnie into the starting lineup for the opening round of the playoffs. Harbaugh’s riskiest decision may have come in training camp and could play a huge role in determining the outcome of Super Bowl XLVII.

Harbaugh and the Baltimore front office made the decision to cut veteran kicker Billy Cundiff during the pre-season and hand the job over to rookie Justin Tucker. The Ravens signed Tucker as an undrafted free agent out of the University of Texas. This was met with great anticipation from the Ravens’ fan base, as many simply wanted anyone but Cundiff to be the team’s kicker in 2012. Cundiff will forever be remembered for the kick he didn’t make. His missed field goal at the end of regulation in last year’s AFC Championship versus the Patriots ended the 2011 Ravens’ Super Bowl quest and likely cost him his job.

Tucker made the decision easier by clearly outkicking Cundiff in training camp, but as an unproven rookie on a team with championship aspirations he entered the season with little room for error. Tucker got off to a fast start and never looked back. He drilled two kicks in excess of 50 yards in a Week Two loss to the Eagles. Not only did Tucker take Cundiff’s job, he also took his chance at redemption when he nailed a game winner as time expired in Week Three against those same Patriots. Tucker rewarded Harbaugh’s faith by hitting on 30 field goals in 33 attempts, including going four-for-four from beyond 50 yards.

The 49ers come into the Super Bowl week with a similar situation to the one that the Ravens faced last year. A veteran kicker, in this case David Akers, struggling with consistency. Akers has made plenty of big kicks in his career but he’s hit on just 30 of 44 attempts this season including the playoffs. He missed a fourth quarter kick against the Falcons in the NFC Championship that would have given San Francisco a seven-point lead. Akers’ heart may have skipped a beat when the Falcons final drive ended on the 49ers 10-yard line. Akers has been in a slump since San Francisco’s Week Nine bye. Making matters worse, he’s hit just 11 of the 19 field goals he’s attempted this season on artificial turf; a stat that doesn’t bode well considering the Super Bowl will be played indoors at the Louisiana Superdome.

John Harbaugh’s decision in August to go with the rookie kicker with the big leg now gives him a clear advantage over his brother Jim as they prepare for the biggest game of their lives.