Nolan Reimold Could Be Orioles X-Factor In 2013

Or he could get injured again. 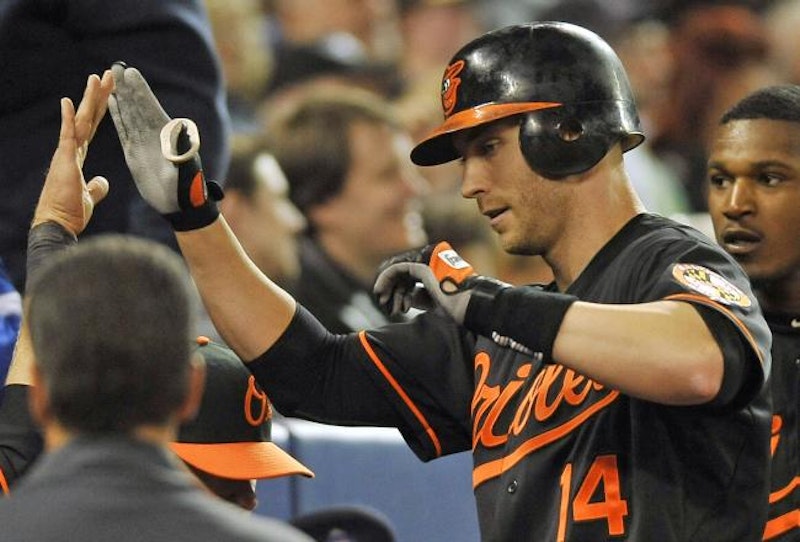 The Baltimore Orioles have been roundly criticized for their remarkably quiet offseason. Rumors of trades and free agent signings have surfaced for the past few months but to date nothing has come to fruition. Baltimore’s only move of note was re-signing reclamation project/left fielder Nate McLouth to a one-year contract.

The Orioles came into the offseason suggesting that they hoped to add a right-handed power hitter to the middle of the lineup. Dan Duquette allowed Mark Reynolds to depart as a free agent, upsetting a large number of O’s fans. Apparently Reynolds’ poor defense, prolonged slumps, and staggering strikeout rate endeared him to many of the Baltimore faithful. I had no issue with Reynolds leaving town because the assumption was that Duquette would go out and get someone better suited to hit in the middle of the order. Spring Training is just a few weeks away but the Orioles still have a Mark Reynolds-sized hole in the batting order.

As the free agent options have dried up, and the trade market for Michael Morse, Josh Willingham and Corey Hart has yet to develop, the Orioles are left with few options. An old, familiar name could hold the key to the Orioles’ 2013 lineup. Enter Nolan Reimold.

Reimold’s the forgotten man in the Baltimore outfield, and with good reason. The once highly-regarded prospect has battled injuries and personal problems for much of the past four seasons. Now 29, Reimold can no longer be considered a prospect. After playing just 246 games over the past four seasons he’s more appropriately labeled as a suspect, but he could be a key player in the Orioles’ 2013 quest to make a return trip to the playoffs.

Reimold started the 2012 season as the Orioles’ opening day left fielder and leadoff hitter. He got off to a blazing hot start, slamming five home runs, driving in 10, and posting a .960 OPS in 16 games. As has often been the case, Reimold succumbed to a herniated disk in his neck in mid-April and didn’t play another inning for the O’s. Reimold’s neck injury set off a near season-long search for a left fielder that culminated in McLouth’s August renaissance.

In a perfect world Reimold will report to Spring Training fully recovered from his neck issues and ready to compete for a spot. A healthy Reimold could provide O’s manager Buck Showalter with the right-handed half of a platoon at designated hitter or better yet a full-time option in left field. Reimold has actually hit righties slightly better to this point in his career. Wilson Betemit is a defensive liability but he can hammer right-handed pitching. If Reimold can be the everyday left fielder then Showalter would have the option to platoon Betemit and the lefty swinging McLouth at DH.

I know the idea of the oft-injured Reimold manning left field and a McLouth/Betemit DH platoon won’t garner much confidence from O’s fans, but barring a late winter trade it looks increasingly likely. Duquette may just be trying to buy himself some extra time to evaluate some of the club’s young pitchers before pulling the trigger on a trade. If the McLouth/Reimold/Betemit trio falters, then Duquette can go after a soon-to-be free agent hitter like Morse or Hart during the season.

But if Reimold can stay healthy and prove that his hot start in 2012 wasn’t a fluke he could render a trade pointless. Reimold’s career .794 OPS and HR rate compares favorably to Corey Hart (.824) and Morse (.839). A trade for Morse or Hart would almost assuredly cost the Orioles a few of their promising young hurlers. The hope is that Reimold can provide similar production at a fraction of the cost.