Trash talking the sport's idols and throwing chairs isn't getting him any love. 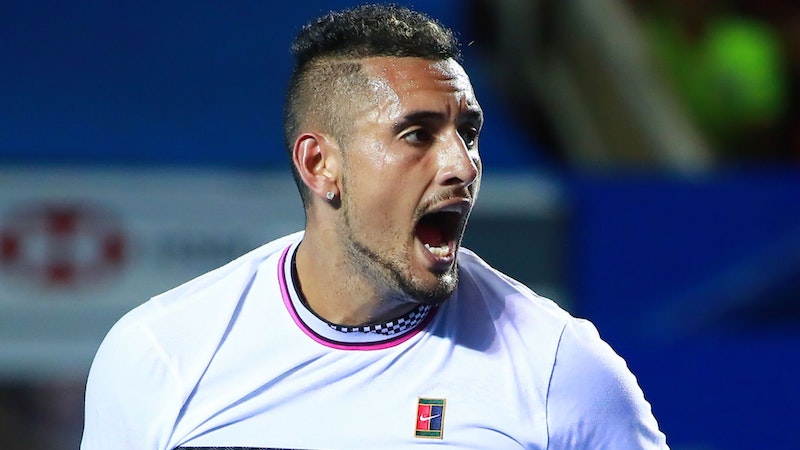 ATP tennis player Nick Kyrgios had a turbulent 24 hours last week, even by his own unique standards. It started when the Aussie went on New York Times tennis reporter Ben Rothenberg's podcast and dished on some of the game's biggest stars while also confessing to a stunning level of laziness towards his tennis career. At the time, nobody knew that tennis's enfant terrible was merely adjusting the volume upwards prior to the crescendo he'd deliver during his next day's match at the Italian Open in Rome, but more on that later.

Kyrgios’ Lotus Eater approach to tennis is scandalous by current standards, and he wants everyone to know about it. The five-time ATP tournament winner told his interviewer, with a laugh, that if not for his “caretaker,” he would’ve slept past his match time that morning, as if he were talking about a brunch date. The 24-year-old Cannberran also owned up to preparing less than any other player in the top 100, saying that he doesn't work as hard as well-known tennis slacker, Bernard Tomic. The message was that everyone else takes tennis way too seriously, which is in keeping with his (perhaps intentional) underachiever status. Kyrgios is the Holden Caufield of the tennis world, adopting a bad attitude in a vain attempt to protect him from its pain and ugliness.

Champions don't brag about their lamentable work ethic, but Kyrgios, with his “What, me worry?” insouciance, is a champion truth-teller. Rarely does an elite athlete in any sport speak with this level of candor. He told the podcast host that he has a hard time practicing even 45 minutes per day, and about going out every night in Acapulco until four a.m. during the Mexican Open in March, the last tournament he won, beating Rafael Nadal in the final in straight sets. Kyrgios said he got “hammered” at the post-tournament players party, an “all white” affair he attended clad in “all black.”

Then it was on to spilling the beans on ATP players. Kyrgios had nothing but good words for Andy Murray and the untouchable Roger Federer, but when asked about Fernando Verdasco, who the dirt-seeking Rothenberg knew he hates, Kyrgios called him “the most arrogant person ever." The world number 36 was no kinder to world number two, Rafael Nadal, who dissed him after their final in Acapulco as someone who has no respect for the game, the fans, or himself. Kyrgios returned the favor, calling the Spaniard a poor sport who's only gracious in victory. World number one, Novak Djokovic, who Kyrgios has beaten in both of their meetings, has “a sick obsession to be liked.” “His whole [post-match] celebration thing,” said Kyrgios, “is so cringeworthy.” Discussing Swiss player, Stan Wawrinka, who he once informed, mid-match, that Greek player Thanasi Kokkinakis had “banged” his girlfriend, Kyrgios said he didn't have any regrets over the incident.

Nick Kyrgios performs well against the top players because they motivate him. It's the nobodies on the tour who give him trouble, as if he can't be bothered to summon up his talent for the plebes. It's an odd problem for someone who's never won a major himself and isn't even in the top 30, but Kyrgios is a tennis oddball whose self-image is built on his sporadic peaks rather than his day-in, day-out results.

The day after interview, during the third set of his second-round match with 76th ranked Casper Ruud, Kyrgios earned a game penalty for misbehavior and his switch flipped. Receiving insufficient catharsis from slamming his racquet down and kicking a water bottle, he then threw a folding chair onto the court,  announcing, “I'm done,” before shaking hands with the chair umpire and heading to the showers. He'd lost a tight tie-breaker in the second set to Rudd that would’ve clinched the match, and this was a way to avoid grinding out the third set on the clay surface he despises.

The tennis world was already in a state of high anxiety over the temperamental star's candid assessments, but his routine in Rome put some over the edge. The punishment-loving types would like to see Kyrgios thrown in a boot camp for a few months, but they'd settle for a Draconian six-month ban from tennis. Basketball announcer Dick Vitale, suffering from Kyrgios Derangement Syndrome, tweeted, “Tennis should suspend him big time.”

Suspend the guy the Big Three of tennis all worry about playing because he threw a chair? Kyrgios gets under people's skin, but he’s been sufficiently punished already. In addition to a $30,000 fine, he had to pay back his hospitality costs for the tournament and forfeit $40,000 in prize money.

The masochists want him to hurt, but Nick Kyrgios is already suffering. He said on the podcast that pro tennis has driven him to places so dark that he can't even talk about it, for fear his parents would hear it. That sounded like a cry for help to me.