It’s a path for other prospects to consider. 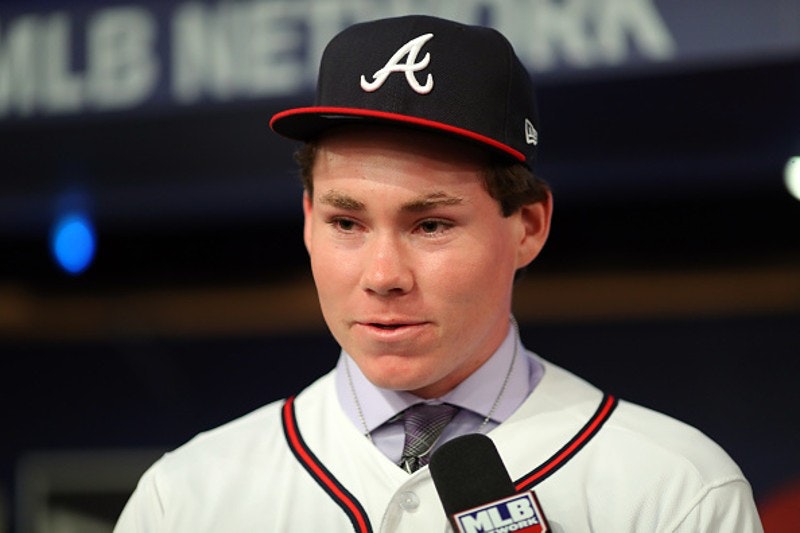 A 19-year-old community college student might be what it takes to change the MLB Draft landscape forever.

East Florida State College pitcher Carter Stewart, a Scott Boras client, shocked baseball fans last Tuesday night when the news broke that he’d skip this year’s MLB Draft and instead sign a pro contract with the Japanese Pacific League's Fukuoka SoftBank Hawks. ESPN’s Jeff Passan reports he agreed to a six-year deal worth more than $7 million. It’s the amount he demanded from the Atlanta Braves last year for a signing bonus when he was the eighth overall pick in the MLB Draft. However, Stewart had a wrist injury, and the Braves passed on signing him.

Although his path now is unconventional, it could prove a brilliant move in the long run. There’s no guarantee Stewart would’ve been drafted as high as he was last year or come remotely close to the money he desired. Looking at a handful of MLB mock drafts on credible sites like ESPN and CBS Sports, he wasn’t a projected first round pick. MLB.com ranked him 59th on their top-100 prospects list, meaning he likely would’ve been a second round pick.

Say he was a second round pick; the projected signing bonus slot value would be less than $2 million and declines with every pick number. If Stewart then signed with an MLB team, he wouldn't receive any serious money other than his signing bonus; minor leaguers are considered seasonal employees and are paid below minimum wage, for the most part. It's something MLB has spent millions of dollars lobbying Congress to ensure; the Save America's Pastime Act appeared on the 1967th page of the atrocious Omnibus Spending bill in March 2018, ensuring Minor Leaguers won't have to be paid a living wage for years to come.

And Stewart’s chances of making it to the big leagues weren't great either. There are many media reports saying he’ll be eligible to sign with an MLB team as an international free agent by the time he is 25 when his Japanese Pacific League contract is up. There could be some money there, but even if not, it's still a worthwhile gamble. The Society For American Baseball Research (SABR) shows the odds for someone drafted outside of the first round of the MLB Draft to make it to the big leagues aren’t a given. Following the 2016 season, they examined data from the 1996 to 2011 MLB Drafts and found that less than half of the second round picks who signed (49.4 percent) had made it to the big leagues. In subsequent rounds, the odds deteriorated further. And even among those second round picks, just 31.5 percent of them played three seasons or more in the majors.

If Stewart wasn’t viewed as a first round talent, he could’ve stayed in school as an indentured servant to the NCAA, but it's possible he never would’ve been picked as high as he was in 2018 again. He might’ve wound up working as an AAU coach. Instead, he took the guaranteed money and won't have to eat fast food every day with the rest of the minor leaguers.

Previously, sending top prospects to Japan used to be a threat from Scott Boras. He claimed he was looking into it while negotiating a contract for Stephen Strasburg following the 2009 MLB Draft, according to MLB Daily Dish; he made the same threat in 1991 after the New York Yankees drafted Brien Taylor—who never made it to the big leagues. Perhaps in the past it was used as leverage, but it could present some players with a real opportunity to make better money.

If Stewart could become a millionaire by playing in Japan, there’s an opportunity for more highly-touted prospects as well. Maybe the Korean Baseball Organization could be an option as well. After all, their rosters are loaded with washed up former big leaguers who are paid handsomely. There are nativist policies which limit teams to only having three foreign players who can only make up to $1 million per season as a first-year player. It might be bigoted of the league, but that hasn’t stopped former Red Sox prospects like Casey Kelly ($1 million), Justin Haley ($900,000) and Jeremy Hazelbaker ($700,000 plus a $200,000 signing bonus) from earning decent salaries in the KBO. It's surprising it took this long for an American-born amateur baseball player to capitalize on the global market.