How are fans expected to root for someone who hates liberals? 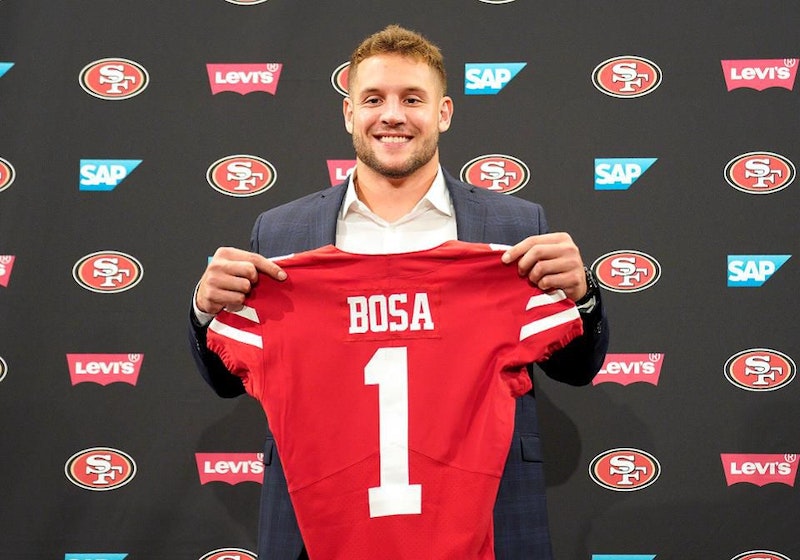 Last Thursday, I threw a traditional NFL draft party with the usual football drinks and snacks. I'd just poured my fellow 49ers fans a round of Baker Lane Sonoma Coast Cuvée Syrah when our team used its number two pick in the first round to take Ohio State defensive end, Nick Bosa. One of my guests, a developer for Buycott (an app that lets you scan barcodes to learn if products are made with illegal labor, animal testing, or other unethical methods) drained his entire glass of cuvée in one gulp before pushing aside his plate of truffle fries. He'd lost his appetite. Seriously, Trump-loving Nick Bosa? Who's running the Niners’ front office these days, Seb Gorka?

Do football fans telling me that Bosa’s a top-notch edge rusher know that he once tweeted Beyoncé's music is “complete trash”? Don’t they realize that the Queen Princess of R&B, who at any moment could ascend into the empyrean, is the first musical artist to be infallible and beyond criticism? While I've never actually listened to it, Lemonade is certainly the most important album of this millennium. Just looking at Anne Hathaway's reverent Instagram post on the earth-shaking album gives me the chills. Like Anne said, “It changed so many games,” yet a cis white male feels free to question her luminescent talent? Bosa knew his privilege would prevail in the end and that he could still have a career after that tweet.

An insensitive critic once offered a mild critique of Queen Bee and was, rightfully, never allowed to work again. How dare a Lilliputian suggest that the great diva sometimes skirts close to performing a burlesque of cultural appropriation or question her feminist credentials because she offers no definitive resolutions for the patriarchy. One has to wonder if Bosa is similarly dismissive of all black femme feminists. Sports journalists have an obligation to ask him this sort of question in post-game interviews, but the primitive jock sniffers will stick to questions like, “How did it feel to tackle Tom Brady”?

I'm not one of those “What would Bill Belichick do?” kind of guys when it comes to the draft. We're talking about San Francisco, a hive of advanced social consciousness. Let those beer-swilling white supremacist barbarians in Southie focus exclusively on how many sacks and hurries a player will deliver on the field because “it's all about football.” Here on Russian Hill we demand a little more than superior talent.

I had a hard time getting any football stats on Bosa because a Google search returned article after article on the three offensive tweets that he's since deleted. At least the media has its priorities straight, but eventually I was able to find out that he's a highly “coveted” football player. I get that that's a positive, but this guy once tweeted that Colin Kaepernick is a “clown.” Okay, Kap regularly threw short passes into the turf in front of receivers or 10 yards over their heads, and he couldn't read a defense to save his life, but he's one of the wokest players ever to pull on jockstrap on in the NFL. There's a reason why a number of top celebrities have compared the kneeling QB to Muhammed Ali and Martin Luther King.

And let's not forget that Bosa also tweeted that Black Panther “is the worst Marvel movie.” While I've not seen it, nor any other Marvel movie, I think it's obvious that Black Panther challenges Trump-era notions of exclusionism and can’t be disrespected like this. To berate a film that Spike Lee has said made him look at the world differently suggests that Bosa refuses to show the mandatory respect towards the cultural artifacts that the Hollywood crowd has designated as sacred cows.

No vetting of a draft pick’s complete until a thorough check has been done of his social media “likes” when he was a teenager. Bosa once liked a tweet that said, “Liberals really suck,” and another one saying, “Don't let college liberals wussify you. It's their goal. All of them.” He also hit the like button for a tweet calling Colin Kaepernick “crappernick.”

I wish AOC would weigh in. She worked hard to turn down all those Amazon jobs in Long Island City, so she’d understand our concerns. While she didn't tweet about the over 300 people killed on Easter in Sri Lanka, Bosa's “like” history regarding liberals on Twitter and Instagram is not something that our new leader should let stand.

Bosa may have expert hands and ingenious moves, but he feels Trump has “charisma,” which isn't acceptable talk in the Bay Area. Plus, he's certain to have a bad influence in the locker room, even though the 49ers front office is claiming that its vetting process has determined that he's a great teammate. The players will be talking about Beyoncé or Black Panther or how much they miss Kap after a win and Mr. MAGA's going to try to steer the conversation to his love for Dave Matthews and American Pie? That'll go over well.

The 49ers front office must be aware that our diversity is our strength, and I don't mean diversity of opinion. Nick Bosa's about as diverse as The Brady Bunch. He sure ruined my draft party.