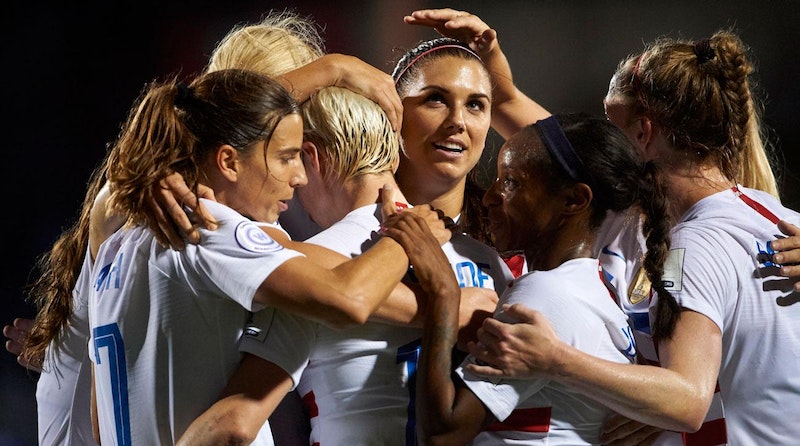 The U.S. women's national team has a chance to win its fourth World Cup this summer. Even so, their fight to be paid the same as the men's team continues.

In March, 28 players from the women's team filed a discrimination lawsuit against U.S. Soccer, arguing the disparity in pay for their team and the men's team violated the Equal Pay Act and Title VII of the Civil Rights Act of 1964. Title VII, “prohibits employment discrimination based on race, color, religion, sex and national origin.”

Many politicians including Democratic Senators Chuck Schumer, Kamala Harris, Kirsten Gillibrand and Elizabeth Warren have called for legislation to fix the disparity and Counselor to the President Kellyanne Conway has also voiced her support. Not everyone is in agreement that the women should be paid more though, and those who don’t agree often miss the point.

The men's and women's national teams are governed by the United States Soccer Federation, a 501c3 nonprofit which, for some reason, has accrued a $150 million budget surplus, as ESPN points out. According to its official website, its mission statement is "clear and simple"—and it’s not to make as much money as possible. Rather, it is "to make soccer, in all its forms, a preeminent sport in the United States and to continue the development of soccer at all recreational and competitive levels." That’s exactly what both sides do: they train hard and play soccer games to promote the sport.

Profitability is not the concern for U.S. Soccer. It's about promoting the world’s most popular sport. It's a cheap to practice and play and there are a host of benefits to having children and teenagers play sports.

A 2014 University of Kansas study found athletes were more likely to graduate high school in the state than non-athletes (98 percent vs. 90 percent); student athletes are also less likely to use drugs or use tobacco, according to the Women's Sports Foundation. Teamwork, self-discipline, exercise and improving social skills are also benefits.

This is the aim of the federation: to inspire future generations of soccer players. If one wants to argue the men would beat the women in a game, so be it. It doesn’t matter that the women lost 5-2 to the FC Dallas U-15 boys academy team in 2017 or if the Australian women’s team got whooped by a team of teenage boys. Nor is it relevant that the men’s World Cup draws more viewers worldwide than the women’s (3.6 billion for the men in 2014 vs. 764 million for the women in 2015). And the $4 billion in worldwide revenue amassed by the 2010 Men’s World Cup trouncing the $73 million the women’s World Cup amassed one year later is a moot point as well. That has nothing to do with the mission statement.

Men and women are biologically different, and this was an accepted fact up until the past few years. Even though men are, on average, bigger and better athletes, that doesn’t mean women shouldn’t play soccer. It’s good for both genders to compete in sports and be rewarded for promoting the game. What the women’s side is doing is especially important because some of the most popular spectator sports in the United States—like baseball and football—are male-dominated, so offering increased exposure to a sport which is feasible for girls to play is a positive.

And the women’s team does give the sport of soccer a great deal of exposure stateside. Forget the worldwide ratings. Ignore the men in Iran who can’t look at a woman unless she’s hidden in a niqab. That’s not the point of the US Soccer Federation, nor is it their target audience. However, the women’s World Cup championship finals win over Japan in 2015 averaged 25.4 million domestic viewers, making it the most-watched soccer game in U.S. history. It ousted the 18.7 million who, on average, watched the men play Portugal in a World Cup game the year before, according to Sports Illustrated. This kind of exposure inspires children to pursue sports; my colleague Nathan Rollins recently interviewed Sam Mewis of the women’s national team and she said the women’s World Cup win in 1999 made it her dream to one day play at that level.

Surely, those who are against pay equity for the women’s team are in part motivated by their desire to dunk on the “wage gap” whenever possible. And while it’s true that the gender wage gap is exaggerated by those who look at the uncontrolled gap ($0.79) as opposed to the controlled gap ($0.98), two groups serving as ambassadors of a sport for a nonprofit organization shouldn’t be treated the same since this is blatant pay discrimination for the same job.

Men and women players have an important role in promoting soccer—and both draw attention to the sport. They both deserve respect for what they’ve done; and in the case of the women, the appreciation should come in the form of a pay raise.