Stuck Inside of Boston, With the Lackey Blues Again

Will John Lackey finally be traded? Let's hope not. 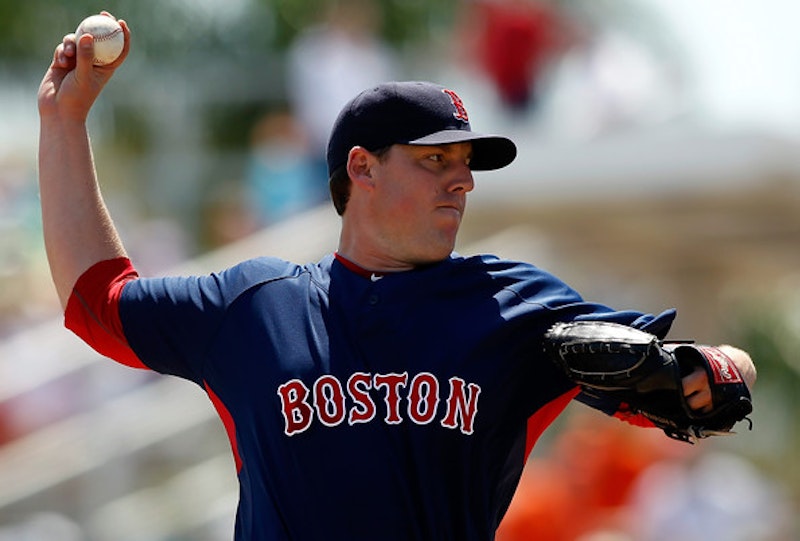 Amidst the Theo Epstein/Chicago Cubs compensation drama, rumors are floating around about possible trade destinations for aging contract albatross John Lackey. Once a well above average pitcher, Lackey has spectacularly fallen out of favor with Boston’s front office and fan base. Some analysts have suggested that a departure from Boston is long overdue (aside from miserable pitching, there’s his association with the chicken and beer clubhouse dawdlers), and if another team would take him, no matter the amount of money that would need to be chipped in, the Sox should jump at the offer.

But why? Most Sox fans point to his atrocious 6.41 ERA and end the discussion with that. If that’s not convincing enough, they say that he only pitched 160 innings in 2011. And to shore up their argument, most would reference the fact that he’s divorcing his wife, who is in the middle of a battle with breast cancer.

Lackey’s stock is at an all time low. Actually, he is one of the least valuable players in baseball. But opposing teams are still interested. That should be a clue for rookie GM Ben Cherington to keep the righty, at least for now.

While Lackey has been noticeably bad, he’s also run into quite a bit of rotten luck. His BABiP’s in 2010 and 2011 were an astoundingly high .319 and .339, respectively. Those last two years have inflated his career average to .295, which is a more reasonable number. Take into account his aggregate 5.7 WAR as a Red Sox, and you can see why I have hope for 2012. A return to his 2007 form isn’t likely, but the hurler could realistically carry a below 4.00 ERA throughout the season, averaging a strong amount of innings per game.

Regardless, Boston’s front office might want to make an example out of him. On the trade front, there are two options: send him to team along with a mountain of cash, and receive a resin bag in return, or swap him for another bad contract. The second option is the more appealing one, but as often as they’re proposed, lousy contract swaps don’t happen too often.

There are many reasons for that: mainly, it’s almost pointless to trade trash for trash. Still, it does happen, and if the Red Sox decide to go that route, they have a few options.

Alfonso Soriano, Barry Zito, and Vernon Wells shouldn’t even be in the conversation. They are terrible. Terrible. The Boston Globe’s atrocious reporter/analyst Nick Cafardo likes the idea of Zito heading to Boston; an obvious sign that it’s the wrong deal to make. Two White Sox players, Adam Dunn and Alex Rios, match up well with Lackey on money, though. Both Southsiders had disappointing seasons, even more disappointing than Lackluster, evidenced by their negative WAR’s. While Rios has put together a few decent seasons, he’s never been a very good player. I’d pass on him. Dunn has far more upside, but showed no signs of life at the plate throughout the entire year, which is very discouraging. It could be the transition to the AL, bad luck, or injury, but there’s a huge chance that he’s simply lost the ability to hit. That’s a risk I’d advise no team to take.

Those two guys are Boston’s best available options. That’s why I think they should stick with Lackey. If the righty loses some weight and conditions himself better this offseason, with a bit of luck, he could put together a fine, redeeming season in Boston.