It's the pitching, stupid. 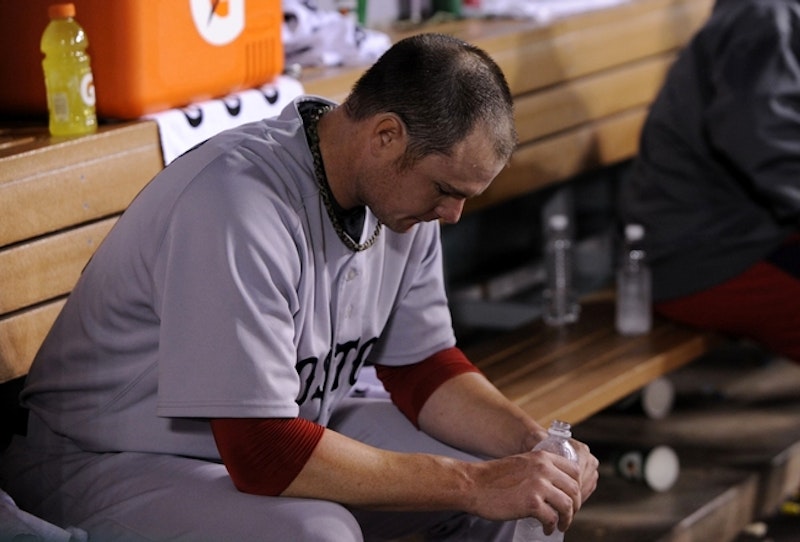 The headlines out of Boston have been coming fast and furious since the Red Sox were eliminated from the playoffs on the last day of the regular season. A well-respected manager was kicked to the curb, the franchise-altering, curse-busting, boy wonder GM is on his way out the door, and tales of possible clubhouse drunkenness have clouded the perception of the Red Sox 2011 season. Boston amazingly went from the presumptive American League pennant winner to a full-blown clusterfuck in about 30 days.

The conclusion to the Red Sox season was certainly disappointing. The offseason acquisitions of Carl Crawford and Adrian Gonzalez sent the Sox stock soaring and they seemed destined for an October matchup with the pitching-rich Phillies. The 7-20 September collapse should draw the angst and ire of the fan base but the vitriol and muckraking that has been flying out of Beantown is despicable. Boston fans can’t accept the fact that the Red Sox just weren't good enough. Or, heaven forbid, Tampa Bay was simply a better team. The desperate search for a scapegoat does a disservice to the other American League teams as well as the real reason Boston's season collapsed.

Beer drinking, buckets of fried chicken and clubhouse Madden tournaments would never have become an issue had the Red Sox starting pitching not completely fallen apart. The Red Sox were running out rookie Kyle Weiland to start must-win September games. GM Theo Epstein declined to pay the price to acquire Doug Fister from Seattle and instead opted for a cheaper option in Erik Bedard. In his eight Boston starts Bedard pitched a combined 38 innings, less than five innings per start. The failures of Bedard and Weiland put a strain on the bullpen and the team simply could not pull out of the tailspin. It didn't help matters when Jon Lester struggled and John Lackey continued his staggering decline since inking his massive free agent deal.

In case you've forgotten, the Red Sox won 90 games in 2011. That's a lot of wins. In fact, despite collapsing and missing the playoffs, Boston tied Milwaukee for the eighth best record in baseball. If you take a glance at some of the Red Sox message boards you'd think that the team lost 100 games or hadn't made the playoffs in 10 years. The reputation of two-time World Series Champion Terry Francona has been publicly besmirched. Fans have run wild with their contempt for Francona and Epstein. Sure, Epstein failed to get a reliable starter at the deadline, but he's also the guy that broke the supposed curse of the Bambino and put together the team that won 90 games this season. Epstein and Francona, the men who ended Boston's 86-year championship drought and exorcised the ghosts from Fenway, are being demonized when they should be celebrated. It's a shame for them, but it could be a regrettable disaster for the Red Sox organization. Given the way Boston has handled this mess they shouldn't expect any sympathy.