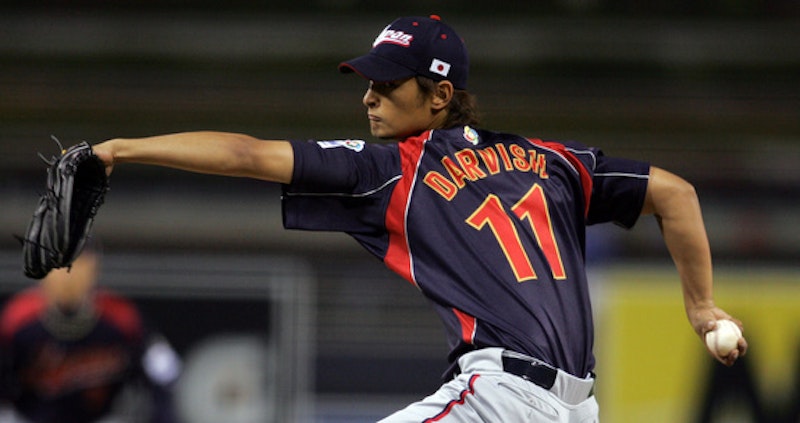 Three potentially available pitchers this offseason are considered “aces.” CC Sabathia (who is a lock to opt out of his current contract), Yu Darvish (who may or may not be posted by the Nippon Ham Fighters this winter), and CJ Wilson (the only hurler mentioned who’s definitely headed for free agency). All pitchers carry risks, from 18-year-old prospects to 49-year-old Jamie Moyer, and it’s always a gamble committing a large amount of money to one.

Sabathia, the oldest of the three, has the best track record by far. Simply looking at the stats, he’s a guy you want on the mound every day. But when his weight, innings total, and asking price are taken into consideration, it’s no wonder why the Yankees are wary of handing the man a seven-year contract. The Rangers’ Wilson pitched nearly as well as his Yankee counterpart this season, and in the hitters’ haven of Arlington, to boot. The lefty only has two productive seasons as a starter in his career, though, so he’s not necessarily a guy that’s a lock to perform well.

Darvish, a Japanese phenom, presents the most upside of the group. He pitched to a 1.44 ERA through 232 innings in the NPB this year, and is only 25. Foreign imports, especially ones that have passed prospect status, don’t generally do well in the majors, however. Jose Contreras, Daisuke Matsuzaka, and Kei Igawa are just a few examples.

While all three of these hurlers had fantastic 2011’s, it’s more than likely that at least one of them will falter after signing a large contract. Darvish himself will only warrant about $75 million over five years, but his posting fee will push the dollar total well over 100 million. In 2007, the Red Sox spent $51,111,111 million for the rights to speak with Matsuzaka, who subsequently signed for $52 million. Since the investment flopped for the team, some analysts are expecting executives to be cautious of bidding too high on Darvish. But did the failure of Alfonso Soriano or Vernon Wells stop the Nationals from inking Jayson Werth to an identical contract?

A precedent has been set for big name posting fees, and sportswriters are crazy if they think $35 million will win it. Darvish could potentially lead a rotation for many years to come, and that’s enough to tantalize any GM. Young aces are hard to come by. Guys like Felix Hernandez and Clayton Kershaw aren’t generally up for auction. Nobody knows how the righty will transition to MLB, but what people don’t realize is that signing C.J. Wilson or CC Sabathia is just as risky. Darvish has consistently blown away hitters as a starter, and has no present injury history, which is more than Wilson can say. Sabathia is currently the better player, but he is also much older and more expensive.

Because of Matsuzaka, fans and writers are already treating Darvish as a bust, while not realizing that investing in current MLB stars can be just as risky.