Tons of money and some odd choices from the Washington Nationals. 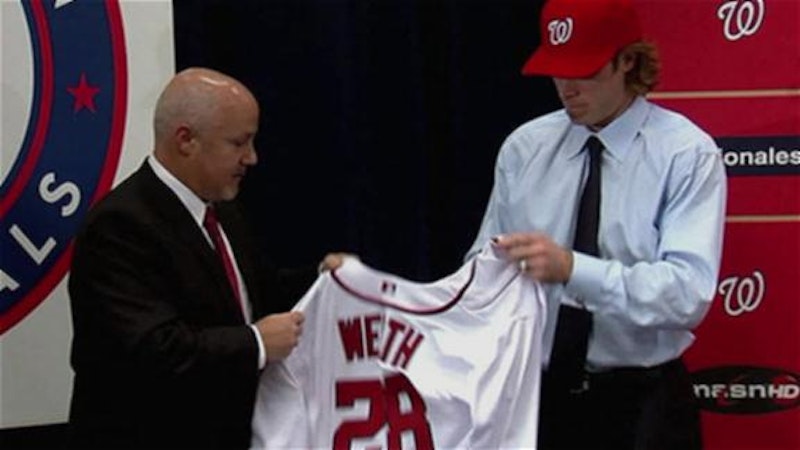 The Washington Nationals shocked the baseball world earlier this month by signing free agent outfielder Jayson Werth to a staggering seven-year $126 million contract. They undoubtedly also shocked their fan base, accounting department, and Werth's credit union. The contract figures to be a financial albatross, especially when you consider that Werth will play most of the 2018 season at age 39 while earning nearly $20 million. Still, that the team's ownership opened the vault for Werth should give Nats fans (all five of them) some hope for the future. Whether on-field results follow is questionable.

The Nats’ decision to spend superstar dollars for a pretty good player is even more puzzling when you consider some of the team's other recent moves. Prior to the trade deadline in July there was wild speculation that Washington would deal slugging first baseman, and pending free agent, Adam Dunn to a contender. They ultimately held onto Dunn, stating that the hope was to re-sign him to a long-term deal. Dunn signed with the White Sox as a free agent in early December for $56 million over four years. That's not chump change, but it pales in comparison to Werth's deal; just as Werth's 120 career homers pale in comparison to Dunn's 354. While Werth is a better defender than Dunn, he's also six months older and nowhere near as productive.

If choosing Werth at twice the price over Dunn wasn't strange enough, the Nats made another odd decision last Thursday in dealing left fielder Josh Willingham to Oakland for two prospects. Willingham made $4.6 million last year and figured to get a raise in arbitration. The team likely dealt him to free up some payroll space to chase a free agent pitcher and first basemen. Look at Willingham's career numbers and they’re remarkably similar to Werth's, right down to their birthdates. If Washington had simply signed Dunn rather than Werth they'd have plenty of room for Willingham and a veteran hurler. In essence the Nats traded Dunn and Willingham for Werth and lost about $60 million of long-term payroll flexibility in the process.

The team still needs to go out and sign a first baseman to take Dunn's place and also lack a reliable center fielder or a pitcher to take up the 200 innings or so that was lost when Stephen Strasburg went under the knife. I don't get it. I'm all for teams bucking up and paying the price for a superstar. Jayson Werth isn't a superstar. He's a pretty good player right now who's likely to begin declining in the next couple of years. The Nationals would have been much better off throwing those dollars at a real difference-maker like Carl Crawford or Cliff Lee rather than Werth.

In other head-scratching DC sports news, the Redskins have benched the recently re-signed Donovan McNabb in favor of human turnover machine Rex Grossman. I'm by no means a Skins fan. As a kid growing up in Baltimore—post-Colts and pre-Ravens—I hated having the Deadskins rammed down our throats every Sunday. I despised former owner Jack Kent Cooke for blocking Baltimore's efforts to attract a new team. Now in my mid-30s I have nothing but pity for the once proud burgundy and gold. The hiring of Mike Shanahan and trade for McNabb gave the illusion that perhaps maybe the Skins were finally on the right path; less than 12 months later it now looks like business as usual. Another season up in flames, inventing new embarrassing ways to lose, and another off-season searching for an answer at QB. I'd wish them luck, but I wouldn't mean it.