Sports And Politics Are Inextricably Linked, Except When They're Not

Dan Le Batard gets pushed out the door at the new, apolitical ESPN. 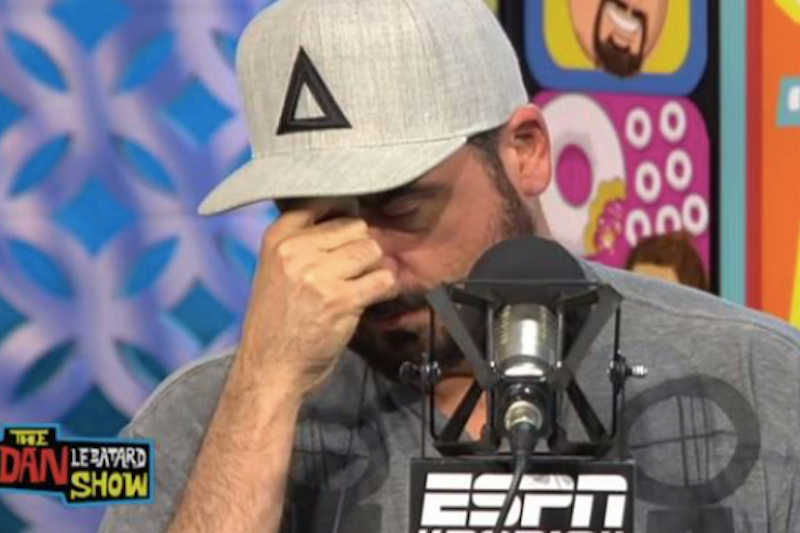 After an extended estrangement, the fraught relationship between ESPN radio- and television-show host Dan Le Batard is coming to an end on January 4, when he will deliver his last episode of Highly Questionable, his TV show. The divorce was political in nature; Donald Trump played a central role.

The outspoken Le Batard had always been a handful during his two decades with the sports network, but the seed of his eventual demise was planted the day Trump was elected. In time, the Cuban-American sports talker felt morally obligated to speak out against the president he despised, even when there was no connection to sports, violating his employer's "no pure politics" rule. Under this directive, it was fine to comment on Trump calling former NFL player Colin Kaepernick a "son of a bitch," but offering an opinion about Trump's "very fine people on both sides" observation on the Charlottesville white nationalist rally was out of bounds.

The "no pure politics" edict came from Jimmy Pitaro, who replaced John Skipper at the helm of ESPN in March, 2018, and was determined to rid the network of its left-leaning image, which he felt was destroying the network's ratings. Le Batard, who didn't have to worry about ratings in the general sense, had other ideas. In July of 2018, he issued a pointed rebuke to Trump for telling Congresswoman Ilhan Omar to "go back and help fix the totally broken and crime infested place" she came from—Somalia. Sharing this opinion was an open challenge to Pitaro's authority. His boss wasn’t pleased.

Something regrettable Le Batard did this August provided a clear window into his self-righteous political mind. He ran a poll after Orlando Magic forward Jonathan Isaac, who's black, had torn his ACL shortly after standing (for religious reasons, he said) for the national anthem while his teammates were kneeling to show solidarity with the BLM movement. The poll question was: "Is it funny the guy who refused to kneel immediately blew out his knee?" Only when the outcry came did the ESPN host reevaluate his crass "joke" and apologize.

Fox Sports radio host Clay Travis, not a fan of Le Batard's "woke sports" approach tweeted: "New ESPN president Jimmy Pitaro is systemically wiping out pretty much every vestige of woke sports on the network. It’s a smart move because woke sports doesn’t rate and never has." In response, Le Batard called Travis "hateful," although Travis, who once worked for Al Gore's campaign, has never expressed any racial hatred, which is what Le Batard was implying. But speaking of "hateful," Travis never implied he thought it was funny that a black athlete blew out his knee. In my experience, that's an area where progressives find humor, as when North Korea arrested UVA student Otto Warmbier in 2015 for petty theft and people like Comedy Central host Larry Wilmore found hilarity in his extreme pain, which would eventually lead to his death.

Travis knows what Pitaro does—that the vast majority of sports fans don’t care for the “woke sports" angle, thus it's bad for business. When they want political commentary, they tune into their favorite cable network, but when sports fans want to escape politics they go to ESPN. Le Batard interprets Pitaro's aversion to pure politics on the air as an indication that his boss lacks "the stomach for that fight.” But Pitaro, regardless of his own politics, doesn't see his job as head of a sports network as being a leader in the fight for social justice, and neither do his bosses at Disney. At least half of ESPN's potential viewers and listeners, after all, are Republicans.

Jimmy Traina wrote this for Sports Illustrated: "Things between ESPN and Le Batard always seemed bumpy, though, which never seemed to make sense given Le Batard's popularity. You'd think ESPN would value someone with such a loyal following, but instead, the network gave the impression it was nervous about Le Batard being a wild card."

It's as if the writer had tapped into Le Batard's thought process, which was, "I'm too popular to be held to the new rules." Add to that, "I'm on the right side of history, so back off, boss." But Pitaro, who knew his credibility as a leader was at stake, called his subordinate on the carpet when Le Batard implied that his boss was a coward during his diatribe over Trump's comments on Ilhan Omar.

Many have argued that Le Batard has "said nothing wrong," a naive opinion based on the false assumption that corporate rules are a reflection of a moral point of view. There's something about TV and radio sports commentators that makes them confident that people want to hear their political opinions, even when they have nothing to do with sports. Food Network hosts, for example, don't do that. Perhaps they have more humility than their puffed-up sports counterparts, and they understand why people tune in to them, which is often to escape from politics. What's surprising is that it took a major corporation like Disney so long to figure out that it's bad business to allow on-air talent free rein in political commentary, so long as it's left-leaning. It's no travesty of justice—no tragedy—that Dan Le Batard is leaving ESPN under a cloud. His sizable fan base will follow him wherever he ends up.