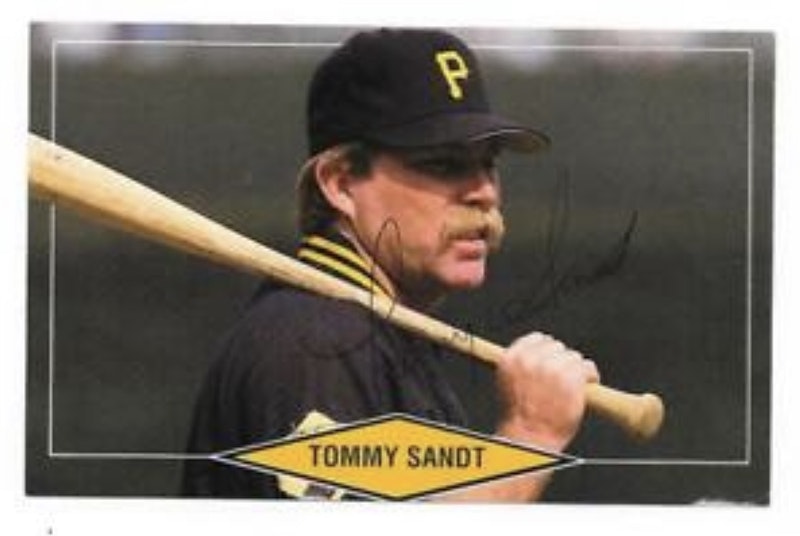 Tommy Sandt was a baseball icon in so many ways, but the most noticeable was probably his walrus-style mustache and his years as the Pirates first base coach under the reign of manager Jim Leyland. He just screamed old school. Sandt was the real-life manifestation of James Gannon’s coaching character in the film Major League (known for his line “Give him the heater, Ricky”).

The early-1990s Pirates were a team of old-school characters mixed with new-school yahoos who’d soon take steroids and ruin their Hall of Fame legacy. If Barry Bonds had paid more attention to Leyland and Sandt, he’d be enshrined at Cooperstown as we speak. Sandt, 69, died in Oregon on Dec. 1 and Bucco fans everywhere had to feel a punch in the gut. As of this writing, no cause of death had been cited.

Sandt played two seasons in the mid-1970s for the Oakland A’s as a somewhat useful middle infielder who never caught on. He’d manage the Buffalo Bisons eventually and make some noise as player/coach with the Portland Oregon Beavers. On television, he was in the background of so many Andy Van Slyke, Bobby Bonilla and Jay Bell singles, grabbing a shoulder, occupying their ears with first-base coach advice. He had his share of umpire disputes, which is an occupational hazard. He played the supporting actor role in manager Lloyd McClendon’s grandiose display following the Jason Kendall out-at-first dispute with umpire Rick Reed. That’s the famous incident when Lloyd, after rifling his Bucco cap to the ground, seized the first base bag, uprooted it from its moorings, and then marched back to his dugout having been ejected by Reed several minutes earlier. It was one of the first memorable moments of the newly christened PNC Park in Pittsburgh, a long-awaited architectural and cultural triumph that was quelled somewhat by Pirates Hall of Famer Willie Stargell dying on the day the park opened. It was also my birthday, and the first time I learned of a major death via the Internet by turning on my computer that morning to be greeted by the Stargell death headline.

Sandt was a coaching constant for 21 years for the Pirates. He even managed in Hawaii when the Bucs impractically housed their AAA team in Honolulu in the resort-strewn Pacific Coast League in 1984. Sandt told The Honolulu Register in 1985 that things were so bad during his minor league days that he and his wife had to give away their dachshund dog because they couldn’t afford to feed it. He was in class A Burlington, Iowa at the time. The headline should have been “Wayward Weiner Dog Waived” but I’m sure it wasn’t.

In March of 1989, the media-friendly Sandt did an amusing “Pirates Diary” column in The Pittsburgh Press and recalled as a young Oakland Athletic in 1976, he had to borrow someone’s white cleats which were their trademark. They were too small, and he soon had bad bleeding blisters. Manager Chuck Tanner noticed the stained cleats and Tommy’s resilience and Sandt ended up making the big club because of it, Tanner said. He became known for his humility and work ethic. I always paired him with third-base Gene Lamont, “Gentle Gene” I called him, in my memory of those robust early-90s Pirates squads. Injured in the Nolan Ryan vs. Robin Ventura beating. Would later manage some hapless Pirates teams.

Base coaches have been iconic for me since childhood. I've always valued the knowledge of their identities. My grade school years were full of Don Leppart and Bob Skinner. Later it was Al Monchak, a war veteran who lived to be 98 and died in the Buccos spring training home of Bradenton, FL, where I hope to spend my final years. I once took a very elegant woman from Berlin, Germany, to Yankee Stadium on a glorious summer Saturday during the Stump Merrill years. She’d never seen baseball. We met the night before at a party in Boerum Hill, Brooklyn and she was still wearing the same animal print underwear the next day. It was a nice hungover afternoon out in the Bronx. I asked her if she had any questions about the game. “Yes. Who are the fat guys standing on the field?” Oh, they’rethe base coaches, I said and then it took 20 minutes to explain their justification and their precise role in the dynamic of the contest. I concluded they’re an odd aspect of the game, but their ancillary identities can’t escape my obsessions at this point. We would somehow be lost without them.

I remember having a brief telephone conversation with Sandt in 1990. The Pirates were in New York to play the hated Mets. I was working as a reporter at a stalwart weekly paper in downtown Brooklyn called The Brooklyn Paper. The focus was “hyper-local” as dictated by the native-Brooklynite publisher—a mad newspaperman genius named Ed Weintrob. I was perusing my Pirates media guide during some downtime (of course) and noticed base coach Tommy Sandt’s birthplace was listed as Brooklyn, NY. Ahah! I bellowed, disturbing my co-worker Bonnie Pfister, herself a Pittsburgh native and the living version of Brenda Starr. We were pressured by the editors for at least six local stories per week.

It was early June and the Bucs had just swept the Cubs and were looking good in the NL East as they arrived for a four-game weekend at the dreadful Shea Stadium. I knew visiting MLB teams stayed at the Hyatt at Grand Central. So, I got on the Jimmy Breslin blower and called the hotel and asked to speak with a guest named Tommy Sandt. They put me through to his room. He answered the phone! I did a spit-take with my black coffee from a Court St. deli and stammered through an explanation for my call. I’m a slightly unprepared reporter at a weekly paper in Brooklyn and would like to talk to you about your life in our borough and childhood and baseball legacy no doubt linked to our famous Dodgers, etc.

Tommy listened, grunted a few times, then kindly replied that yes, he was in fact born in Brooklyn, but as an infant his family moved west and he actually grew up in California and was presently ensconced in Oregon and that he had no real 718 area code memories. He had absolutely no East Coast ties at all. Sorry, pal. I thanked him for his time and wished him luck against the hated Mets, which he probably thought was odd coming from a reporter in Brooklyn.

Sandt would get a World Series ring as he followed Leyland coaching for the 1997 Florida Marlins, so there’s some poetic justice here for the guy who set the standard for grizzled veteran coaches with bushy moustaches. Anyone of my generation recognizes this archetype and worships it in these days of gym-toned stat-obsessed coaching staffs who barely tolerate over-30 veterans and tend to flaunt their lack of professional playing time for all the wrong reasons. Guys like Sandt werewhitewashed as Moneyball villains. So be it. One has soul, the other doesn’t. Sandt’s final at-bat as a Major Leaguer was a strikeout looking on Oct. 3, 1976 against the mighty Nolan Ryanwho as an Angel would beat the A’s 1-0 that day with a two-hitter for his 17th win of the season. There were 9155 fans in the seats that day at a probably smelly Oakland-Alameda Coliseum.

Might as well go out against the best, Tommy boy. Rest in peace, and thanks for taking my call.