Opening Day predictions you can live with. 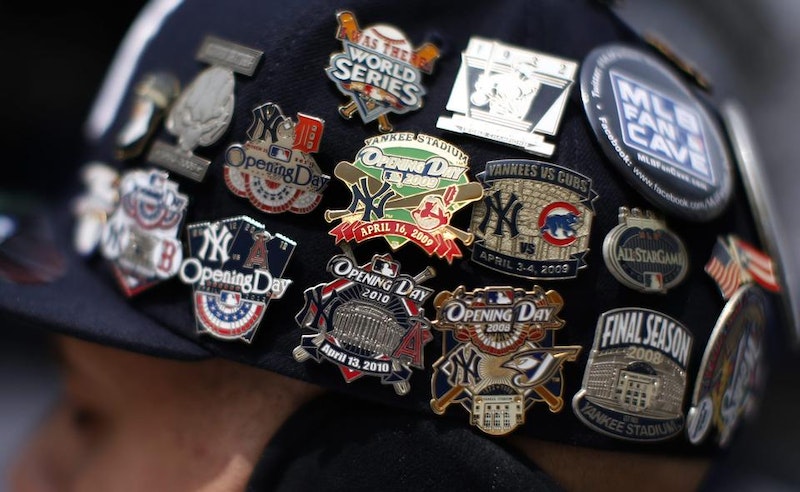 Opening Day. I once talked an entire newsroom at an afternoon daily in Wheeling, W.Va., into ordering hot dogs from a local Greek joint and we did the wave and one of the dowdy editors fell out of her chair and there were laughs aplenty.

Opening Day. I once sat alone in the upper deck of Yankee Stadium watching the Yankees beat the Royals in the snow. Bob Wickman had just replaced Andy Pettitte and promptly walked Keith Lockhart who for some reason was pinch-hitting for Joe Randa. I looked to my right and another shivering solo fan looked at me and we asked what they hell are we doing sitting in the snow watching Keith Lockhart draw a base-on-balls? The kid then put down his beer, stood up and walked to the exit ramp area and used his penknife to detach an official red-white-and-blue “bunting” banner before disappearing down the tunnel. Balls. I have always wanted some bunting. That same Opening Day—as a reward for fans sitting through the April blizzard—the Yankees offered a free ticket exchange to one of three future games. One of those freebie games was a May 14 contest against Seattle. I selected that one and therefore was sitting in that same upper deck as Doc Gooden threw a no-hitter against the no-slouch Mariners.

Opening Day. I once took a three-hour lunch on day two of a new job at a weekly paper in Brooklyn. The only place showing the Mets-Pirates tilt was the Waterfront Ale House on an otherwise abandoned Atlantic Ave. because the TV at the Long Island Restaurant was on the fritz. Bobby Bonilla, then a Pirate, almost cleared the scoreboard with a towering blast off of Jeff Innis to cap a rare Pittsburgh 12-2 rout of the Metropolitans at Shea.

Opening Day (which more often than not falls on my birthday) is—if you do the matrimonial math—precisely a nine-month growth cycle from the previous season’s All-Star Break. The report from Sydney, Australia, where the Dodgers and Diamondbacks secretly burned the midnight oil of the official 2014 season lidlifter last week, was the fans down under went all Mad Max on each other going for foul ball souvenirs landing in the stands of the old cricket ground. It was like a tanker truck filled with free horsehide in a baseball version of Bartertown. Let’s hope next year MLB’s “international” marketing geniuses have the Angels and Royals open the season in Reykjavik, Iceland so our greedy game can close in on the whole Bjork/Of Monsters and Men volcanic ash demographic.

With that in mind, here are my premature predictions not for the 2014 season but merely for its Opening Day (ignoring the annoying Dodgers game on Sunday night), which appropriately falls on the day before April Fool’s.

Cardinals at Reds: I open with the Reds because that is how the sport used to honor the first franchise. But this is an overdose of red right off the bat. Brandon Phillips does not like the Cardinals and he is not alone. Adam Wainwright should stick to folk singing. Johnny Cueto will never recover from his wild card loss in Pittsburgh last year. But the Reds win 10-9 in front of a Taftian home crowd bundled up in Bengals jerseys as bullpens implode and Billy Hamilton goes hitless but steals home.

Cubs at Pirates: Notre Dame football fans are still shaming Jeff Samardzija for choosing the Cubs over the NFL. His mullet was on the trading block, but there were no takers. The Buccos show off their Ralph Kiner memorial sleeve patches with an apropos power display from Pedro Alvarez, Travis Snider and Russell Martin for a 6-3 victory.

Braves at Brewers: The ghost of Birdie Tebbetts looks over the shoulder of Fredi Jesus Gonzalez whose Braves are banged up already. Cue the circus music as Milwaukee sets an Opening Day record for errors and Atlanta dominates 7-1.

Nationals at Mets: Stephen Strasburg and his Maginot Line of hairy guys from D.C. will again underperform and Dillon Gee will do his best Dave Mlicki-against-the-Yankees impression. (Who throws a complete game nine-hit shutout?) Mets fans go home smiling with their faded decades-old RC Cola tote bags after watching (and keeping score of) a 5-2 win at Citi Field.

Phillies at Rangers: Interleague play? What a novelty! Razorback Cliff Lee can’t get comfortable in Texas and doesn’t record an out for Philly, so he gets no post-game shaving cream pie from new teammate and fellow Arkansas native A.J. Burnett. Redneck czar Tanner Scheppers therefore wins by default in a 9-1 laugher that has the fans longing for Eagles vs Cowboys or at least a rerun of Jimmy Rollins’ appearance on MTV Cribs.

Rockies at Marlins: High ground against low ground as the EuroTrash techno club in left field unleashes a Speedo-borne Norovirus sickening the 3400 people in attendance. But the game goes on and Cuban star Jose Fernandez mows ‘em down until Drew Stubbs breaks up his no-hitter in the ninth as Miami cruises to a 4-0 win.

Giants at Diamondbacks: This game might as well be considered extended Spring Training for these NL West foes, meaning Bruce Bochy will once again get a chance to outmanage Kirk Gibson as the Giants win 5-4 in extra innings. Too bad Paul Goldschmidt gets injured in the first game and Arizona opens its bad news season at 0-3.

Royals at Tigers: Red Wings win in a shoot-out with Kid Rock in the stands. The frozen ruin of Comerica Park is instead used as a setting for Dennis Hopper and Christopher Walken to reenact Hopper’s brilliant death scene from True Romance.

Red Sox at Orioles: The defending World Champions glide into Camden Yards wondering when they became the Yankees and vice versa. Baltimore still awaits Buck Showalter’s secret weapons (the cloaking device from Star Trek?) and the Red Sox win 7-3 and retake first place while the O’s go hide in a boat in someone’s backyard.

Twins at White Sox: Minnesota is hosting the All-Star game this season, which is about the time Target Field will be thawed out. So in the last words of Bobby Kennedy, “It’s on to Chicago and let’s win there” which is just what Ron Gardenhire’s charges will do, issuing an 8-2 drubbing of President Obama’s team.

Blue Jays at Rays: Throwing a knuckleball in a windless environment has its drawbacks and R.A. Dickey will continue to suffer. It would be nice if the Rays would invite Toronto mayor Rob Ford to sing the Canadian national anthem, but that is highly unlikely. What is more likely is Evan Longoria going 5-for-5 in a 6-1 Tampa Bay victory.

Indians at Athletics: After the Malaysian jetliner is discovered in the Indian Ocean of foul territory in Oakland, the Chief Wahoo-less Tribe from Cleveland comes together for a gutsy victory. Sonny Gray loses the war of attrition by a 4-3 score in a classic American League snoozer.

Mariners at Angels: Go to this one and get a magnetic schedule and a chance to see Robinson Cano in new colors and King Felix dueling with that hippie brother of Jeff Weaver on the mound. Seattle wins 6-2 and vows to break last year’s record for frequent flier miles accrued by a franchise. Mike Scioscia becomes the first manager ejected in the 2014 campaign.

Yankees at Astros: Houston made a big deal of handily beating the Rangers on last season’s “Opening Night” on ESPN. It was one of just 51 victories for the Astros in 2013. This year, they manage their low expectations by allowing C.C. Sabathia to somehow keep the ball inside their bandbox yard as the Yankees prevail 7-4 in the opener. Meanwhile, nine miles due south of Minute Maid Park, the Astrodome—once considered the eighth wonder of the world—rots away in a shambles of mid-1960s muddled optimism.