Jed York and James Dolan are two of the worst. 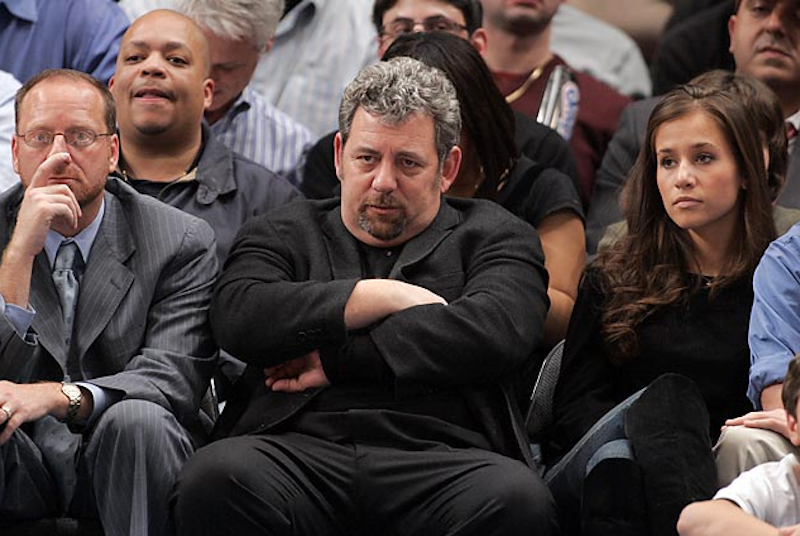 NBA and NFL sports franchises are very expensive toys. The average NBA team is now worth $634 million, so it's no surprise that 14 NBA owners are billionaires. Purchasing an NFL football team will set you back $1.17 billion, on average, and over half of the league's owners are billionaires. Even a laughingstock of a franchise like the Cleveland Browns is worth around a billion dollars.

If you root for pro sports teams, you want your team owners to be as rich as Croesus so they can acquire the best talent. If, however, the actual owners choose to let their child run your team, you should probably prepare for pain. This is what’s happened with two of my teams, and the results have been devastating. When team owner James Dolan looked on while security dragged the beloved former New York Knicks player Charles Oakley out of Madison Square Garden during last Wednesday's game, I was reminded of why I'd abandoned the team I’d followed so passionately for years. Widely despised in New York, Dolan only has his job because his billionaire father, Cablevision founder and owner of The Madison Square Garden Company, Charles Dolan, handed it to him. The symbolism of white rich kid Dolan standing by while cops cuffed a black guy who played a hard, blue-collar style of basketball was as depressing as it was inescapable.

San Francisco 49ers owner and CEO Jed York, also the beneficiary of nepotism, now runs my other team sports preoccupation. He's wrecked the Niners like Dolan wrecked the Knicks. Jed’s uncle, Eddie DeBartolo, Jr., whose father purchased the franchise for him for $13 million in 1977, stepped away from the Niners in 2000 after a Hall of Fame ownership tenure. Jed’s parents handed the team over to him in 2009. Last year, ESPN ranked all American sports franchises and placed the 49ers at the very bottom of the 122-team list.

Eddie DeBartolo, Jr. was an anomaly. Though he didn't exactly earn his position, he had a talent for putting great teams on the field. Gaffe-prone Jed didn't get his football DNA. He made one great move in hiring head coach Jim Harbaugh, but let him slip away. Then he hired two guys who each lasted one season. Among Jim Dolan’s bad tendencies is overpaying free agents, which he did most egregiously in past years with Allan Houston and Stephon Marbury. Bleacher Report did a comprehensive analysis of Dolan’s profligate ways and determined he'd squandered a grand total of $316 million on bad contracts. The Knicks went 32-50 last season for a reason.

So how do spoiled brats continue to run sports franchises in spite of their horrible results? Professional sports is a unique business. You're selling a product to loyal customers not inclined to purchase the competition's product regardless of how bad things get. Jed’s parents, Denise DeBartolo York and John York, know very well that 49ers fans aren't crossing the Bay Bridge for the Raiders, just as Charles Dolan knows that Knicks fans aren't switching to the Brooklyn Nets. They also know that huge TV revenues will flow no matter what the win-loss record is.

Over the past three seasons, the Knicks are 86-160, the 49ers are 15-33, but owners don't really get punished when their teams lose. The Knicks market value of $3 billion tops every other NBA team. The 49ers, also valued at $3 billion, are number four in the NFL. When Jed York took over in 2009, the 49ers were valued at only $875 million. In 2009, with Dolan running the Knicks, they were valued at $613 million. What incentive is there for the parents to fire them, even though they're generally considered two of the worst owners in all of sports?

Many Americans are addicted to sports, and the owners have the monopoly. Some do a good job and reward their fans. But they’re arrogant, knowing they have the power to convince cities to buy stadiums for them, or raise ticket prices even after a horrible season. They show their disdain for their fans when they let their children deliver loss after loss and don't make a change. Dallas Cowboys owner Jerry Jones, a former college football player, has a valuable sports franchise, but he wasn't handed anything. Look for the pain on his face when the Cowboys lose. Jed York and James Dolan don't burn for wins like that. They're not really sure why they're doing what they do, but the money's good, and so is the job security.