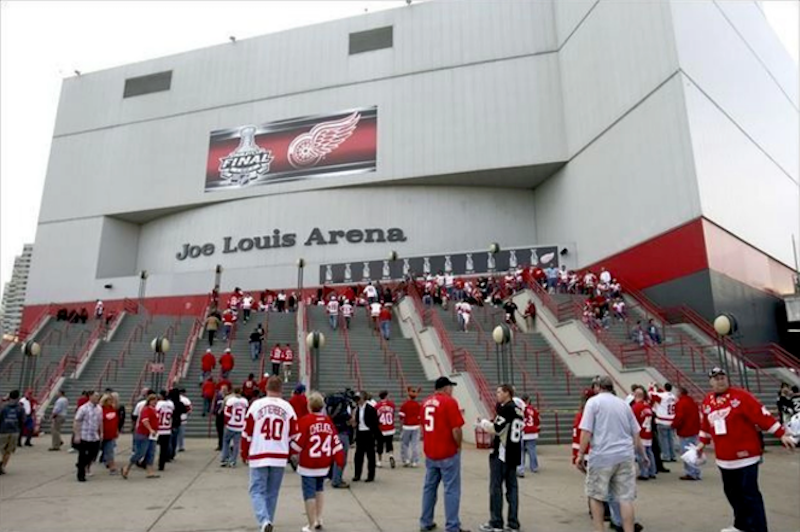 When my Washington Capitals went to Detroit last week and lost in a shootout to the Red Wings, The Washington Post’s hockey writer made a big deal about how the Capitals may be playing in Joe Louis Arena for the last time.

The Red Wings may not qualify for the playoffs, breaking the longest such streak at 25 among the four largest North American professional sports leagues. So this is likely the last time the NHL’s best team will visit the bulky gray building with no windows squeezed between a highway and the Detroit River. The Joe—19 Steve Yzerman Dr.—opened in 1979. The Red Wings will move downtown to a contemporary building that will anchor a large mixed-use development near Detroit’s other sports stadiums, Comerica Park and Ford Field. JLA will be demolished.

I grew up in Jackson, just 75 miles down I-94. I saw my first Joe Louis Arena event in that first season, when my father took me to see the Wings play the late, great Quebec Nordiques. My favorite Wings of that era are Reed Larson, with the big slapshot, and Jim Rutherford, the steady goalie. The Wings were mediocre back then, but would steadily improve, and in 1997 finally win their first Stanley Cup since 1955. Over the next few years, the Wings would win three more.

The NBA's Pistons, presently anchored in Oakland County, will share the nearly-complete downtown Detroit arena this fall, ensuring for one season at least that Detroit will be the only city with four major sports franchises whose arenas or playing fields fall within its “downtown.” As a fan of the Prince George’s County Redskins, that distinction matters.

The larger story is what all this means for a struggling city. Joe Louis Arena cost about $60 million to build. When you add the cost of $733 million arena to the cost of the rest of the new district, with what is coming in retail, offices, and housing, you get about $1.3 billion. About $250 million of that is from public bonds, to be paid back from ticketed revenues generated from events in the new district. The team’s owners, the Ilitch family, say public-private partnering is the key to leveraging such major, city-altering deals. Forbes reports the new sports and entertainment district is “is about to become the most compact and voluminous of its kind in America.”

The family’s head, Mike Ilitch, who died February 10, has been praised in Detroit, where the family has brought jobs, its Little Caesar’s Pizza headquarters, and contributed to universities and a major theater rehabilitation. (At Deadspin, however, attacking the dead is cool, and so here is one writer who hates Mike Ilitch. Go crazy.)

A few memories of The Joe:

July 1980, the arena hosted the Republican National Convention, which nominated Ronald Reagan. The theme of the convention was, and I’m not making this up, “Let’s Make American Great Again.”

In August 1980, boxer Thomas “The Hit Man” Hearns, who grew up in Detroit, won a world welterweight title bout at the arena four blocks from his home. He beat Pipino Cuevas of Mexico, who’d held the title for four years.

In January 1994, Tonya Harding won the U.S. Figure Skating Championship at The Joe. In June of that year, her title was taken, following revelations that Harding aided in covering up an attack two days before on her rival, Nancy Kerrigan. The attacker slammed Kerrigan’s leg with a police baton as she walked through a corridor at a practice rink next door to The Joe. Harding denied she knew anything about planning the attack, but admitted she helped cover it up. The assailant was hired by Harding’s ex-husband, who possesses one of those unfortunately unforgettable '90s names, Jeff Gillooly.

The arena also served as a home to all the major acts of the last several decades. I saw the final tour of the Police there in 1983. That show was postponed for one night after the band visited Tiger Stadium for a ballgame, and Sting came down with a soar throat. Or so went the story.

But my singular JLA memory came on March 23, 1985, when I drove down from Central Michigan University in Mount Pleasant, with a female friend on a cold, rainy night, to see this band everyone was talking about at the time called U2. I still have the ticket stub and the t-shirt. The show was the most memorable of my life. It was mystical and dream-like. This was before U2’s full-frontal leap into irony and then world-saving in the following decade. I remember the band allowed some guy on stage, who danced and waved a giant painting of Martin Luther King, Jr. It felt like a revival meeting.

Detroit always got public respect from the big touring bands as home to passionate music fans.  Its own music scene morphed and grew and gained wide attention over the decades. Detroit native Kid Rock will be the first performer in the new building. Then, a few days ago, The Joe hosted a three-hour speech by Louis Farrakhan. The Detroit News offered a singularly banal bit of stenography about the speech, which was filled with all the predictable paranoia, inanity and threats of violence. When Donald Trump denounced anti-Semitism Tuesday, it is too bad he didn’t find time to add a line or two to slam down this tiny tyrant’s endless shtick.

The President of the Detroit City Council spoke before Farrakhan, welcoming him to the city. Because of course she did. The city’s leadership has been dangerously negligent and corrupt and divisive, beginning in the early 1970s, when some basic competence was needed most. The city right now is attracting investment, three years after exiting bankruptcy. But through it all Detroit was always a great place to visit for a show or to see what became a great hockey team. For 38 years, The Joe, with its narrow concourses and troublesome location, was the center of it all.