Resting during the regular season. 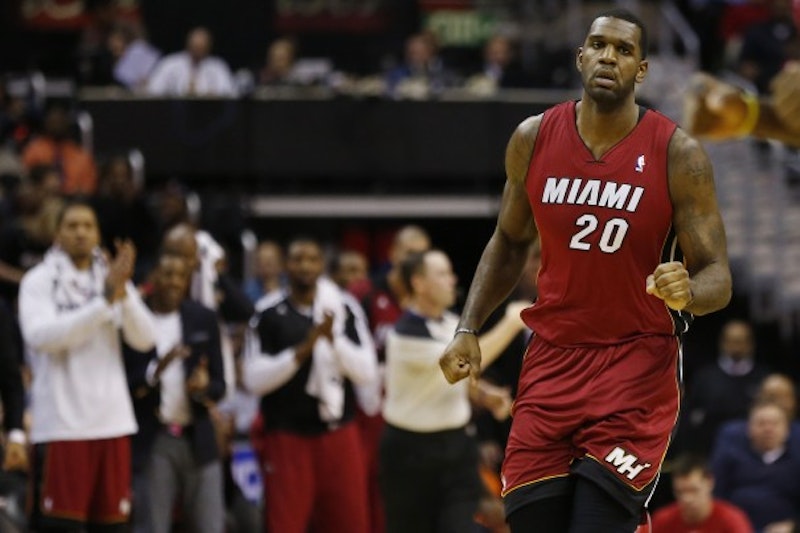 NBA detractors point to the league’s abundance of playoff teams, lengthy regular season, and deem the first 82 games as nothing more than an extended pre-season. San Antonio Spurs coach Gregg Popovich has repeatedly drawn the ire of fans, media, and the league office for frequently sitting his star-studded trio of Tim Duncan, Tony Parker, and Manu Ginobili. Erik Spoelstra, coach of the two-time defending champion Miami Heat, has taken the Popovich plan to new heights this season.

Miami is currently second in the Eastern Conference standings, three and a half games behind the Indiana Pacers. Miami is comfortably ahead of the third place Atlanta Hawks. The East is so weak that only four teams are currently over .500, with Toronto just barely qualifying. The aforementioned Atlanta Hawks (22-20) would miss the playoffs entirely if they were in the Western Conference. All signs point to Miami and Indiana set on a collision course in the Eastern Conference finals. The series would be a rematch of last summer’s seven-game series that saw Miami prevail.

The weakness of the Eastern Conference, and the near inevitability of another playoff tussle with the Pacers, has guided much of Miami’s strategy since the end of their most recent celebratory parade. Miami added low-risk, high-reward bench players in former lottery picks Michael Beasley and Greg Oden during the offseason. Neither move was met with much fanfare but both could pay dividends in the postseason. The presence of Beasley, originally by Miami in 2008, has given Spoelstra a dependable scorer off the bench to accompany Ray Allen. Beasley has provided a spark for the Heat averaging 9.0 points per game in just 16 minutes. Beasley also ranks fifth on the team in PER (player efficiency rating) at 17, ahead of starters Mario Chalmers and Shane Battier.

Oden made his long-awaited season debut last week and has been used sparingly in the early going. The former top pick of the Portland Trailblazers missed most of the past four seasons recovering from a myriad of knee injuries. Spoelstra has given Oden about seven minutes per night and hasn’t played him on back-to-back nights. Expect those trends to continue until we get closer to April. Miami signed Oden for one purpose, to offer some resistance to Indiana big man Roy Hibbert in the Eastern Conference Finals. Spoelstra must straddle the delicate line of prepping Oden to be a productive postseason player without pushing him too hard and risking injury.

Spoelstra is doing the same with Dwyane Wade and Ray Allen. Wade was recently named an Eastern Conference starter for the All Star Game despite missing 13 games this season. Wade battled through knee issues last season and lacked his trademark explosion to the basket as the season wore on. Spoelstra is doing his best to preserve Wade’s knees while at the same time maintaining the integrity of his starting lineup. Wade typically doesn’t play on consecutive nights and sat out a few games on a recent West Coast swing. Allen, the team’s 38-year-old sharpshooter, has been rested for four games this season and is shooting a career-low 34 percent from three-point range. Allen’s inconsistent shooting and Wade’s frequent days of rest are major factors in Miami falling behind the Pacers.

Spoelstra and team president Pat Riley would certainly prefer to overtake Indiana and claim home field advantage for the playoffs, but they’ve clearly shown that they won’t push their players too hard to reach that goal. Miami will need a healthy Wade, consistent Allen, and six fouls from Greg Oden to give the Pacers a worthy fight. Spoelstra is treating the regular season as an 82-game preparation for the matchup that really matters. At this point it’s once again championship or bust for the Heat.