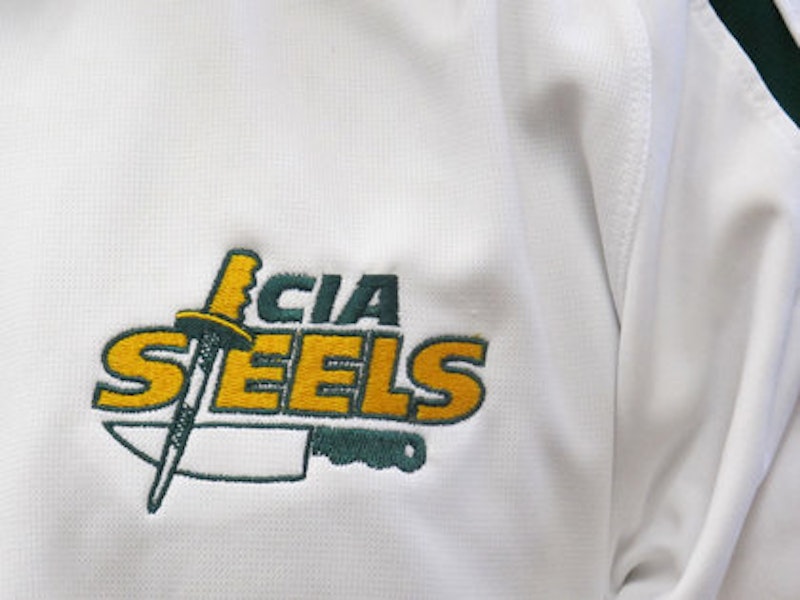 Chances are, if you stop in a random tavern in the Mid-Hudson Valley and make a joke about any of the five mother sauces, there will be laughs aplenty. That’s because the area is full o’ Culinary Institute of America graduates, many of them tending bar or flipping burgers in every other roadhouse between Linlithgo and Sleepy Hollow. The CIA, as it’s known, looms along U.S. Route 9 on the southern fringe of Hyde Park occupying a grandiose former monastery on the shores of the Hudson River. It’s an impressive sight from the road and river. And with enrollment numbers up, student body sports programs have sprouted and athletic conferences have been joined. Thus was born the CIA Steels roughly a decade ago, the namesake being a kitchen implement—the knife sharpener that keeps every chef happy and effective. The Steels logo is a sizeable kitchen blade decked out in green and gold with a sharpening steel at a harsh vertical.

The Steels’ basketball team started out the 2013-14 campaign gangbusters, running a 4-0 record at the expense of hardwood “foes” such as Cooper Union, Word of Life Bible Institute and the Webb Institute. Webb is part of the Hudson Valley Intercollegiate Athletic Conference, a 12-team collection that includes the Pratt Institute Cannoneers in Brooklyn and the Yeshiva University Maccabees. The CIA entered last Sunday’s matinee against the Albany College of Pharmacy and Health Sciences (the Panthers) at 5-6, having just dropped a game to Sarah Lawrence College on Saturday in Bronxville, which can be a confusing place.

Finding the Steels home court on the sprawling CIA Hyde Park campus involves streets named Parsley and buildings named Sage and eventually a kid in pajamas directs you to the big, boxy building on the far southern tip of the 170-acre campus. It juts out into a scything wind off the frozen Hudson. The Albany Pharmacy bus is nowhere to be seen, but there on the exterior wall is a gigantic banner photo of chef Paul Bocuse, who glares at you because he remembers your misorder of cannelle de Brochet last time you were hobnobbing in Lyon. Talk about intimidating an opponent… what chance do these pill-pushers from Albany have with the master of nouvelle cuisine glaring down on them upon entry?

The CIA gym is clean, spartan and somehow inviting. There are two dozen comfortable chairs on a drum riser at the far end of the room which is basically two basketball courts side by side. Generic green and yellow banners crisscross the ceiling above the court. There is the usual well-kept Daktronics scoreboard at one end of the court, the horrible PA system blares the standard Slipknot songs during timeouts. The dozen or so fans seem to be many couples in sweater vests, and one produces a plastic bag of noisemakers as the opening tip-off ensues. They offer them to their neighbors, and after awhile the noisemakers ease out a homespun warmth among the tiny crowd. The Steels have gone up 11-8 on a three-pointer by the slightly stocky kid from Goshen—Louis Guarneiri. He has a shy smile on his face as he gets back to play defense. The undersized Albany point guards seem nervous—still suffering from the Bocuse gaze, no doubt. The program doesn’t bother to list freshman, sophomore, junior, etc., as so many of the CIA students are there on two-year programs. After Albany settles in and Guarneiri airballs his next three-point attempt, some students wearing chef’s pants settle in near the scoreboard, ready for some Sunday afternoon entertainment.

As Ryan Swenson of Fremont, VA, takes a his foul shots from the charity stripe, the gym is almost quiet enough to hear the barges breaking ice out on the Hudson—gigantic IMAX style sound-effects that do their part to spice up the winter along America’s first river. Soon the fouls start piling up, and the slightly arthritic HVIAC refs have to hustle to keep up. There are tons of traveling calls, and as the first half wears on there is a stumbling awkwardness in the paint. Neither team has a field general type or a smooth post man—there is lots of staggering and swiping at loose balls with accidental bicep blocks and clotheslines galore. No paramedics are on hand, which is worrisome as Albany Pharmacy opens up an eight-point lead. Seems like these obscure games always have a half-time buzzer beater, and as the clock went down to :00.1 the Panthers’ Desmond Henderson of Middletown, N.Y., nailed a sweet, arcing three-pointer to put Albany up 35-24 at the intermission.

Both teams sleepwalked through the early portion of the second half, giving new meaning to “The Rock” brand basketball in official use. Every shot is dripping with desperation backspin from reluctant heaves. The hard-working Guarneiri, who regained his three-point touch, fouled out for the CIA with 2:30 left and the Steels down 58-56. They would actually take a brief one-point lead down the stretch carried by the shooting of six-foot-two David Hadley of Bridgewater, N.J. But the scrappy Pharmacy guys had the patience and clubbed out a 67-61 win with CIA making several embarrassing in-bounds passing gaffes in the final seconds when the game was still close. The final seconds did not go gracefully for the CIA squad as there were a few emotional outbursts and visible sulking. Ian Whalley of Manassas, VA, who did a lot of running during this game, tried to hide under his white Culinary jersey as the buzzer sounded. Albany coach Brett Barnard, who towered over everyone in Hyde Park and had given the refs an earful most of the afternoon, looked ready for an amuse-bouche as he led the victorious Panthers into the handshake line. Albany’s win put them at 6-8 and 3-1 in conference play. The Steels dropped to 5-7 and 1-3 in HVIAC action.

The dudes in the chef’s pants were entertained, in the end, because yes it was a very physical basketball game played in a spotless gym along a nice bend in the Hudson River. There was no snack bar and no basketball coverage in the CIA newspaper La Papillote. The headline was “Daniel Boulud Visits Campus.” Maybe the Steels should take down the Bocuse photo banner and put up Boulud on the outside of their gym? He probably favors more of a full-court press than that nouvelle zone defense.