Osaka isn't the only WTA player to falter after rocketing up the rankings. 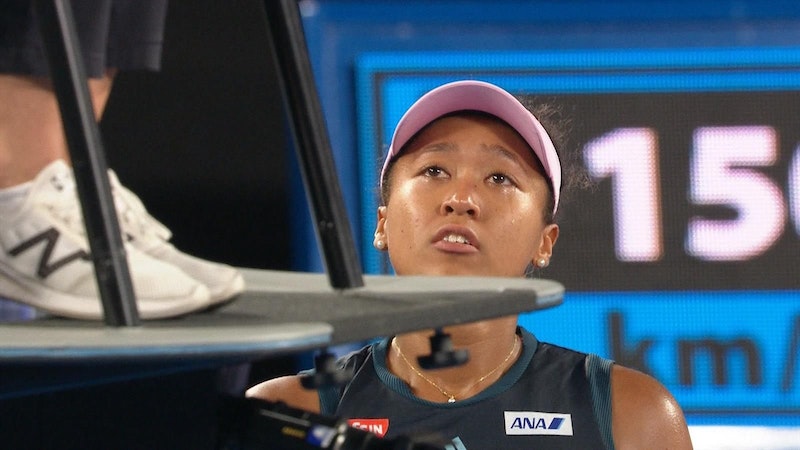 Naomi Francois Osaka, an American representing Japan, is one of the most hyped women on the tennis tour since the dawn of Venus and Serena Williams.

Osaka, only 21, has already earned millions endorsing Yonex, Nike, Nissan, Nissin, All Nippon Airways and others. But after winning the US Open in September and the Australian Open in January Osaka has slumped enough to lose her number one ranking, held for 20 weeks.

A downcast Osaka couldn't even complete her press conference after bowing out in the first round at Wimbledon to Yulia Putintseva, ranked number 43 by the Women's Tennis Association.

Normally quirky, Osaka struggled to find words and fell into the type of dark mood that often casts a shadow over her on court.

Asked why Putintseva has beaten her twice in successive tournaments, Osaka simply said, "She mixes the ball up really well."

She fought back tears after a journalist blamed the slump on her firing coach Sascha Bajin despite rising to number one with him. "I don't think it's related at all," she said. "I wouldn't blame my age. I've done a lot of good things, I've done a lot of bad things. I'm not the type of person that could say I can get away with things because I'm young."

When asked about handling pressure, she said, unconvincingly: "The key for me was just like having fun. Kinda taking the pressure off myself. I hope I can somehow find a way to do that."

But when a BBC reporter asked how she was coping with her newfound fame, she asked a tournament media manager "Can I leave? I feel like I'm about to cry." She then walked out of the room, frustrating dozens of Japanese journalists who fly around the world mostly to cover her.

Osaka isn't the only WTA player to falter after rocketing up the rankings. Sloane Stephens, who won the US Open in 2017, barely competed for another year. Simona Halep, after winning her first major at the French Open last year, enjoyed a hero’s welcome in Romania and then took an extended paid vacation, showing up at tournaments only to lose right away. Genie Bouchard, the darling of the circuit after reaching the Wimbledon final in 2014, plummeted toward her current WTA ranking of 79, one ahead of wounded superstar Maria Sharapova.

China's Qiang Wang, who came into Wimbledon ranked 15th, suggested Osaka isn't used to the pressure. "I think she did really well to win US Open and Australian Open and she was number one in the world. So, there is a lot of pressure from outside," Wang told me in an interview at Wimbledon. "I know that she wants to play great tennis. But she has to get used to being number one. If I was number one in the world, I would have to get used to it. It's not about being young or old. You have to be able to deal with it. That's what makes a number one player."

Stefanos Tsitsipas, a rising star on the men's tour who also lost his first round match at Wimbledon, said that he, Osaka and other young players can't blame their losses on age.

"I don't think that's an excuse. We've seen players my age, many years ago, I would like to name Rafa, Roger, seem very mature and professional. They had consistency from a young age. They always did well tournament by tournament without major drops or inconsistency. Something that we as the Next Gen players lack, including myself, is this consistency week by week. It's a week-by-week problem basically, that we cannot adjust to that."

Other players such as Sharapova, Bouchard and Nick Kyrgios have noted the isolation on tour in a sport known as "boxing without the blood." Osaka, born in Japan and raised in the US since she was three, often talks about her unusual upbringing as a tennis prodigy who didn't go to school or play junior tennis events with other girls. Her father, Leonard Francois, an immigrant from Haiti inspired by Richard Williams' success with his daughters Venus and Serena, trained his daughters Naomi and Mari on Long Island, and then Florida before deciding that she’d play for Japan, the native land of their mother, even though Naomi never spent much time there.

Though Osaka has worked hard to increase her comprehension of Japanese, she still answers Japanese-language questions in English, and doesn't appear comfortable in the Japanese media circus that often treats her like a freak because of her dual ethnicity and nationality. In addition to beating veterans such as Serena Williams and Czech star Petra Kvitova in grand slam finals, Osaka also has pressures that could push anyone over the edge.

Others on tour say Osaka just needs more time to deal with the rapid changes in her life. "Naomi is a little bit shy. She's still very young. But she's already getting to the high level. You know when you get to that level, every match she loses, people put more pressure on her," Taiwan's Su-weh Hsieh told me in an interview at Wimbledon, where she reached the third round before losing to Karolina Pliskova. "It's not easy. I think she's doing really good. She doesn't need to worry too much about how people judge her or say about her. She needs to keep doing her stuff. She has the game. She has the power. She just needs the time."