Did the Washington Wizards make a smart move taking the Japanese forward with the ninth pick in the NBA draft? 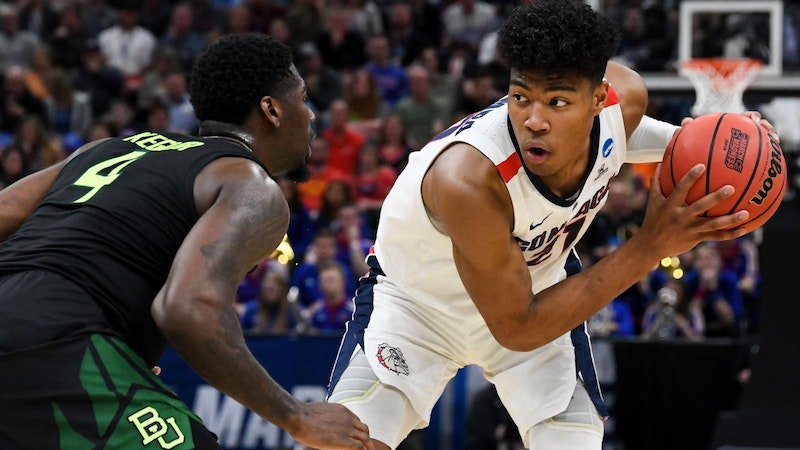 The Wizards could come under fire for picking Hachimura, 21, over Duke forward Cam Reddish and French 18-year-old Sekou Doumbouya, even though Hachimura was Player of the Year in the West Coast Conference, winner of the Julius Erving award for the nation's top forward, and MVP of the Maui Invitational, where he led Gonzaga over top-ranked Duke.

Hachimura might not be ready to help Bradley Beal lead a Wizards team beset with injuries and the recent firing of president Ernie Grunfeld. But forget for a moment that Hachimura, a 6-foot-8 forward, tends to shoot a line drive on the way down. Or that he sometimes failed to see open teammates during three college seasons in the state of Washington. Or that he was often flat-footed, hunched over or passively watching guys blow by him at the rim.

Consider the upside. The Wizards, 32-50 last season, instantly become the most popular team in Japan with the potential to sell millions of jerseys, caps and other merchandize to Japanese fans who are famous for their devotion.

Japanese TV networks will show most or all of their games, usually during morning hours in Japan. The Japanese media scrum, including more than 40 reporters who attended the draft in New York, will follow him around the league.

"It's crazy. It's unreal," Hachimura said after the draft on Thursday. "It means a lot to me, my family, my country."

His story does seem unreal. Hachimura was born in the mountainous province of Toyama, the son of Makiko from Japan and Zakari from Benin. He didn't play basketball until age 13, and then led his Sendai high school team to three national titles. He worked hard to learn English and pass the SAT to play for Gonzaga. The first Japanese ever drafted in the first round, Hachimura thanked his junior high school coach back in Japan, who told him that he could make the NBA.

Like Chinese hoop legend 姚明 Yao Ming of the Houston Rockets, and former Seattle Mariner baseball star 鈴木 一朗 Ichiro Suzuki, Hachimura has to overcome language and cultural barriers. Fans will surely get behind him on his mission to revolutionize the game in Japan.

Hundreds of Japanese have gone overseas to play pro golf, tennis, soccer and baseball, which remains Japan's number one sport, especially at the high school level. But basketball has never been as popular in Japan as in the Philippines, Indonesia or China, which will host Japan, the US and other nations at the FIBA world cup in September.

When Japan hosted the FIBA world championship in 2006, many hoop fans hoped the event, like the 2002 World Cup of soccer, would ignite a passion for the sport nationwide. But low-ranked Japan, qualifying as host, lost to Germany, Angola, New Zealand and Spain while saving face with a win over Panama in Hiroshima.

Even Team USA with Dwyane Wade, Carmelo Anthony and a young LeBron James couldn't attract more than hundreds of ticket-buyers to a hockey arena in the northern city of Sapporo. Anthony, unused to playing in empty gyms, made a mockery of the event by sneaking off the bench into a game during live action—until Coach Mike Krzyzewski scolded him.

Then before the semi-final with Greece, Anthony high-fived elderly Japanese security guards and admitted to other reporters and me that he couldn't name anybody on the Greek team because "their names are so very long". Unable to guard the pick ‘n' roll, USA lost to those long-named Greeks, who then lost the final by 23 points to Spain, led by Pau and Marc Gasol, at the Saitama Arena in suburban Tokyo.

Many fans lamented that Kobe Bryant, the NBA's biggest star at that time, attended the event in street clothes but didn't play. Despite FIBA's efforts, basketball still didn't take off in Japan. Two rival pro leagues squabbled with each other, confusing even hardcore hoop fans, until their merger into the B League in 2016.

Though I often saw kids playing at schools in Japan's far southern Okinawa islands, I could rarely find an indoor gym or outdoor court to shoot free-throws or play horse near my home in central Tokyo. So I volunteered to coach basketball at a junior high school in the bustling entertainment district of Shibuya.

Quick and team-oriented, the students lacked the height and athletic ability to play above the rim. They felt too short or self-conscious to dream of getting a college scholarship or playing in the NBA. So they didn't see the point of doing drills to improve their technique. They just wanted to scrimmage for fun before returning to study for the "exam hell" of rigorous entrance tests for high school and university.

I never saw Tokyo kids hanging around schools or playgrounds with "the rock" in their hand like we did in North America. The best athletes at school were playing on highly-organized baseball or soccer teams with serious coaches and parents hoping they could play for famous teams all over the world. For tennis, they batted rubber balls off school walls, and they also played a hybrid game called "kick base," combining aspects of soccer and baseball. Basketball was way down the list of sports behind badminton, kendo and other martial arts.

Kids back then lacked a Japanese basketball hero. Yasutaka Okayama was selected 171st by Golden State in 1981 when the draft had many more rounds than today. But he never appeared in a regular season game. Yuta Tabuse, a nifty 5-foot-9 guard from BYU and Hawaii, finally broke through for a few games with Phoenix in 2004 before returning to Japan. Yuta Watanabe, who played at George Washington University, played 15 games coming off the bench this past season with Memphis.

Hachimura can build upon that. If he succeeds in the NBA, or leads a Japanese team to victories at the 2020 Tokyo Olympics, hoop hysteria could finally spread across Japan. That puts a lot of pressure on Hachimura, whom baseball legend Ichiro Suzuki has called "a pioneer."

Hachimura acknowledged that on ESPN when he told fans, in Japanese: "Mina-san, yarimashita. Nihonjin hatsu." ("Everybody, I did it. The first Japanese.")