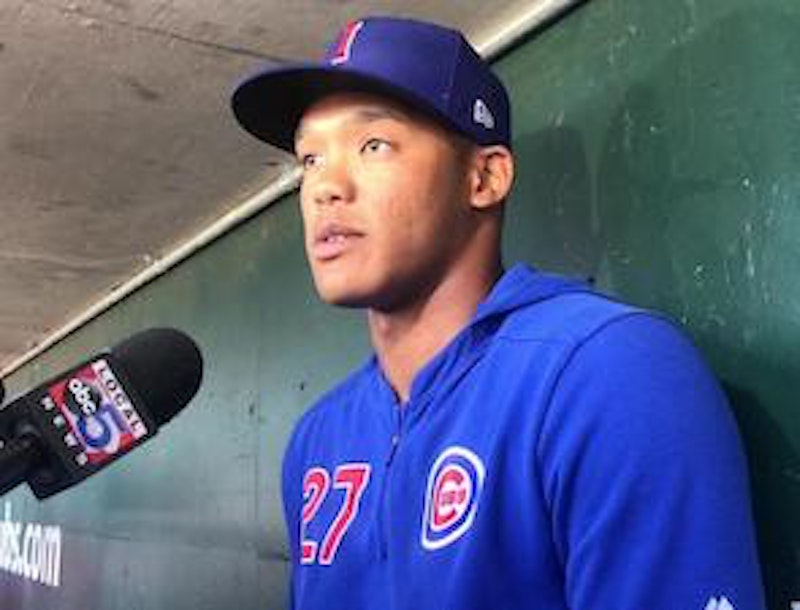 Philadelphia Phillies outfielder Odubel Herrera received an 85 game suspension over the weekend, ending his season, for violating MLB’s domestic abuse policy. Charged with simple assault, he left his 20-year-old girlfriend with visible neck and arm injuries. The All-Star outfielder will not appeal the decision and is far from the only MLB offender—which is absolutely unacceptable.

Herrera will be welcomed back into the majors next season as if nothing happened. That’s been the case for a number of MLB players. New York Yankees closer Aroldis Chapman allegedly choked his wife and admittedly used a gun in a domestic incident, firing eight bullets around her; he got a 30-game suspension for it and while he was still suspended, the Yankees traded for him. But hey, at least he doesn’t have a beard—because that’s completely against the Yankee way. The Houston Astros traded for closer Roberto Osuna in 2017 while he was serving a 75-game suspension for assaulting the mother of his child.

It’s an embarrassment for the league. These men are blessed with the opportunity to play a child’s game for a living and fans spend hundreds of dollars to see them. It’s a privilege, one that should be reserved for half-decent people, if they want to stay in business.

In late June, the problem came to the international stage with the Boston Red Sox and New York Yankees playing a two-game series in London. The point of the series was to showcase the game globally, but Steven Wright and Aroldis Chapman both pitched in each game for their respective teams. The message it sent is that MLB is okay with domestic violence so long as the league is turning a profit.

It also made clear that MLB is trying to expand in the wrong way. Why would they go to the United Kingdom where baseball is not a part of the culture instead of addressing one clear problem which exists: the fact that people don’t want to cheer on domestic abusers.

In 2017, a JD Power poll found that 24 percent of those who said they were watching less NFL games noted it had to do with the league’s failures on domestic violence policy; this was nearly as many (26 percent) as those who were fed up with national anthem kneelers. That makes sense because as the National Coalition Against Domestic Violence points out, "1 in 4 women and 1 in 7 men have been victims of severe physical violence (e.g. beating, burning, strangling) by an intimate partner in their lifetime."

It’s unclear how MLB expects that large swath of Americans who’ve been victims of abuse and violence to put that aside and cheer for such players.

There should be no place for domestic violence in baseball. Economically and morally, it doesn’t make sense to glorify men who commit it. Investigations and evidence are necessary, as everything can’t be based on hearsay, but it’s irresponsible of MLB not to issue lifetime bans for those convicted. On a government level, it is also appalling that the foreign players who have committed this domestic violence are still allowed work visas in the country.

Minor League Baseball has levied 50 game suspensions to players for marijuana use—longer than many of the suspensions for beating women. If a league has a bigger problem with a plant that’s legal or decriminalized in most states—and should be legal federally—than with men beating women and threatening to kill them, that’s a serious issue.

A friend recently suggested that perhaps MLB could force an offending player to play for the league minimum the season following the incident and have to donate the rest of their salary to an anti-domestic violence organization. If MLB wants to show millions of Americans they take domestic violence seriously, this would be another way to do it.

This is a problem MLB commissioner Rob Manfred desperately needs to address. The league can play as many London games as it wants, but its image problem will remain damaged as long as domestic violence is tacitly condoned.