A Wacky Week in Sports 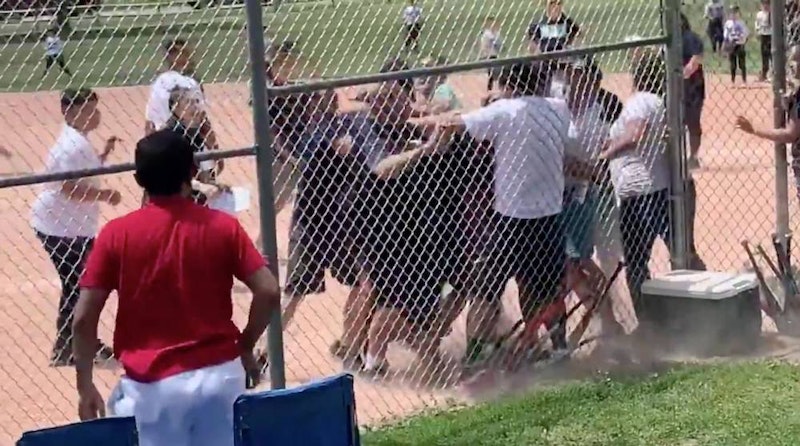 A ticket booth that stood for 50 years at Yankee Stadium had a sign above it that read, “Ballparks are baseball’s hallowed ground.” In the NFL, it's common to see players praying together and thanking God after a win, as if the deity has time to help tip a ball out of a receiver's fingers. Physical objects such as baseball cards and replicas of players’ jerseys, and revered moments in time (e.g. Dwight Clark’s “The Catch,” Lou Gehrig's “The Luckiest Man Speech,” the U.S. Hockey team's “Miracle on Ice”) become totems which symbolize something much greater than mere bodies in motion. They provide a tangible object or a shared memory around which communities can gather and bond.

Sports are America's secular religion. And just as religion—when it veers off its rails, provides vulgar spectacles as Jerry Falwell blaming 9/11 on gays and fellow religious grifter Jim Bakker's PTL Club TV show—sports delivers in a similar way. Last week was a bonanza. There was so much craziness going on in the sporting world, at so many levels, that it was hard to keep up.

Start with New York Jets running back Le'Veon Bell, who was robbed by two co-girlfriends. The young ladies, both in their early-20s, were in Bell’s bed when he left in the morning to work out, but upon returning from his exertions, he discovered that they'd relieved him of much more than just his outsized lust.

In what certainly must be the greatest 911 call in sports history, when the operator asked the value of the stolen clothes, shoes, money and jewelry, the former Steeler replied, “Oh, about a million,” in a casual tone. When she inquired as to what the two amorous thieves were wearing when he'd last seen them, Bell couldn’t help because, as he explained, they were both nude in his bed. And now they were “ignoring” him by not returning his calls.

Bell’s weak at assessing the character of his potential romantic partners, an essential skill of any high-paid pro athlete today, but he's headed for legendary status now. He takes his women two at a time, and is so rich that people want to steal even his shoes. And talk about a work ethic! He had the strength of character to leave all that nubile flesh behind in the morning and schlep to the workout place to run 40 yard dashes? Jets fans, who’ve had to subsist on such meager scraps for ages, now at least know that they have a warrior running the ball for them.

Two teams of seven-year-old boys were playing a game on June 21 in Colorado when the 13-year-old umpire warned a man about his F-bomb dropping. "It was kind of weird," the teenager said. "I shouldn't have to tell a grown man how to act around little kids." The warning sparked bickering among the “adults,” instead of bringing them to their senses, and it soon turned into an ugly brawl along the lines of the infamous Marichal v. Roseboro major league baseball one, in 1965. An unhinged woman, just as Giants pitcher Juan Marichal did against Dodgers catcher Johnny Roseboro on that day, picked up a baseball bat as a weapon, and when perhaps the only sane grownup in attendance tried to take it away from her, he got punched out.

Children ran away in fear after witnessing their parents act like sharks. And all for what? Nothing remotely honorable. You have to wonder if these kids ever want to suit up again.

Boosters are responsible for much of the cash illicitly funneled to college athletes, but few of them take it to the extreme that John Funes did. The rabid LSU fan was just convicted of stealing more than $550,000 from a hospital foundation and giving $180,000 to the father of a Fighting Tigers’ offensive guard. Even for the cesspool of corruption that's the SEC, this one stands out. Funes is probably a Robin Hood figure in the warped eyes of some LSU fans, but losing your perspective over a game to the extent that you take from the sick to keep your quarterback safe from sacks shows what sports can do to some people.

Funes now technically faces 20 years in prison, but you know it’ll be more like three. He’s surely got the gris-gris to protect him. The Atlanta-based entrepreneur's wealthy and well-connected, and all the good ol’ boy did was get a little carried over his team. Like they say in Louisiana, “Geaux Tigers!”

Finally, there’s the troubling story of Mayo Man, a bearded, wife-beater-wearing mayonnaise devotee who spooned America’s favorite, and most polarizing, condiment into his mouth from a giant plastic tub with a handle on it for 90 minutes while attending a Memphis Redbirds minor league baseball game. Mayo Man made no attempt to be surreptitious about his strange addiction.

Did he lose a bet? Was he trying to take a strong, positive stand on the debate over mayo, which some find disgusting? That big, wooden spoon went into his mouth too many times for me to buy it. I'm thinking it was a Redbirds PR department scheme in an attempt to get some viral action, and that the “mayo” was something like vanilla pudding. I know that’s what I want to believe.