A Dream Day with Roger and Rafa at Wimbledon

If I could relive a slice of my life on a weekly basis, I'd choose Federer vs. Nadal. 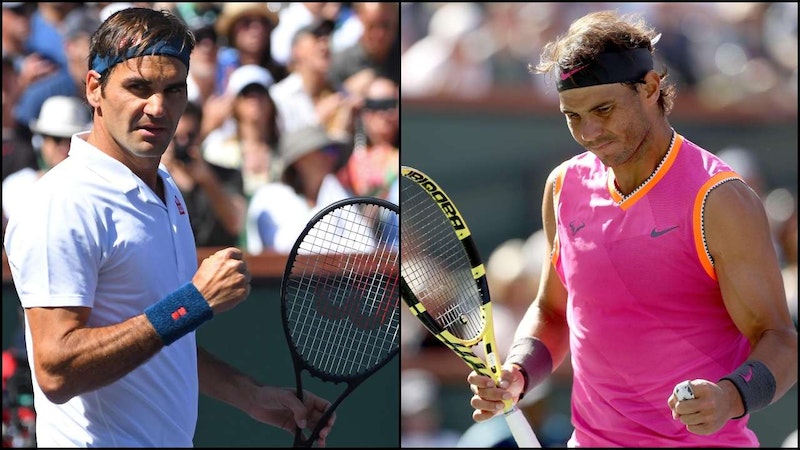 It begins with me walking through the Wimbledon gate alongside former Wimbledon champion Boris Becker. Then former number one Mats Wilander, now commentating for Eurosport TV, comes to my desk to borrow a pen and chat about the upcoming match. I turn around and there’s Rod Laver, the greatest player of all-time before the dawn of Bjorn Borg, John McEnroe, Pete Sampras and others. The young British security guards, standing for hours without break, are opening doors for us, treating us like royalty at an event attended by real royalty.

When I return to relive this dream, I'm back in the line of about 50 journalists waiting an hour for a seat to become available in the press tribune, about seven rows behind the players on Center Court. Scalpers are reportedly selling $150 tickets for $10,000. But I have an even better view of history.

It's a surreal experience that keeps getting better every time I re-watch the highlights. The hype has been building the whole fortnight. It's their first meeting on grass in 11 years since their 2008 final, probably the best tennis match ever. They’ve somehow improved as players, getting better with each game over the course of nearly four hours. Roger, going for almost every shot, flicks half-volley lasers from the baseline that only he can hit. Rafa sprints to the corner and hits passing shots at ridiculous sharp angles. Rafa grunts across the hushed stadium. Roger glides over the grass in a silent grace.

As the match spirals upward, even cagey reporters are losing their minds, gasping and cheering. Normally, I only clap at matches for good sportsmanship. But I can't help myself. With these two champions refusing to lose, we never know how it’ll end until Roger finally wins on his fifth match point in what he later called "a crazy game."

Even if Novak Djokovic, 32, is number one in the world right now, and capable of consistently beating both of his foes, there’s no better rivalry in sports history than Roger and Rafa. Ali and Frazier didn't fight 40 times. Michael Jordan, Magic Johnson, Larry Bird, Kobe Bryant or LeBron James weren't playing horse or one-on-one. Wayne Gretzky and Gordie Howe weren't competing in the same era, nor were Babe Ruth and Ted Williams or whomever you think is the greatest baseball player of all time.

But that's what we get with Roger and Rafa. They’re the best players ever in their sport because they’re battling and bettering each other through each phase of their careers, and keep pushing each other to higher heights.

Before the match, I thought Rafa, 33, would win. I thought he could endure more suffering than Federer, who turns 38 this August and enjoys two sets of twin children plus his net worth of well over $100 million. Rafa's had better results this year, including his record 12th French Open championship, where he destroyed Federer in a wind-blown semi-final on clay. Rafa’s looked like a caged lion released into an arena to devour the flesh of infidels. His serve, backhand, forehand, volleying, and overheads have been better than ever.

But as Federer told a packed pressroom later, "The stars are aligned right now."

This is what their rivalry is really about: magic.

As Federer said, the match lived up to the hype. It almost always does. The stat sheets, provided by the media center staff here, tell you almost everything except the number of shots on the line. I swear that Roger hit the line at least 100 times.

Maybe at the Western and Southern Open in Ohio, or somewhere else, I'll ask him if he intentionally aims for the line, or an inch inside the line, or just an open hole he sees in a flash of revelation. "All of us have less time on the ball these days. So whenever you get the opportunity, you go for it," Federer said.

Nobody is going to write a bad word about Federer today. It's impossible to hate Roger. If you like music, you like The Beatles. If you like tennis, you like Roger. My German and Swiss colleagues tell me that Roger is even nicer in his native Swiss-German. He’ll talk to you about anything, even about his love for the flowers at Wimbledon. Roger is like everyone's tennis buddy. He's your hitting partner down at the local club or community court. He's exactly in person what you see on TV.

Rafa’s also exceptionally open-hearted, genuine and generous with the press. After he won the French Open two years ago, he took me and the other photographers on a boat trip down the Seine. He sat round a table with the Spanish reporters drinking champagne and joined all of us for a group selfie. I now regret taking the photo, because I'm not in it. But I often see him in the elevator going up to the media center in Mason, Ohio. Rafa says hello or ciao. He's basically still a kid from Mallorca who enjoys fishing or watching sports with his friends.

Immediately after his loss to Federer, I saw Rafa's fiancée. She wasn't crying over the defeat. She was smiling and laughing with her friends. Life is beautiful. Her boyfriend just played another epic with Roger.

As I discovered photographing them playing doubles together at the inaugural Laver Cup in Prague in 2017, the Roger-Rafa relationship is based on mutual respect and admiration. Many people speculate that they’re secretly lovers. I don't care; maybe they are. Their affection and appreciation is pure and palpable, and it spreads throughout the sport.

Before the match, Rafa said the outcome wouldn't change their wonderful friendship. After losing the match, Rafa mostly praised Roger. "He's able to do the most difficult things easy. He puts pressure on the opponent all the time. He has the ability to take the ball early. I think his return was better than my one this afternoon. He played well. So he deserves it. Congrats to him."