The 2011 Red Sox began the year playing poorly, spent most of the season dominating, then discovered the the most heart-wrenching way to blow it, losing their spot in the playoffs on the last day of the year. 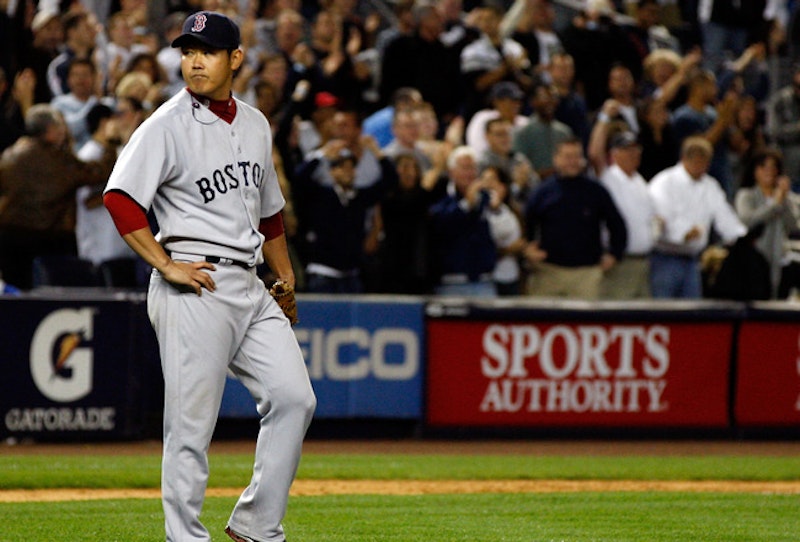 After last night, nobody can say the Boston Red Sox don’t appreciate symmetry. Their game against the Orioles, like their season, ended with a thundering thud in Baltimore. The Red Sox bookended their season with some of the worst baseball imaginable from a roster so talented, and in between displayed brilliance few teams can surpass. It was the bipolar behavior of a graceful socialite who, after charming everyone in the room, leaves the party and clubs his own brains in with a cast iron pan. The game of Sept. 28 was the final piece of a puzzle which saw a first place team, holders of the best record in the league on September 1, miss the playoffs.

To truly appreciate the artistry involved, you must go back to April when the much-hyped future 100-win 2011 Boston Red Sox began their season 2-10, causing a minor tear to the space-time continuum. But after a lousy first month, the Sox improved their play, saving the Coast Guard from innumerable hours of digging bodies out of the Charles. The Red Sox’s 72-37 record was the best in baseball from May through August, and the early season struggles were forgotten.

September 1 saw the Red Sox in first place in the American League East by a half game over the Yankees, and preparing for a first round playoff match-up with some lesser team. At that point the Sox had the best record in the American League; only the Phillies topped them. Boston led the inconsequential Tampa Rays by nine and a half games, a fact that didn’t merit mentioning at the time. Then everything stopped working.

Loss after loss after loss piled up. The team professed certainty that a turnaround was imminent, but the losses kept coming. September saw the team lose a staggering 20 games while winning only seven, a winning percentage of .259. After a full season of that a team would find themselves 42-120 at season’s end. It would be the worst season since the expansion 1962 New York Mets.

Something huge must happen for a team as good as the Red Sox to turn into a historical nightmare on a dime. There were many problems, but the biggest was the starting pitching. So strong through the first four months, it disintegrated upon September entry. Red Sox starters in September featured an ERA one and a half runs higher than the next worst team in baseball.

As losses piled up, the Sox saw their division lead and then their hope of winning the division, disappear. One day they woke up to find the Rays right on their tail. Then they went back to sleep. The numbers still gave the Sox over a 95 percent chance to make the playoffs. The players weren’t worried. The Rays kept winning though and the Red Sox kept losing. With three games to go the Sox held a one game lead. Boston went to Baltimore and Tampa headed home to face the Yankees. Even with so slim a margin, the race should have been over. Then the Red Sox lost again and the Rays won. The teams were tied. Both teams won on Tuesday to set up last night’s action. If either team won while the other lost, the winning team would win the Wild Card and the losing team’s season would end.

The Rays were pitching their ace, David Price, against minor league call-up Dellin Betances of the Yankees. The Red Sox had their ace, Jon Lester, against another in a long line of mediocre Baltimore starters, Alfredo Simon. The night got off to a promising start for Boston, as the Red Sox took a 1-0 lead while the Rays fell behind 3-0. Then, not two innings in, the Yankees Mark Teixeira effectively ended the Rays season with a grand slam. The Rays were down 7-0 in a game they could not lose.

Back in Baltimore, the Red Sox had given away their lead and stolen it back on a balk and a solo home run. Then in the seventh, it started to rain. The tarp came on the field and redirected all eyes to the dumpy dome in St. Petersburg, Florida where the bottom of the eighth was unfolding. Tired of providing aid and comfort to their bitter rivals, the Yankees pitcher loaded the bases, walked in a run (7-1), then hit a batter forcing in another run (7-2). After a sacrifice fly (7-3), third baseman Evan Longoria homered. All of a sudden it was 7-6. The Yankees got out of the eighth without any more damage, and of course, failed to score in the ninth.

In Baltimore the tarp was taken off the field but the Red Sox offense had stayed in the clubhouse. Boston batters left the bases loaded twice going so far as to have a runner thrown out at the plate (Baltimore had one too). They would never push across another run and went into the bottom of the ninth holding a 3-2 lead.

With their season on the line in the bottom of the ninth, the Rays first two batters went down quickly. Sam Fuld stepped to the plate. Fuld is a light hitting outfielder whose bat is not the sort on which you want your season to depend, so Rays manager Joe Maddon wisely sent up a pinch hitter. The man he chose was Dan Johnson. Johnson is a 32-year-old who has managed to remain in the big leagues despite not hitting over .200 since 2007. In 83 at bats this season Johnson hit .108. It was an odd choice to say the least. So of course, with two strikes, Johnson homered. Tie game.

In Baltimore, as in Tampa, the first two batters of the ninth went down quickly. With nothing to play for and one out to go before their pitiful season came to a close, the Orioles looked finished. They weren’t. The next batter doubled off closer Jonathan Papelbon. No worries for Boston though, as there were still two outs. They just had to get this next hitter and nope, another double. Tie game.

Meanwhile, the Rays and Yankees had reached the 12th inning. Despite putting two runners on base, including one to third with less than two outs, the Yankees had failed to score in their half of the inning. The highlight was a defensive play by Longoria to tag out a Yankee runner on third base. BJ Upton led off the bottom of the 12th for Tampa. He struck out. Up stepped, guess who, Longoria.

Back in Baltimore, Robert Andino stepped to the plate. Like Fuld and Johnson, Andino is essentially nobody. He’s a career .246 hitter, who has hit .280 with two homers and two doubles against the Red Sox this season. Andino hit a sinking line drive to left field, the home of the Red Sox $142 million man, Carl Crawford. As Crawford races in to make the catch, let me tell you about his first season in Boston. I’ll be brief since he’s running to make a catch. It was a colossal failure. Brought in for both his bat and spectacular glove, the outfielder had seen all aspects of his game deteriorate out of nowhere. A star in Tampa at the age of 28, Crawford possessed the skills of a player who ages very well. Crawford was to be the centerpiece of a new athletic Red Sox team. Instead, his skills vanished upon putting on a Boston uniform. Andino’s liner was sinking fast so we better get back to that. This was just the kind of play Crawford has been brought to Boston to make. He ran in and slid to catch it and the ball clanked off his glove. As he searched for either the ball or his dignity or possibly both, Nolan Reimold, who had doubled to tie the game moments ago, rounded third and scored easily on the weak throw home. The Red Sox, certain victors moments earlier, somehow, someway, had lost.

Adding insult to self-defeat, they wouldn’t make it to the clubhouse before their season ended. If ever there was a moment created for this electronic era, it was this. In literally the very next minute, a thousand miles to the south, Longoria hit Scott Proctor’s sixth pitch over the wall in left field. His second homer of the day won the game and the Wild Card, and cemented the Rays’ spot in one of the greatest comebacks in baseball history. The Red Sox lost the game and a moment later lost the Wild Card while, if one can use the word, winning a spot in baseball infamy, all in a single moment.

Perhaps the most shocking aspect was how promising for Boston each of the games seemed. The Rays were taking on water by the second inning and dead in it by the third. The Red Sox got to the last out of the ninth inning leading by a run with their best pitcher on the mound. According to FanGraphs, a website which tracks such things, the Red Sox were had a 95 percent chance to win their game. The Rays were 99 percent to lose. But somehow it all fell apart. For Boston it came apart in the same way their season did, in one final shocking disappointment perpetuated by mistakes, missed opportunity, and ultimately failure.