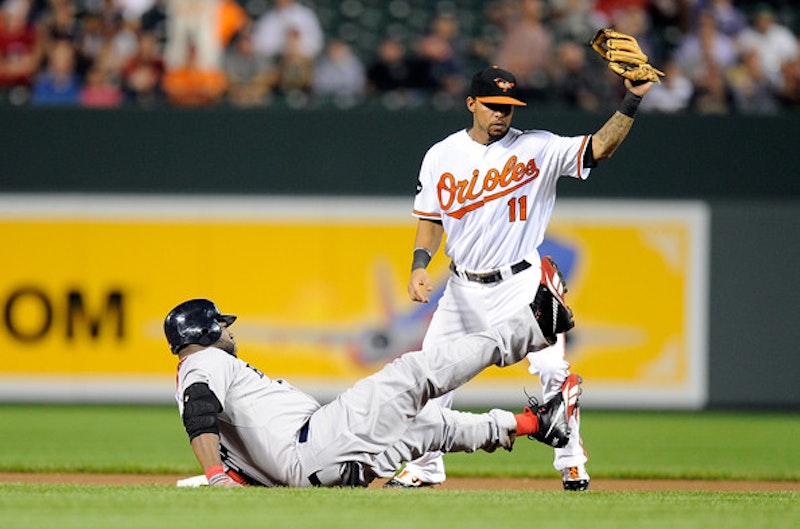 Just a few days ago Robert Andino was a non-descript reserve infielder for the downtrodden Orioles. Now, thanks to a sinking line drive and a failed sliding catch by Carl Crawford he is "Robert Fucking Andino" in the minds of many New Englanders. Much like Bucky Dent and Aaron Boone before him the name Robert Andino will haunt the nightmares of Red Sox fans for years.

Of course, Andino was just doing his job. The Orioles played admirably in knocking off the Red Sox, the worst team money could buy, from the playoff race on the last day of the season. I heard complaints from people saying the Orioles partied a little too hard after Wednesday's walk off win. Those people apparently haven't been paying much attention to the dynamic between the two franchises over the past decade. As the Orioles sunk further into their abyss the Sox rose to prominence. The pink hatters and bandwagon hoppers fill Camden Yards nine times a year and start their annoying chants and shout down what remains of the home crowd. The NESN network went so far a few years back to refer to Camden Yards as "Fenway South" in a commercial. The Mother's Day massacre in Fenway of a few years back that saw a dominant Jeremy Guthrie performance and a five-run lead evaporate in the blink of an eye was another bitter pill for O's fans to swallow. The two teams had a beanball war in a series in August that led Josh Beckett to issue some comments dismissing the Orioles as a relevant franchise. Care to rephrase Josh? And I just assume everyone wants to see Papelbon punched in his stupid face, right?

So yeah, the Orioles celebrated. They danced and whooped and hollered. They didn't roll over and let the Red Sox attain their assumed playoff appearance. They played hard and smart. They didn't let those bastards celebrate on the field at Oriole Park. It was the type of baseball they should always play. It was a cathartic win that for a brief moment returned the cheers and thrill of meaningful baseball to Camden Yards. That's how we have to take it these days, brief moments. It's all we have and we won't apologize for it. Wednesday night was a big middle finger from the Baltimore faithful to the marketing creation that is "Red Sox Nation." When baseball returns in the spring after an offseason of revamping and upheaval in Boston and bumbling half measures in Baltimore the two teams will return to their normal places in the AL East hierarchy, looking up to the Rays. Wednesday didn't change Baltimore's baseball future but it sure was fun for a few minutes.

The real reason the Red Sox missed the playoffs is obviously their lack of starting pitching depth. The nearly simultaneous heroics of Andino and Evan Longoria would not have been possible if not for injuries to Clay Buchholz and Dice-K, John Lackey's apparent desire to finish his career in the Atlantic League, and Erik Bedard being Erik Bedard. It sounds like Terry Francona is going to be the fall guy.

Francona didn't sign Lackey or Carl Crawford. He's not the reason Bobby Jenks and Dan Wheeler got hurt leading to the overworking of Daniel Bard and a reliance on table scraps like Matt Albers. He didn't trade for the chronically unreliable Bedard to stabilize the team's floundering rotation. Theo Epstein has long been Boston's Boy Wonder, and rightly so given the two World Series titles that have been won under his watch, but you have to take the good with the bad. Epstein has lost several top assistants over the past few years. The Red Sox farm system, though much ballyhooed, failed to deliver any big time arms to the Big League club when they were needed most.

In Tampa Joe Madden has a stable of dominant young pitchers at his disposal. The Rays are so confident in their development process that Madden will start rookie Matt Moore in Game One of the ALDS. Madden either has huge balls or a strong belief in Moore and the Rays development people, or maybe both. The Red Sox have become what they hated most, the Yankees, chasing big ticket free agents. Damn the torpedoes! Too bad they played more like the Cubs, another team that apparently likes spending money more than winning.