Say it Ain’t So, Mpho

Lithuanian and South African baseball fans will have to wait. 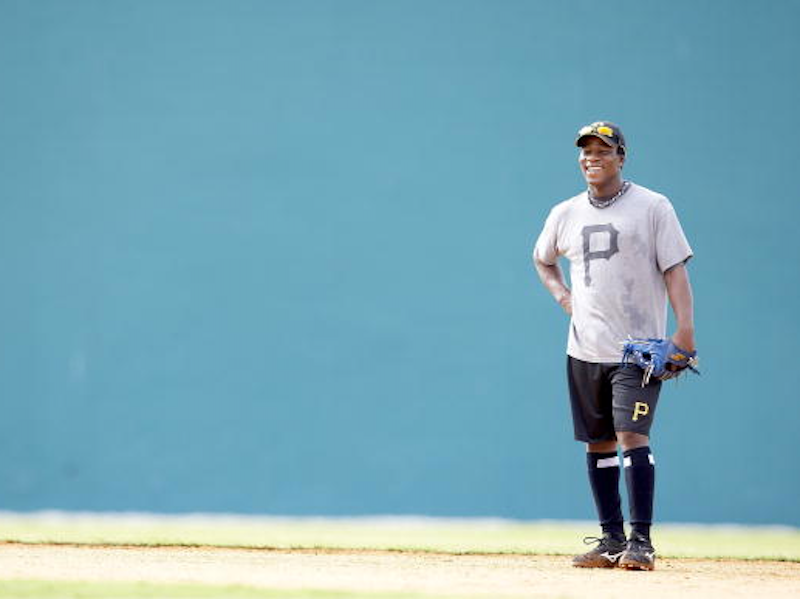 I’d just finished explaining to my 11-year-old the reasons for U.S. women’s soccer star Hope Solo’s suspension when word came through that two Pirates minor leaguers were in a bar fight in Toledo last Saturday night and had been suspended for the remainder of the AAA season. Well, word didn’t really “come through,” instead I had to mine it from various fan websites and chat rooms with a considerable amount of effort. It wasn’t exactly David Wells vs. Rocco Graziosa in a predawn Manhattan diner or Billy Martin vs. marshmallow salesman Joseph Cooper in a Minneapolis hotel bar, but it turned out to be a doozy in Toledo and it involved a player my daughter and I had just seen on a recent baseball trip to the Rust Belt.

If this minor league incident was a joke, it would start like this: A South African shortstop, a Lithuanian pitcher and an Australian pitcher walk into a bar in Toledo...” Imagine the steamy noir scene at 2:30 a.m. in the “warehouse district” of downtown Toledo where the neon sign of the Bronze Boar cigar bar throws a devilish orange glare over N. Huron St., across from the Fifth Third Stadium and hard by the Maumee River. Imagine a 26-year-old Toledo Mud Hens pitcher in a dispute with another bar patron, a 23-year-old local, while the two Pirates prospects look on. The minor league Detroit Tigers lefthander punches the townie in the face outside the bar and the cops are called. As officers move in to subdue Warwick Saupold of Perth, Australia (the names get better in this one) the Pirates AAA reliever Doyvas Neverauskas objects and begins shouting at the cops, trying to get one of them off Saupold.

Enter Mpho “Gift” Ngoepe, the Indianapolis shortstop who wears short dreadlocks and hails from Pietersburg, South Africa. He’s known more for his glove than his bat and has worked his way up through the Pirates organization with due diligence and eight minor league seasons before the mast.

Ngoepe began as another international novelty for the Pirates scouting department along with the "Million Dollar Arm" Indian cricket guys who, not surprisingly, did not pan out for the Bucs. I feel like Ngoepe has grown up with my daughter. Her first Spring Training in Bradenton, Fla., saw Ngoepe as a late-inning replacement all skinny and awkward in March of 2009 or so. Now, as she enters her pre-teen years, we saw Ngoepe in Columbus, Ohio, all matured and having filled out his body and very much a "watchable" shortstop with some flashing leather. The minor league bus rides and fast food no doubt helped him gain weight, and he etched out a new hairstyle and was obviously beginning to work on his "swagger." Which is probably what lead to the mishegas outside that Toledo bar.

That is where Gift made what many bus stop helicopter moms would call “poor choices” as he wrapped his arms around the Toledo cop who was trying to keep Neverauskas away from the police car holding fellow relief pitcher Saupold. What followed was a Marx Brothers skit involving Ngoepe trying to help his teammate Neverauskas, who hails from Lithuania, trying to pry his South African pal away from the long arm of Johnny Law. Both ballplayers got hauled in eventually by the harassed Toledo gendarmes, booked with misconduct, assault, and resisting arrest. The Buccos promptly suspended both players for the remainder of the minor league season (seven games) and both have a Sept. 13 court date in Toledo.

That sound on Park Ave. in New York City on Monday morning was the slamming of fists onto desks by the wonks at MLB International. Aside from the raft of Cuban prospects signing left and right throughout the big leagues, they had a great storyline set for the September call-ups. This week 26-year-old Ngoepe surely would’ve been the first South African to play Major League Baseball as a Pirates call-up, and likewise for Neverauskas who would’ve been the first Lithuanian to make it to the pinnacle of pro ball. But no, vintage Ohio boredom took its toll and both players—well, in the words of Willie Wonka after examining the contract, “[You] get nothing! You lose! Good day, sir!”

Neverauskas, who signed with the Bucs when he was 16, is reportedly bound for the Arizona Fall League following the end of the AAA slate. Ngoepe, who hit his eighth home run of the year in the eighth inning of his final game of the season, will probably spend his lonely days working out in Indianapolis. The Pirates are already dealing with an international scandal in the form of the Korean star infielder Jung-Ho Kang who was under investigation for alleged sexual assault of a woman in a reverse Murphy scam type of deal at a Chicago hotel last month. Adding another public relations mess is not going to help the Bucs scratch and claw their way into the final NL Wildcard spot.

The loosey-goosey Tigers, meanwhile, were more lenient on their wayward pitcher, allowing Saupold to return to action to get the win in relief in a game on Monday against the same Indianapolis squad. He doesn’t, however, seemed destined to be a Detroit call-up as the rosters expand. Saupold will probably never be as famous as fellow Aussie hurler Graham Lloyd who charged in from the bullpen and lit up a Yankees-Orioles brawl in 1998 that is still talked about in the Bronx.

With all these international players throwing dukes out in the Rust Belt, I just hope they didn’t drop their passports on the barroom floor. Between this United Nations trio down in the minors putting the Bronze Boar on the map and the behavior of Cuban showboats Yasiel Puig and Yoenis Cespedes, a fan can almost long for the days of “corn-fed Iowa farmboys” being the toast of the town. At least these young globetrotting ballplayers should have been smart enough to have a Hank Bauer-type player around to take the fall. And here’s to the Toledo police in this incident who did not overreact, apparently, and start tasing pro athletes like they were going out of style.