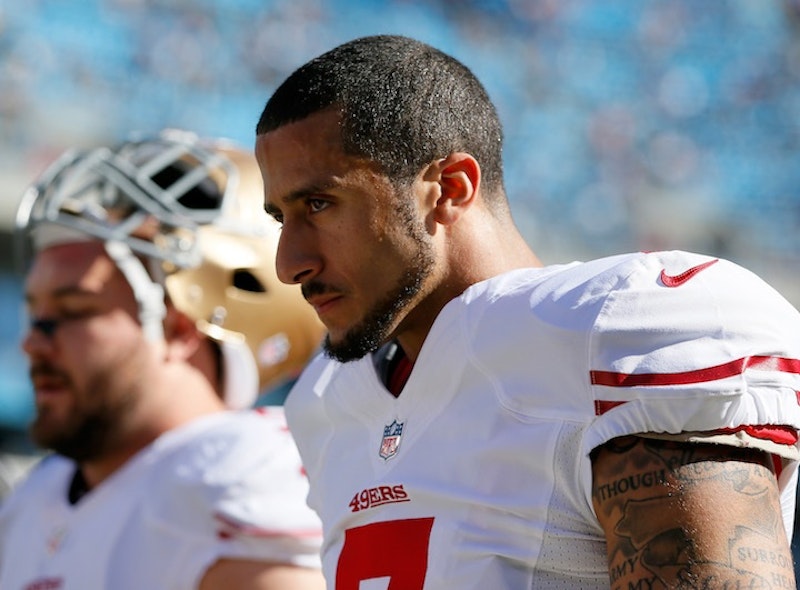 My first reaction to San Francisco 49ers’ quarterback Colin Kaepernick’s refusal to stand for the national anthem at Friday's preseason game against the Packers was a groan. As a devout Niners fan, the last thing I want is a “locker room distraction,” any hint of which causes serious sleep deprivation among NFL coaches. When the pundits are ranking your team just above perennial doormats like the Cleveland Browns, defensive thinking becomes second nature.

Football’s the most right-wing American sport, so the backlash was as furious as predictable. Some of my more dramatic fellow 49ers fans have filmed themselves, hand over heart, burning Kap's jersey while the national anthem plays in the background. For these individuals inclined to maudlin acts of childish rage, I only feel embarrassment. Kap is still one of us, regardless of one sincere act of protest, and he's obviously contributed to the team infinitely more than any petty-minded, disgruntled fan.

Kaepernick’s upset the delicate truce that exists between the mostly black, rich NFL players and their white, not-so-rich fans. The fans need them, even though they're not of the preferable race, because they need their football teams to win. They're not completely comfortable with this dependence, but will tolerate it, until a player breaks an unwritten rule. When that happens, all the repressed resentment starts flowing out.

The 49ers QB is even accused of not respecting “the troops.” Most likely, these are the same people who think saying black lives matter implies that white lives matter less. Anyway, we have those people to protect Kaepernick’s right to sit out a patriotic ritual without being arrested. Also, his protest has nothing whatsoever to do with them. It's the police he's concerned with.

Logic is not the strong suit of the Kap haters. Some of them say his huge salary makes him a “hypocrite.” What they fail to grasp is that the quarterback isn't calling himself a victim. He’s trying to stand up for minorities he perceives as being victimized. Having a lot of money shouldn’t disqualify him to act as their advocate. You could reasonably argue it's his responsibility.

In his postgame comments, the biracial Kaepernick stated that he was specifically protesting police brutality against people of color. He also made it clear that he's not concerned about any impact on his career or endorsements. That's commitment not often seen in today’s pro athlete/would-be mogul. Michael Jordan never stood up for anyone during his playing days, when his income was vulnerable to controversy. He didn't want to lose those Republicans who bought his shoes, as he explicitly stated.

As a sports fan, I've never understood why “The Star Spangled Banner” is played at games in selected sports. Songs like “Take Me Out To The Ballgame,” which have everything to do with the game, are the ones that belong. The tradition is tailored for the flag-worshipping types who love putting on ostentatious demonstrations of their patriotism and judging others on their lack thereof.

I wonder if this huge hornet's nest is connected with Kap’s feelings about being on the team. It's looking like the one-time golden boy, who took the Niners to the Super Bowl in just his second season, will not regain the position of starting quarterback he lost to Blaine Gabbert last year. What if this year was another year like his Super Bowl year and he saw potential to do it again? Would he possibly have stood up when the song came on and chosen another, less volatile, outlet for his rage?

Such questions are far more interesting than this national drama, which has a pre-scripted feeling. Trump voters (and 49ers haters, of course) will vilify a hard-working black athlete acting on his conscience, and Hillary voters will champion a minority member exercising his First Amendment rights.

Among the 49ers fans, I also wonder how much Kap’s fall from grace has influenced their reactions. How many would be burning his jersey if the season was looking better? I wonder if Kaepernick is so discouraged now with his once-promising football career that he's prepared to burn it all down and take the consequences of his commitment. The only clear winner I can identify here is the Black Lives Matter movement that Kap identifies with. He says he’ll keep sitting until he feels differently. The most interesting thing to look for now is whether other athletes will follow Kaepernick’s example. I don't think it will take long.