Detroit’s star doesn’t get his due. 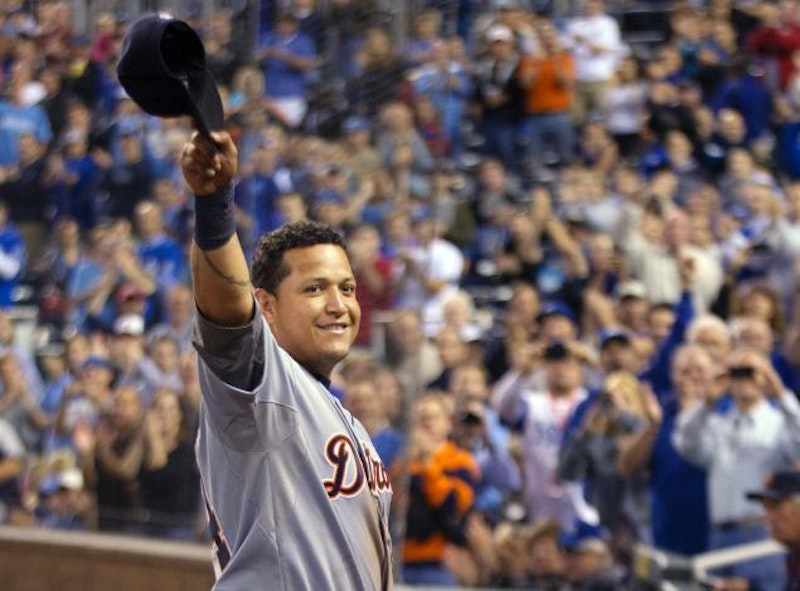 On Wednesday night Detroit Tigers third baseman Miguel Cabrera became the first Major Leaguer to win baseball's Triple Crown since Carl Yastrzemski in 1967. Despite what some people have insisted over the past few weeks, winning the Triple Crown is a major achievement.

Cabrera's Triple Crown hasn't received nearly the attention that it should. There are several culprits denying Cabrera of his just due. The remarkable run of the Oakland A's and equally remarkable Texas Rangers collapse have rightfully been baseball's biggest stories. The Baltimore Orioles’ inexplicable success in one-run games and first postseason appearance since 1997 has also stolen some of Miggy's thunder. Finally, the debate over whether Cabrera or the Angels' Mike Trout should be the American League's MVP has led many to downplay the significance and importance of the Triple Crown. If you're wondering how important the Triple Crown is go ask Jim Leyland or Justin Verlander. Without Cabrera's September power outburst the Tigers would be lining up tee times rather than preparing to host the A's in the American League Divisional Series.

The Triple Crown is such a difficult statistical achievement that it took 45 years for someone to do it. I just assumed that I'd never see anyone do it in my lifetime. If Albert Pujols couldn't do it then no one could. Yes, Pujols, Barry Bonds, Ken Griffey Jr., and even Mike Trout failed where Cabrera succeeded. The celebration and recognition for Cabrera's achievement should be removed from any MVP debate. Not only is the Triple Crown pretty damn cool, it cements Cabrera's place as baseball's most devastating hitter.

I'm sickened by the level of ignorance and condescension exhibited by members of the SABR community regarding Cabrera as he chased the Triple Crown. ESPN's Keith Law, who's gone from front office executive to Skip Bayless with a radar gun, suggested that the Triple Crown was a red herring. Oh isn't that cute, Cabrera won the Triple Crown, but what was his UZR? The rise of sabermetrics has clearly been good for baseball. Teams and fans alike now have more information than ever at their fingertips. The problem with sabermetrics is that it has resulted in a culture of smug know-it-alls like Law who almost speak with contempt for the national pastime. A large part of the allure of baseball is the history of the sport, comparing eras, comparing teams, debating the merits of player A vs. player B. The notion that everything that happens over the course of a season can be boiled down to a single equation and that all other observations should be tossed out the window is laughable and insulting to long time fans of the game. Why even watch the games?

The Triple Crown alone should not automatically result in an MVP award for Cabrera in the same way that Mike Trout's remarkable WAR also shouldn't result in an automatic MVP award. National commentators should speak with equal reverence for the astounding accomplishments of both players. The Detroit lineup beyond Cabrera and Prince Fielder is fairly nondescript. In addition to the Triple Crown categories, Cabrera also led the AL in total bases, slugging percentage, and OPS. The Angels went on a winter spending spree that brought Pujols and C.J. Wilson to SoCal and added Zack Greinke in a deadline trade. The Angels got off to a slow start before getting a jump-start when Trout was promoted in late April. Somehow the Angels managed to miss the postseason despite that impressive collection of talent.

The Cabrera/Trout debate will rage on but the one thing everyone should agree on is that Mike Scioscia was baseball's least valuable manager in 2012. Amidst the MVP debate baseball fans should remember that winning baseball's Triple Crown is still a big deal and so is Miguel Cabrera.