The Next Red Sox Manager Could Also Be a Scapegoat

And a brief history of Bobby Valentine. 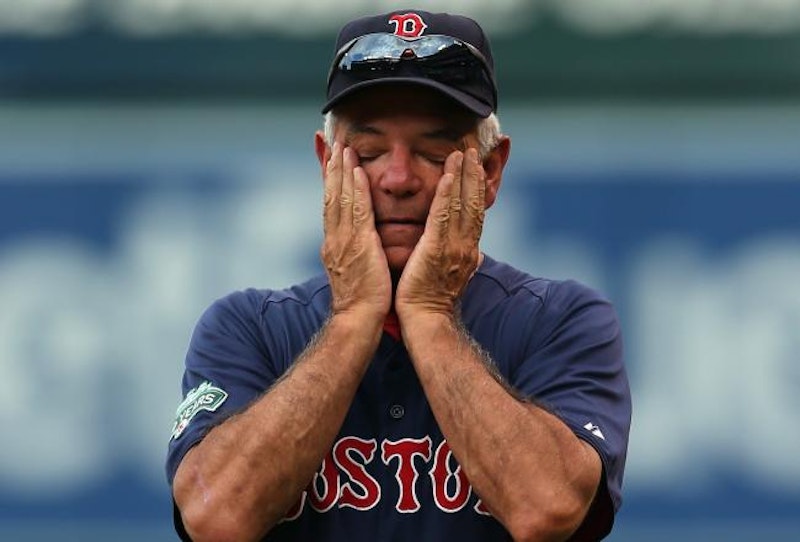 The Boston Red Sox’s 2012 season finally came to an end with Wednesday’s 14-2 drubbing at the hands of the Yankees. The game sealed New York’s spot at the top of the American League East standings and provided the final nail in the coffin of Bobby Valentine’s Red Sox career. Boston mercifully put an end to Valentine’s tenure on Thursday after a single season at the helm.

The outspoken Valentine certainly didn’t do himself any favors during his brief time in Boston, but he was doomed from the start. The 2011 Red Sox were responsible for one of the most epic collapses in baseball history. The Boston front office placed the blame squarely on the shoulders of manager Terry Francona, who just happened to be the most successful Red Sox manager in 100 years. Francona took his World Series rings and fled to the warm bosom of ESPN amidst a disgraceful volley of innuendo hurled by his former employers. Francona’s exit should’ve been Valentine’s first sign that all was not right at Fenway Park.

Valentine arrived in Boston with big shoes to fill and a clubhouse full of big egos to massage. He also had to deal with the same problem that plagued Francona’s 2011 ballclub, a lack of starting pitching. The Sox missed the playoffs in 2011 because the organization never adequately addressed a tattered starting rotation. The team made no significant acquisitions to address the rotation prior to the start of the 2012 season.

Not only did the Boston front office fail to provide Valentine with pitching depth but also insisted on moving set-up man Daniel Bard to the rotation. The Bard experiment was a predictable disaster. The young righty regressed to the point that he was optioned to Triple-A Pawtucket. Not only was Valentine down a starter but he was also without Francona’s top eighth inning reliever.

The Red Sox also started pinching pennies shortly after Valentine’s hire. After spending big in free agency in previous years, and signing Adrian Gonzalez to a contract extension for more than $180 million, the Sox were suddenly forced to deal starting shortstop Marco Scutaro in order to clear some payroll to sign free agent outfielder Cody Ross. It was a strange reversal of fortune for the free-spending Bosox and left Valentine without a clear cut starting shortstop entering Spring Training.

A series of curious front office decisions and injuries undermined Valentine’s effectiveness from the start. Factor in Valentine’s famously volatile temper and the microscope of the Boston media and he was doomed. Now the rumor is that the Red Sox are interested in hiring John Farrell as their next manager. One problem, Farrell is already managing the division rival Blue Jays.
While Farrell apparently made a good impression during his time as a pitching coach in Boston his time in Toronto has been forgettable. Farrell’s 2012 Blue Jays were hit hard by injuries but promising young players like Ricky Romero, Yunel Escobar, and Travis Snider regressed under Farrell’s tutelage. The Red Sox will likely have to pay a high price to get Toronto to agree to let Farrell out of his contract. Boston’s front office should worry less about wooing Farrell and get back to the real problem of fixing that pitching staff.